by Vasile Stef 2 months ago in art
Report Story

Ever since I can remember, art has fascinated me 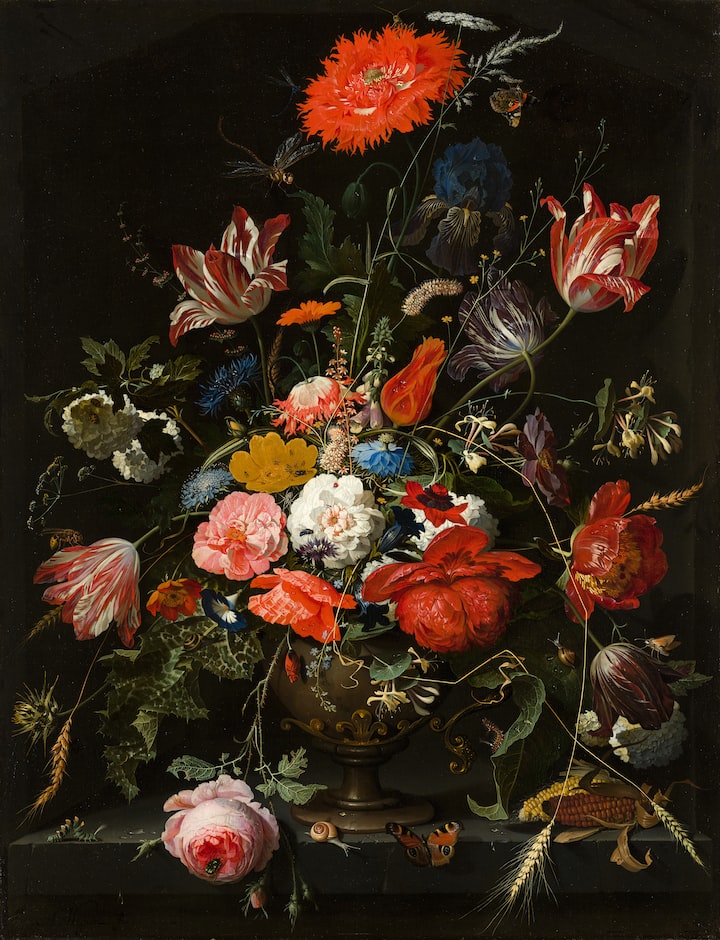 Photo by Europeana on Unsplash

Ever since I can remember, art has fascinated me. It has always been part of my life, but I never thought about its history—how certain ideas and movements came about and what was the artist's inspiration. Now being a student of the arts, the opportunity to research what has always fascinated me has pushed me to find out the base of all my curiosity.

From the early years to now, works of art are known to have portrayed the world the way we saw it: Through landscapes, portraits, animals, and still life, to name a few. With our growth and evolution as human beings, as well as advances in technology and urban planning, our way of life, along with our subjects, mediums, and works of art have advanced and changed. One subject that has stood out over time is the female figure.

As I look through the timeline of art and its history, I have viewed works of art of women and their figure, comparing and taking into account the different mediums and applications used, and the differences within all the works. Looking at the different pieces, the works differ based on materials (which differ from each location and time period), cultural and personal values, and perception.

With each time period, comes new materials to create art with. By using different materials in creating art, the viewers get a different experience from each piece. Each material has a unique texture that can change the way the artist molds the curves and crevices of the woman's natural form.

One thing I noticed while looking through all of the pieces was the different parts of the body that were accentuated and were more in focus than others. In turn, this made me more curious about other cultures and their values of women. Here are some examples of the early artwork that depicts women.

The first piece I'd like to mention is the Venus of Willendorf. Some people wonder whether an artifact of such great value created such a long time ago can be a work of art. By definition, an artifact is, “Anything made by human art and workmanship.” I believe Venus is both.

At first glance, immediately my eyes are drawn to Venus’s emphasized body parts: The breasts, hips, pubic region, and thighs. I believe the reasoning behind the emphasis of these body parts is that the Nomadic people perhaps valued fertility, nurturing of children, and childbearing.

Another feature of Venus that I find beautiful is the face—or, the lack of. In most cases, when you first see someone, you are immediately drawn to the other person’s face. The face is one of the main parts of the body that helps us identify who the person is. Since the artist has inputted no face, this has the viewer's eyes go towards the parts emphasized. I find it extraordinary. The face area itself is surrounded by seven rough hair or crown-like bands around, with no eyes, mouth, nose, or ears. The artist may have wanted the viewers to not identify the beauty of Venus—not just by her face, but of her as a whole.

Venus, realistically, does not look like today’s society’s women, but maybe the artist’s imitation is of what they believe a woman is or what women back then looked like. I have looked at some modern art and artists (@rayreeg and @bloozchicken on Instagram), and I see similarities between these works and Venus, sharing similar emphasized body parts and with posing that embrace those oversized body parts while sexualizing the women. I also believe that much like the artist of Venus, these modern artists imitate the female form or have created these works based on how they perceive the female figure.

With the lack of identity and the parts of the body disproportionate and emphasized, the Venus of Willendorf is one of the oldest, most beautiful women of art.

Another piece that had captured my eye was the Dogu. The Dogu came out of the middle to late Jomon period (14000 to 4000 BCE) in Japan, a society of hunters and gatherers. The Dogu are some of the most intriguing works I have ever come across. Much like the Venus of Willendorf, the Dogu are not alone. There has said to be approximately 18,000 Dogu that have been found in Japan, with 2,000 being found in the Iwate Prefecture.

The Dogu are separated into four categories: The heart-shaped, the horned owl, the goggle-eyed, and the pregnant woman. By looking at the Dogu, it might be challenging to categorize them as they are (sometimes) a mixture of human and animal characteristics.

The Dogu are found placed at grave circles of the Japanese. They have very intricate patterns and shapes made onto them; some believe it may have been influenced by Islamic art. It is said that the different Dogu that are placed at the grave are the links to the afterlife, and what they are to become. Some believe that much like the Sumerian culture, the Dogu are used to worship a higher power or practice shamanic rites. Some believe that because of the broad shoulders and lengthy waist area that the Venus of Willendorf and the Dogu are both used to restore faith and hope to those who are fertile, or who are looking to bear children as at this time, as childbirth death rates were at an all-time high.

One piece of the Dogu that made me really analyze it is its breasts. At first glance, I wasn’t too sure what I was looking at. With the broad shoulders and big arms and legs, I thought I was looking at a man. I had to look twice and I finally noticed its tiny breasts. Nowadays, our society is known for “big cosmetic surgeries," be it big breasts, big lips, big bottom, you name it. So I can understand why some might mistake it for a man. The small breasts may also be a physical trait that the Jomon women had.

Another characteristic I liked about the Dogu was the overall build. Now, knowing that the Dogu is a female, I now admire the fact that she is quite broader. This could be because the Jomon people are hunters and that was how they perceived their women.

The most powerful part, I believe, about the Dogu is its ability to mislead, while also letting the viewer make their own choices on how they perceive the Dogu and what they think it is. The image of the Dogu can be quite misleading to some, but that is what I like about it.

The last piece I'd like to mention is the bust of Nefertiti. Nefertiti was the Queen of Egypt and the partner of King Akhenaten. Her bust was created around 1340 BCE, discovered by German archaeologists around 1912 in the studio of Thutmose. It is said that this bust is just a model as the found oter busts, masks and models of Nefertiti in the studio.

Unlike the Venus of Willendorf and the Dogu, this piece is focused primarily on the head. It seems that the artist created Nefertiti exactly how she looked, but then corrected her appearance to go according with their culture’s beauty ideals.

What I really found beautiful about about Nefertiti is her craftsmanship. Created with a limestone core and an added plaster layer overtop, the artist gave the viewers a flawless and much younger Queen with less facial lines and a subtle bone structure. We can see that Nefertiti had been beautifully painted with rich colors, seeing fragments of blues, reds, and greens all over the bust.

In conclusion, the term "woman" cannot be defined. I believe the reasoning behind society continuously creating art about women cannot be summed up in one answer. One of the answers is beauty. Beauty cannot be defined, as we all have our own definition of the word based on our own experiences, values, and beliefs. Our perception of the female figure also differs from person to person, which is another reason I believe why women as an art subject will be never ending. One might find something or someone extremely beautiful when others may not. Another reason is imitation. As Augustine believes that images and/or actors are “lies and are not the real thing.” With that being said, the artists creating works of women are not giving us the real woman which they base their work off of but their own imitation of it. Looking at these works really got me to admire the craftsmanship more, as well as learning about the different cultures and practices, and how those have an impact on how they view women to give me a deeper appreciation for their differences.