by Barbara Dalton 2 months ago in advice

The reality of our everyday existence 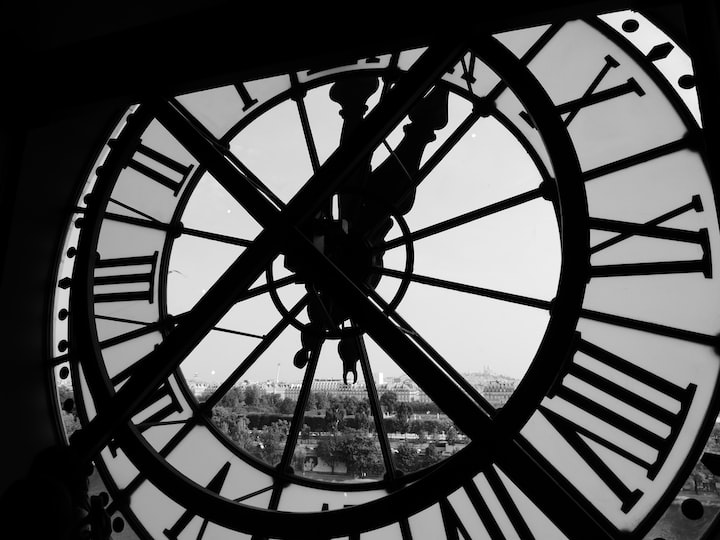 Photo by Murray Campbell on Unsplash

We lose it and find it. We can make it or break it. We watch it and ignore it. We stick to it or forget about it. We use it as an excuse or waste it. We can kill it.

The constant ‘tick tock’ that is ever present in our daily lives. Our existence is measured with each passing second. Our future awaits, hanging in anticipation but never fully guaranteed or known. Sooner or later, it is here, happening, in the present. But only for a fleeting moment before instantly becoming the past. Gone. A moment to be remembered or forgotten, stored and labelled by its emotional impact. Each tick the present, each tock the past.

From our birth day to the day we die, our lives are completely governed and designed around time. Every single day, from the second we wake to falling back into bed. Sometimes we don’t even escape it when horizontal, frustratingly clock-watching as the brain refuses to rest, navigating the past or contemplating the future. Other times we are in denial as the blaring, mind-jolting siren snaps us out of sleep, rudely interrupting dreams and brutally orientating us to another day. You either smack it and roll over to grab some extra minutes of shut-eye or bounce into action.

Once vertical, Time revs up its dictatorship. Each detail of our morning routine subconsciously mapped out according to the minutes available and its importance and necessity. The allocation of it can be quickly adjusted, depending on the influential factors of that particular day which may or may not be expected. A predicted snowstorm may have you leaving home earlier than usual. Discovering the cat barfed on the living room carpet may cause a later departure.

Events are scheduled at particular times and for varying lengths, previously determined by (supposedly) knowledgeable and authorized persons. Appointments, meetings and classes. Exams, concerts and store hours. Transportation requires precision timing especially when directional conflict is concerned. From the syncing of traffic lights to controlling air traffic, where a miscalculation in timing can be catastrophic.

In many industries, operations have to continue without interruption, 24/7. Hospitals and health care facilities require workers to be available on a rotational timetable. Their body clocks obliged to adjust to erratic, unsociable hours in order to keep the business running and maintain continuity of care. Time is of the essence with nursing. Intravenous lines are regulated by their drops per minute; medications prescribed for specific intervals to ensure therapeutic effect and documentation completed in a timely fashion using the military system to distinguish between night and day. Procedures such as dressings take time and patients need time to heal.

Technology is a classic example of time passing. In the old days, clocks were made with hands and pendulums. Some grand and ornate, others with a cuckoo popping out on the hour, every hour. They had weights and needed to be wound regularly to ensure time was properly kept. Now, we depend more on digital mechanics. Numbers are illuminated and change automatically, fading only if the battery dies or the power supply cut.

Appliances show the passage of time. When I was a child, it was considered a luxury to have a colour television and remotes were not even invented. Oh the horror at having to actually get up to change the channel - and there were only two! Telephones have evolved from rotary ones to mobile cellular devices that are stuck to us like glue. The old-fashioned ones were fixed to a wall with a spiral cord connecting the handpiece and there was no such thing as answerphones, call waiting or display. It was painful as a teen expecting a call and another family member was yacking up a storm with someone irrelevant. As such, we had to be pretty organized if we wanted to go out and have fun. There was no cell to pick up and announce your arrival or to excuse tardiness or forgetfulness. I spent hours watching out the window for friend(s) to arrive - or not.

My first exposure to a cell phone was in 1994. I was a district nurse in Auckland, New Zealand, and our administrators were trying to expand the services we offered in the community. They purchased a cell phone and each day, one of us had to carry it around and be available if any unexpected situations cropped up, such as a new client or one on the books in some sort of strife. We were all so against it; not so much for the potential of more work, but more for the fact that none of us knew how to use the darned thing. It was cumbersome - essentially the shape, size and weight of a 4x2 brick. The funniest story was one of my colleagues placing it on the roof while she was loading her nurse supply bag into the car, forgetting about it and driving off. A few minutes later it started ringing; she could hear it, and instantly realised she had forgotten to grab it when she buckled up and headed off. Lets just say if it wasn’t for the weight that it was, it would’ve flown off as soon as she started driving. She simply rolled down the car window and answered the call.

I hate to admit my cellphone is now like my carotid artery; an absolute necessity. Not only is it for communication, whether written, vocal or by video. It is my music, my camera, my GPS, my bank account, calculator, step-counter and car-starter - and that is just the tip of the proverbial iceberg. It is my life! How did I ever survive without it? Times have definitely changed.

Why does time seem to pass by faster the older you get? It used to take forever for Christmas or my birthday to arrive. I remember longingly waiting for the Postie to deliver brown, string-wrapped parcels or poking gifts relentlessly under the tree in anticipation of the big day. Now they come and go way too quickly and I'm left wondering where on earth another year went.

Isn’t that true of any anticipated event? We spend hours microscopically planning and preparing for a special occasion or a vacation and poof! It flies by. I can’t say the same about tasks you dread or simply have to endure, like lining up (for anything), or a long road trip on a boring highway. 'Are we there yet?!' When in the moment, they last forever. Time seems to stop and they drag on and on.

What about the slowing of time when affronted with a frightening or dangerous situation? I experienced this in a car accident years ago and it really does occur. I could see the other car was going to hit us and it all happened in slow motion. The phenomenon is related to the body’s fight or flight response although why it does is not completely understood. As our hormones fire into action, our brain cleverly scans the situation, taking in every minute detail of the impending danger. Is it the onslaught of data that slows the brain, giving us more time to react, or do we flip into another state of consciousness? Whatever it is, it is real and the strangest experience that I will never forget.

As frightening, is how the passage of time becomes more distinct when catching up with friends or family that you haven’t seen in a while. It’s not so apparent that my offspring are getting older but I sure see the incredible changes in other people’s kids. Weren’t they just in diapers? How can they already be a teenager? How did that happen? Then it hits. Years have passed and I am getting older.

It is almost a year since the Pandemic started wreaking havoc worldwide. Our lives have been turned upside down as we were placed on house arrest as lockdowns and curfews were enforced. Despite the rules and social isolation, the days have blended into one, and seem to have flown by. I initially had very little to show for them, other than an expanding waistline from indulging too much and a lack of exercise. I wasted time. I have more recently used the quarantine to my advantage. Although I have watched more Netflix than I ever thought I was capable of, I have begun to check a few things off the never-ending ‘to-do’ list. It takes willpower and motivation to turn a negative into a positive and redirect an unexpected situation to be beneficial. Either that, or it is lost time that can never be reclaimed.

Life is an accumulation of past experiences, current realities and future aspirations. We have 24 hours at our disposal each day but at any given moment, they can be taken away from us without advance notification or choice. Our lives can change dramatically in an instant; the crunch of metal meeting a pole, or simply a decision or event that points your life in a completely different direction than envisioned. We can, however, be more mindful about this precarity of our being, and choose how we spend our time. Find it. Get lost in it. Embrace it. Appreciate it. Own it. It’s your time. It is precious time.

I am a New-Zealand born Canadian exploring my lifelong passion for the English language and how incredibly powerful words can be, whether written or spoken. Glad to be part of a community that supports creativity and new artists.

See all posts by Barbara Dalton →