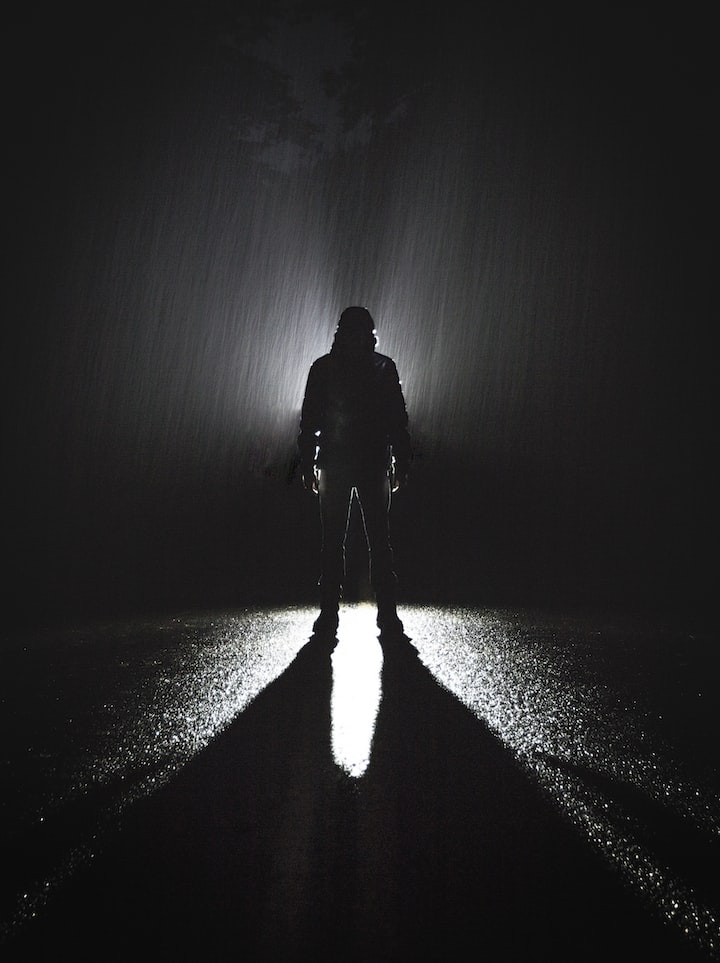 Photo by Steve Halama on Unsplash

A yellow crust filled the lines around Miss Baxter’s misty blue eyes. Her dull brown hair was unkempt, the light from the open window highlighting the split ends; her lips were cracked and littered with flecks of dry skin that she chewed between sentences like gastronomic punctuation marks.

“I haven’t slept properly for weeks,” she said, the volume of her voice curtailed by exhaustion. “I can’t face another dream about him. It’s not that he’s excessively cruel or even that threatening, it’s just this horrible sense that he’s abusing me in some way.”

“Abusing you?” Jackson Tibbert paused between sips of camomile tea.

“Yes,” replied his client, shifting in her chair. It was a comfortable chair – expensively made, combining modern design with the quality of yesteryear. Jackson didn’t buy cheap anything, even if his taste plummeted him into debt, which it often did when work was slow. His clothes reflected his lust for high quality – linen trousers, crumpled in a way that appeared classic, white cotton shirt, designed to fit his narrow waist and broad shoulders, dark brown leather shoes with soles half an inch thick – all custom-made, all expensive.

He knew instinctively how to dress to suit his 38 years – fashionable without appearing like a middle-aged man desperate to cling onto youth. He exuded confidence and charisma, tricking people into thinking him more physically attractive than he actually was.

“You were saying this man in your dreams makes you feel uncomfortable.”

“It’s more than uncomfortable, Mr Tibbert.” (Clients invariably called him Mr Tibbert rather than by his first name). “Violated – that’s the word for it.”

Jackson cocked his head slightly to the right, indicating that the client should continue.

“Violated,” she repeated, as if remembering the word from a distant conversation.

Whatever the situation – the setting of the dream – he always smiles at me in the same way; like he wants to reach out and molest me with those long white fingers. He never actually does touch me, but the feeling that he wants to is just as disturbing.”

“And the settings of the dreams are always different?” asked Jackson, draining his teacup.

“Yes. Once we were on a cruise ship. I was dressed up like a wealthy woman from the early 1900s – like Kate Winslett in Titanic, but thinner. In another, we were jogging in Hyde Park. I heard him running behind me. I knew it was him because the skin on my back was creeping. I tried to wake up, but before I could he drew alongside me and smiled that loathsome smile.”

“And does he speak?”

“Sometimes he asks questions about what I’ve done during the day, other times about my childhood.”

“But there’s no obvious pattern?”

“Not that I can see,” replied Miss Baxter, and Jackson detected a hint of defensiveness.

“Okay, Miss Baxter, I’m going to put you into a light sleep. You will be quite safe and may even find that when you dream I am there with you. I’ll make sure this man does nothing to harm you.”

Miss Baxter was sitting with her back to a splendid willow tree staring across a placid lake, upon which bobbed a small rowing boat, when Jackson entered her dream.

“Good day to you,” he said, deciding old-fashioned greetings were in order, particularly as Miss Baxter was dressed in Edwardian-style attire, with a small parasol clutched in her left hand. She looked up and smiled. She was far prettier and younger in her dream.

“I’m glad you’re here,” said Miss Baxter as he sat next to her in the dewy grass.

“I said I would be. No signs of our man yet then?”

“No, but he’s here somewhere – watching us.”

A figure appeared across the lake – a man, strolling across the meadow. He wore a black suit and carried a cane, not in a comical Charlie Chaplin fashion, but as if he could convert it into a weapon in a second.

“That’s him,” said the client.

And he was on their side of the lake, legs slightly parted, hands resting on top of the cane, a molesting grin cracking his white face.

Miss Baxter shrank back against the tree.

The man continued to smile as Jackson approached, his off-white teeth stark against ghostly skin.

“You have an advantage over me.” Jackson stopped a few feet from the stranger.

“Old-fashioned courtesy,” said the man, who had small ears like inadequate wings, jutting from each side of his long head. “I like that in a man. We have something in common.”

The man’s brow creased into a frown, although the smile remained fixed.

“Just to be told, or shown, what it is that brings you here,” said Jackson. "Miss Baxter finds your regular appearances disturbing and she’s such a pleasant woman – rather stale smelling where she’s let her personal hygiene regime slip, but sweet-natured. She deserves to sleep properly doesn’t she?”

"She doesn’t deserve to sleep,” said the man, now perched on the end of a four-poster bed, legs neatly crossed, leaning on his cane. The bedroom reminded Jackson of a set from a Hollywood Elizabethan drama – stone walls hung with tapestries, burning torches that made the stranger’s sickly face squirm with shadows. “She deserves to lie awake every night, tossing in sweaty sheets, jumping at every sigh and click her house makes; she deserves every laden walk to the kitchen to fetch a glass of water in the vain hope it will help her to drift off; she earned every sickening sensation of falling and jolting back to wakefulness; every paralysing feeling of anxiety; every desperate prayer that the terrible fears won’t turn into something real.”

Jackson sat in a throne-like chair opposite the foot of the bed. “Why?”

“Dirty, soiled, contaminated,” said the man through his Halloween grin.

“Don’t I make you feel like that?” The man reached a dusty, white hand towards Jackson, who fought the urge to flinch away.

“When were you born?” asked Jackson.

“How long have you existed?”

“Thirty, thirty-two years. I don’t know for sure.”

“How old was Miss Baxter then?”

“You come and go, don’t you – from the subconscious to the conscious, I mean.”

“You haven’t been such a regular visitor for years, have you? Why are you here now?”

“What are you getting at?” the grin faltered just a fraction.

“Did your appearance coincide with any particular incident – the re-appearance of someone real in Miss Baxter’s life – an ex-lover, maybe?”

“He’s long gone and I’m better off without him.”

“Someone else from her…your past?”

The man stood and walked to a stained-glass window on the far side of the room, cane tapping on the cold stone floor.

He scuttled across the room, pressing his face close to Jackson’s. His breath stank of sullied bed clothes left to fester. The grin had gone.

“An uncle,” he said, sitting on the bed, shoulders slightly slouch. His cane dropped to the floor. “My father’s brother – my favourite.”

“Him and my mother. Together.”

As he spoke his cruel grey features shifted like molten lava or soft clay into those of Miss Baxter. “I saw them in my parents’ bed, sweating and panting. I felt disgusted.”

“No,” wept Miss Baxter, “with myself. I wasn’t supposed to see. I shouldn’t have opened the door.”

“And they shouldn’t have let you carry the burden,” said Jackson.

“They told me to keep quiet. They tried to be kind about it, but I knew they were angry – that they hated me for spoiling things.”

“Uncle Geoff, yes he’s back. I saw him at my parents' two months ago. He hugged me as if nothing had ever happened. He’s been living in the States with his wife and two children. He’s old now – over sixty.”

“But seeing him still brought things back to the surface?”

“I didn’t realise I even remembered it. I just knew that when he hugged me, my skin crawled and I felt sick.”

“Will you come with me and speak to your conscious self?” asked Jackson.

“She’s waiting by the lake. I think the two of you should have a good long chat.”

Miss Baxter had left Jackson’s office shaken but unburdened. Now that she understood what the man represented, he was unlikely to reappear, Jackson explained.

“Now I just need to deal with the reality of knowing my mother cheated on my father with his brother,” laughed Miss Baxter cheerlessly. “And that I was made to feel guilty for it!”

Miss Baxter’s plight was on Jackson’s mind as he drifted into sleep that night. He decided to take a stroll on the shared dream plane. It was the mental equivalent of a brisk country walk. Often he would create trees and flowers, meadows and mountain passes to add interest to the amble, other times he would simply bask in the huge expanse of nothingness, taking care to avoid other tourists and the creations they had crafted from the ethereal material of the plane.

He was surprised to see a man waiting a little way along the grassy path he had created for this particular walk. As Jackson drew nearer he saw that the man was aged around sixty, hair thinning and grey. There was nothing of note about him, other than the carving knife jutting from his chest.

“Jackson Tibbert?” he asked as Jackson came to a halt just in front of him.

“Geoffrey Baxter. I believe you know my niece.”

“I’ve had that pleasure, yes.”

"Well it wasn’t my pleasure,” said Baxter. “It’s her that stuck this into me.” He flicked the handle of the knife with a finger, as if it were a fly that could be frightened away. “She stuck it there a few hours after leaving your office. She told me all about her visit and about what you told her. I was hoping I’d get a chance to meet you before passing over.”

Baxter pulled the knife from his chest, which sucked at the blade like a hungry, bloody mouth.

“Just think yourself lucky you can just wake up!” he said, as he buried the knife in Jackson’s head.

Jackson sat up, searching the dark room for remnants of the dream. This was the downside of the shared dream plane. The dead often popped in on their way to the next stage.

Miss Baxter had obviously recovered from her guilt and placed the blame firmly with her uncle.

Jackson shuffled through the flat to the kitchen and filled the kettle. He reached for the box of camomile teabags and then hesitated. Next to the box stood a large bottle of vodka.