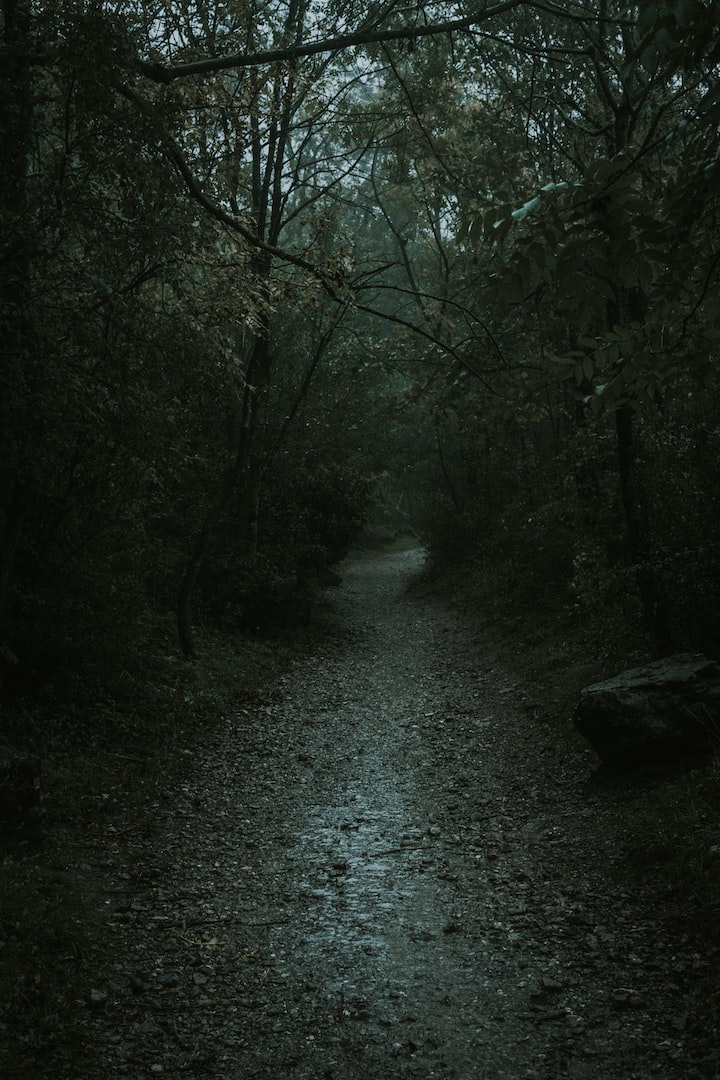 Reverend Victor Van Hewett gazed solemnly over the angry crowd that gathered in front of his large estate. His beautiful young bride came to stand by his side, clutching her shawl tight about her shoulders and shivered at the sight. “Do you really have to go? I am frightened of what the night could bring.” Victor noticed her give a sharp glance at the moon, a look of unease crossed her features.

“Two women are dead and another is missing, Rebecca. It is my duty to protect this town, to protect you.” He turned, gathering her cold hands into his. He tilted her chin to look into her emerald eyes.

“Be safe and come back to me, Husband.” A tear grazed her cheek as she reached to kiss him.

He turned back to the waiting crowd, they clutched weapons in dirt-stained hands. He nodded to James who led them into the woods beyond.

“She’s been spotted in the mountains,” said James, who came to walk beside Victor, “She has been seeking refuge in a cave for a fortnight, ever since the boys burned down her hut.”

Victor nodded in response. His mind drifted back three years ago, to 1686. The year his wife had been found murdered by the stream. Her heart had been cut out. He had always assumed it was the work of a vagabond, or a madman, drifting from town to town in the county of Bristol.

The dark woods were quiet as the crowd marched on. Small creatures hid or took flight as they went past. Strange noises echoed, animating the woods around them; hidden eyes burned into them from the dark, enhancing the unease of the men.

“They say that the women were found with their hearts cut out,” whispered Jacob over Victor’s shoulder.

“Why would she cut out their hearts?” asked young Billy.

“Dunno, maybe it’s some sort of sacrifice to the devil himself,” Jacob replied.

“She looks a thousand years old,” Jacob shifted his axe to his other shoulder. “I’ve seen her with my own eyes.”

“Quiet!” Victor snapped at the young men behind him. “We must not let her hear our approach.” He glanced up. The tall moss-covered trees shielded the light from the bright moon. He sent out a silent prayer for protection.

They walked on in silence for a while, the steep incline of the path stealing their breath as they went. They climbed for what felt like hours until at last James stopped and turned towards a small worn path that led east around the hillside. “This way,” James said, “step lightly.”

After a distance, one side of the path dropped off sharply and they had to walk slowly, clinging to their opposite side. They then came to the entrance of the small cave. Just inside is where they found her, sleeping on furs surrounded by the bones of small animals. The stench of rot hit them like a cannon. She screeched wildly as two men took hold of her.

“Quickly men, cut out her tongue lest she cast a spell on you!” James called out to them. A sharp crack of thunder announced the arrival of rain and briefly illuminated her pale, malevolent face. One of the men stepped forward with a knife and they pried open her mouth; her tortured howl echoed around them.

Once they had found the main path, they bound her arms to a large post at her back and pushed her forward to walk down the steep hillside before them. The journey back was wet and miserable, but their victorious capture gave them strength. Onward they marched her towards town, where fate awaited her. Rope was slung over a branch of a large Oak tree; men, women and some small children had gathered around its wide base.

She scowled at the onlookers, spitting blood at them as she was shoved forward. The women looked fearful, and the men determined. She was forced up onto a large crate and the knot was tightened at her neck. She pierced the crowd with her glare, silence fell over them as they waited. Then the crate was kicked out from under her, and she gasped and thrashed until slowly she stilled, pale green eyes turned up towards the moon.

Back in his own bed, Victor clung to his wife, trying to shake the night from his mind, choosing instead to think about his wife. Rebecca seemed to be too young for him when they first met, but she had stolen his heart. She was always beautiful to him even though she often suffered from fatigue and illness. However, she has since gained her strength. He rested his face in her auburn hair, she smelled of lavender and her soft breathing pulled him towards sleep. Tomorrow would be a better day. God has given his protection this night.

Rebecca awoke to the bright glow of the moon and wiped the sweat from her brow. Her throat felt dry. She set her bare feet to the floor and quietly left the room, water pitcher in hand as she headed towards the kitchen. Once there, she refilled the pitcher from the water reserve and sat down to drink a small glass. Just outside the wind picked up strength and she closed her eyes to its song. After a few moments she sat up and walked towards the corner of the room lowering herself to the floor. Peeling back the corner of the carpet, she removed the board that covered her hiding place and pulled out the box. After a quick glance towards the hallway, she opened the lid. The smell of blood filled her nose and she smiled to herself. This is the final one. She took the heart out of its box and whispered, “One for beauty, one for strength, and one for power. Let them nourish my years ahead. Til the day I shall begin again, reborn in beauty.” She began to eat.

Receive stories by Corrin Harris in your feed
Corrin Harris
Read next: 'Sweetheart' (2019)