The Room Where It Happened

by Des Roundtree 13 days ago in fiction 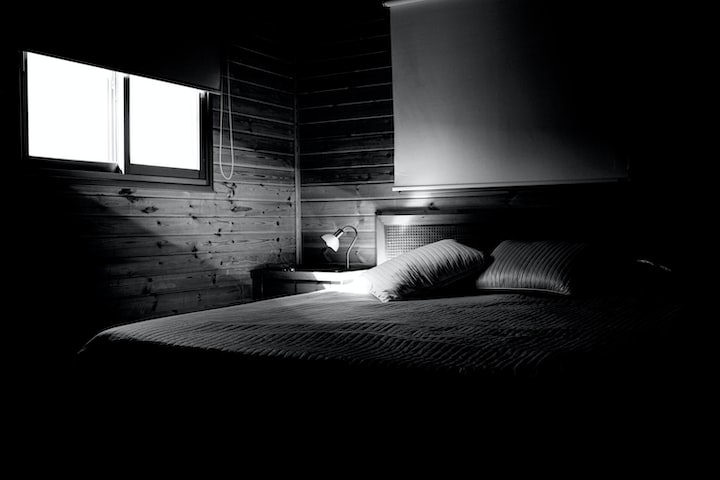 The unforgiving cement rested beneath the soles of her boots, its grit made them crunch against the floor.  She knew she couldn’t feel it but somehow she could, her feet could still feel the ache from the cold.  Tears began to nip at the back of her eyes as she turned and took in the place where she spent six hundred sixty-seven days fighting for her life.

This had been her prison, the place where the marathon of emotions called fear and survival played out like a movie she couldn’t tear her eyes from.  This was the place where she was the uncooperative pawn in someone else’s sick and twisted game.

She breathed in deeply and tried to steady her pulse.  The anxiety that accompanied being there refused to be ignored and her stomach turned.  Her eyes darted frantically to the door to make sure it was open, always.  She constantly reminded herself that this was different, this was her choice.  She was here to face her fear, and to conquer whatever was holding her in the cell of a life she was now living.

There was a paralyzing fear that came with surviving an attack that people don’t often discuss.  Everyone called her “lucky” and “blessed.”  They smiled and hugged her and thanked God.  But this place sat here, it called to her still - it waited to be addressed like the proverbial elephant in the room.  It filled her worst nightmares.  Its darkness is what seemed to complete her now.  The pain and fear were the only things that seemed to make sense anymore.

She didn’t feel lucky or blessed.  She felt cursed instead.

She looked to the ground as the slivers of light played with her mind and made shadows dance across the floor where dust mites still swirled happily.  The memories of lying on the metal bed as she watched that same dust held her thoughts for longer than necessary.  When she was tied to the bed, she imagined they were fairies in a world far away from there.  A world where she was safe and life was very different than it was. She prayed for a life that didn’t cross paths with that man.  She wished for a life where she was still whole.

She breathed in deep.  It smelled the same as she remembered, stale and musty like the air of a basement should be.  She knew she wasn’t underground but when she screamed herself hoarse everyday she began to believe she was.  The grey walls were pocked with air holes if you looked closely enough.  She remembered the way they felt as she scratched at the walls, her nails ripped to the quick before he handcuffed her to the bed as punishment.

There was a dark stain, large and shaped like the continent of Africa, where her blood once dripped.  She touched her ribs where the raised scars itched angrily.  She grabbed at her wrists where they burned, the darkened rings still visible.  When she was rescued the plastic ties used to hold her hands had cut her so deeply, at the hospital they rushed to save her hands, not just her life.

Her memories are still as fresh as newly turned earth.

Tears fell from her eyes and she wondered if that was what being free felt like.  If it was, she thought it felt an awful lot like a pain to her that would never ever heal.  She didn’t want to live in that space anymore, trapped in that room and all it held.  All she craved was to live in the comfort of being numb.  She understood that could sometimes equal freedom to a survivor, the thickness of numbness kept her warmer than a blazing fire on the coldest night she could remember in that cell.

She sat down, the frame squeaked under the weight of her body.  That noise would haunt her until she no longer walked this earth.  When she escaped and was able to return home, she moved her mattress to the floor so she never had to hear anything like it again.  She cried herself to sleep as she remembered the feel of the metal and stared at her bedframe until after two days she had it removed.

When she returned home she touched her mattress but still prayed that life would allow her to forget the pressure of his body above hers, the taste of him in her mouth, the feel of his hands in places they were never welcome.  She understood that time would heal her physically but emotionally she was still very much tied to the things that happened in that room.  It was the keeper of so many moments of strength, weakness, fear and then finally elation as she stepped away from it, barefoot and bleeding into the sunlight.

She stood and walked to the opposite corner where a stool and small table rested.  In her time there it was where the Bible sat perched open.  He marked the pages she was to read each day, each of them would now forever be stained with her blood.  She sat on the stool and closed her eyes remembering the first night he cut her, the blade sliced deep into her ribs.  He needed to “remove Adam” from her.  He needed to punish her for her original sin. He read scripture as he did it, loud as if a congregation sat before him as she screamed and pleaded for her life.  Each rib bore his mark, deep and black from infection. Each bone had been broken, her last two ribs removed with a butcher knife.  She lost consciousness after the first slice and woke up to a raging fever, the sick drip of her blood into the small bucket overflowing with her blood.

He made her watch him eat her ribs for dinner.

He read the Book of Revelation and prayed over the mess he felt he made.  He did not understand that she was dying.  He thought he had freed her of her demons, in her delirium she confessed her sins and begged for forgiveness.  She agreed she was poisoned, she agreed she needed him to finish what he started.  Soon, she begged for death.

As she bled beneath him, he raped her to free himself of his guilt.  She closed her eyes as he grabbed her face and pried her eyes open with his bloody hands.  This became a ritual during her days in that dark place.

A mirror rested on the floor in the opposite corner of the room.  She stood and walked to it, touched its surface.  She lifted it and met her scarred face.  Raw scratches lined her cheeks, her scars - raised and angry - glared back at her.  Her lips remained split open, held together with thick black stitches, still bruised.  Her scalp was left with the unevenness of newly scarred skin, her arms striped a violent purple and red.  Black thread and tape held her together like a sad human rag doll.  Rings circled her eyes, hollowed out cheeks matched her grey pallor.  She blinked back her tears slowly and placed the mirror on the bed frame.

The police officer opened the door slowly, “Are you ready, Miss?”

She turned to him, “Yes,” as she walked out once more and closed the door.

This was the room where it happened.