by Aldo Palaoro 12 months ago in supernatural
Report Story

Some places are best left alone. 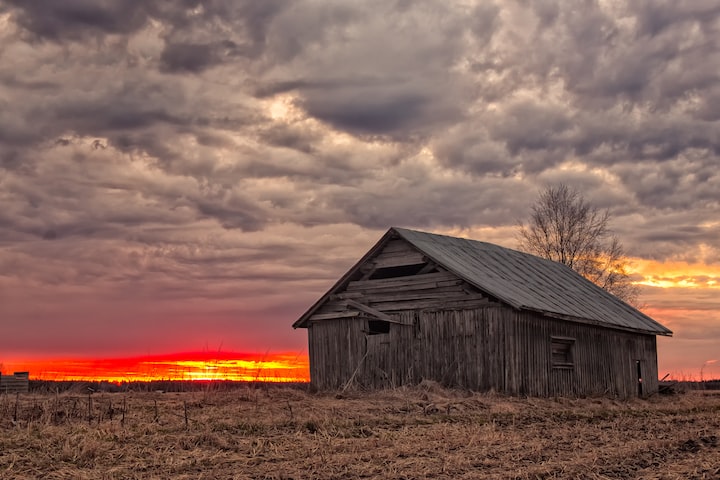 Avery hoisted his worn wood-splitting ax above his head, once again bringing it down to split a dried oak log in two, the ax head thunking into the massive hickory stump beneath it with a satisfactory crack. He paused to reach into the patched pocket of his overalls, pulling a ragged handkerchief from its depths and placing it to his brow, wiping away the acrid sweat attempting to bite at his eyes. “Been at it a while, ol’ boy, maybe it’s time to call it a day,” Avery mumbled to himself, looking at the handkerchief in his calloused hands, now saturated in his perspiration. His eyes turned to the periphery, locking onto the dilapidated building, once considered a barn, that sat on his property. It had always been there, according to the elderly couple he’d purchased his plot from, of whom had claimed it was best to simply leave it there. “Best to let the dead rest,” he remembered the man saying, his stare shifting from the collapsing barn to Avery, a sense of knowledgable authority in his eyes. Avery focused at the nearly disintegrating door, some sort of primordial instinct deep in his gut telling alerting him to danger.

After some time, Avery broke his gaze, his hands habitually refolding his handkerchief and replacing it in his pocket. He turned to his homestead and headed in for the day, gently patting the trusty ax on the bottom of its handle, its head still burrowed in the hickory stump. His wife, Janine, greeted him from her spindly wooden chair as he entered the tiny home, her hands bouncing back and forth, creating a blanket from large balls of yarn. “Where’s the boy at?” Avery asked her, her response being a nod towards the kitchen area. Avery sauntered across the creaky floorboards into the kitchen a room over, finding the nine-year-old boy sitting at the table. A copy of E.B. White’s “Charlotte’s Web” was peeled open in his small, alabaster hands, his dirty blonde hair poking out the top of the novel concealing his young babyface.

He put the book page down on the table, tilting his head up to lock eyes with his father. “Yes, papa?” He said pleasantly. “You gettin’ your reading done? That’s good; you’re a smart boy. You’re gonna work with your head someday, unlike your father.” Avery said as he walked up to his young son, ruffling the boy’s scraggly hair, the smile of a proud father gracing his lips. “But today, you gotta work with your hands!” Avery chuckled, “the wood is all cut right out there. Need ya’ to stack it under the awning for your papa, gotta keep it dry.” The boy bowed his head slightly in understanding before hopping out of his chair, “yessir,” he hooted as his feet pattered across the rickety flooring and out the door. Avery twisted his upper body following the boy’s path as he hollered so there would be no confusion “just stay away from the barn!”

“Damn thing just don’t sit right with me,” he said as he returned to Janine, kissing her forehead. She replied without taking her eyes off the looping yarn in her hands, “he’s a good boy, he knows the rules, darlin’. Ain’t a little troublemaker like his father was.” Avery grunted in acknowledgment as he plopped into his chair at her side, readying his tobacco pipe from the small table at its side. “I know, that’s what worries me, sweetie. Its the good ones the bad things happen to,”

For the most part, the night remained an uneventful one; it wasn’t until deep into the night while the family slept that Avery awoke suddenly, a deep thundering inside his head. He sat up quickly as his hands snapped to the sides of his head, grasping at his hair, cold sweat drenching his body as a cacophony of deafening drum beats roared in his mind. All he could see was that decrepit barn, something inside crying out from its timeworn prison. A presence full of anger, an evil apparition, longing to have the chains that bind it loosed. Avery couldn’t bear it; he crept from his warm bed, seizing the double-barrel shotgun that sat in the corner of his room as he covertly traversed the house as not to at that time alarm his wife or child.

He advanced across the damp clearing towards the decaying barn dressed in little more than his quickly laced work boots and clad in threadbare long johns; the barrel of his rifle leveled ahead of him. The nearer he came to the barn, the more reticent the booming drums became until they silenced all together as Avery closed in on the barn door. He put his shoulder into the door, stifling the heavy breaths that came with fear as he put his face up against the barn’s shabby door, his eye finding a fissure in the long deadwood. Avery could make out voices, uniformly chanting in some sort of foreign language. There was lantern light flicking from within, taking Avery what felt like an hour; he began to discern lengthy men clothed in hooded robes adorned with silver patterns on their sleeves, all standing nearly without motion. Their heads solemnly bowed in invocation. Avery could feel his heart booming with horror at the sight of these outlandish intruders.

Without a sound nor a warning, a heavy claw tore into the meat of Avery’s shoulder, ripping him up and into the sky. A freezing horror shot across his neurons, blackness enveloping the man’s every pore. His life extinguished quicker than his screams could escape his lungs.

More stories from Aldo Palaoro and writers in Horror and other communities.