Tale of the Fisher child 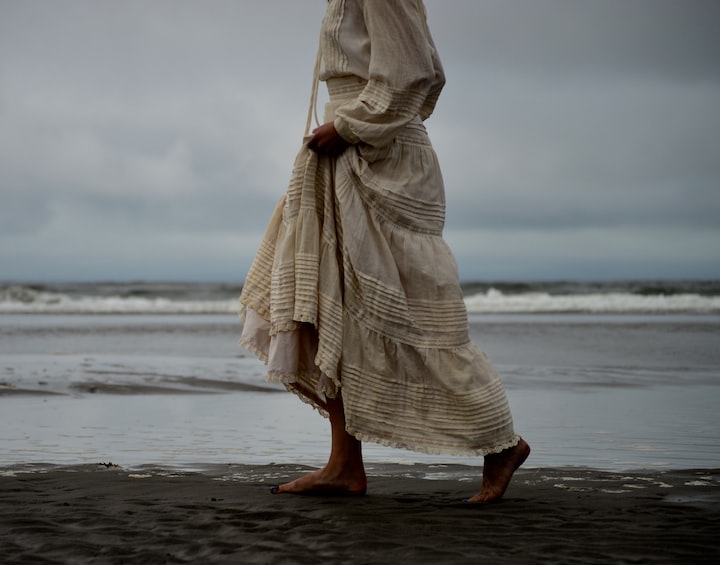 Photo by Esther Ann on Unsplash

I spend my days sinking into pulp-like sand. A part of me is still waiting for her to appear in the breaks of the waves; my Ella, with her hair that wraps and tangles like seaweed and her skin that has the sheen of a pearl. She didn’t leave me with a reason, only with the weight of a memory: It was cold and the water was violent. Her eyes seemed to mirror the forecast.

‘Something has happened,’ she told me.

And as I leaned to take hold of her hand she launched herself from the rockface, into the depths of the cove. I could hear her sobbing as she swam out, but the current was too strong for me to follow in the boat. I called for her relentlessly before the tide drew out and eventually I fell into a restless sleep on the limestone. When the night met with the light of day, every fiber of my being expected to see her back again, walking the shoreline as if she never left in a frenzied state at all, but she was nowhere. I swam for days, every waking moment that the tide allowed, and still, nothing.

My theories have been etched into the bark of trees and the stone walls that surround the haven where we first met. I have considered that the hierarchy of her species discovered our bond and that our separation was forced by a domineering entity, though I’ve never met another of Ella’s kind. She was human in every way but interacted with the ocean as if she were one with it. There was never any need for her to surface for breath and the pads of her fingers never pruned from the constant wet. She spoke like a real person and kissed like one, too. I honestly never thought to ask what she may be, I was in love enough to simply not care. There was no need to explore the technicalities.

I’ve been awake for seventy two hours. The weather hasn’t been this bad since she left me and I’m hoping that the storm brings her back to where she’s safest, in the shelter of the stone formation on an island three miles from the mainland. I’m on the brink of unconsciousness and fatigue is desperately trying to pull me under when suddenly I hear her speak.

‘Look at what you’ve done,’ she says.

I whip my head around to face her. My Ella. She looks worn. Battered. Dark.

I glance down at the baby suckling at her left breast, and I am at a loss for words. Ella’s hair is matted. Her eyes are sunken and so, so black.

‘A child,’ I manage to remark.

She hisses and tosses the infant at me as if it were some plaything.

I cradle the baby to my chest and scan over its face. Its skin is dry and peeled from the saltwater. It seems human.

‘This shouldn’t have happened. We have disrupted the lore and now I must pay.’

Ella begins to step backwards and I inch forward each time.

Exasperated sobs begin to ripple through her.

‘I wouldn’t have had to if you never did this to me,’ she spits at the baby as she retreats further away.

‘Ella, please!’ I’m at her side in seconds, grabbing at her arm so that she can’t escape again. She thrashes in a bid to release herself and in doing so she roughly jerks the baby and I to the ground.

The baby is crying. Thunder and heavy rain beat down around us. Ella is on the edge, ready to jump.

‘What about the child, Ella? You can’t leave the child!’

I haul myself from the ground and make another attempt to restrain her, but before I can get close her blood curdling shriek freezes me in my place.

She doesn’t sound malicious this time, she sounds scared, defeated, almost pleading. Within an instant, a cracking strike of lighting doubles down on her slender frame, reducing her to a blinding flash of mere light. She is gone; a product of a power beyond comprehension.

The child squirms in my arms, frightened by the ear-piercing noise. I don’t know what to do with this thing, this thing that killed my love. It is human, and maybe that is how my Ella got found out. If I had have known that this would be the outcome of our interactions, I would have stayed away. As enticing as Ella was, I could have kept enough distance to avoid this cruel end. She was right, it was my fault. I did this. I am to also pay, and it is through raising the child that came between us.