The Last Light in Evening

by Terrye Turpin 9 months ago in psychological
Report Story

Dread sets with the sun 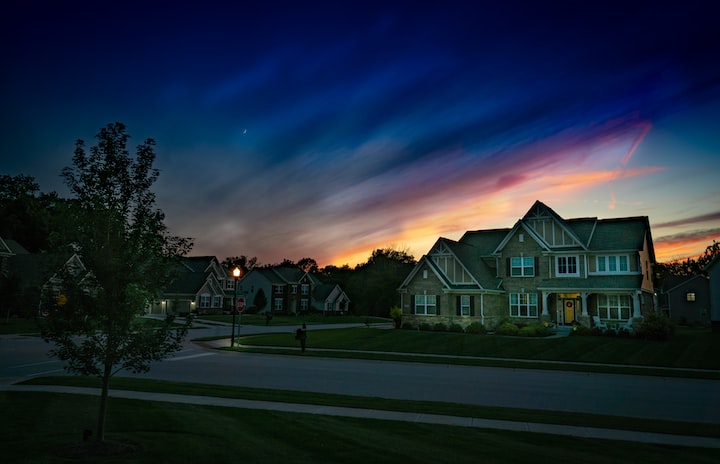 Photo by Kent Rebman on Unsplash

My mother scrubbed the sink — dip, wring, drip, wipe. She washed the sink after she washed everything else. Even before the plague, she scoured anything that came into the house. Groceries, mail, books, clothes — it better all be waterproof.

“Come here, Shirley,” she called from the kitchen.

I put down the paperback book I’d been reading. Slaughterhouse-Five by Mr. Vonnegut, required reading for my 9th grade English class. The warped, watermarked pages of the book unfurled like a flower opening to the sun.

Ma held out a bucket of soapy water, bleach fumes and steam rising from the bubbles at the top. She wore a faded, full length apron over blue uniform scrubs. She took to wearing them every day, even when she didn’t have a shift at the nursing home. A flowery print scarf hid her hair.

“Go scrub down the car,” Ma said, holding out the pail.

“Can’t it wait,” I asked. “He’s not going anywhere.” Pa had ventured out that morning for supplies. He brought back a handful of shriveled potatoes and a cardboard carton of unsweetened almond milk. Then he laid down for a nap. He slept most days now, since he’d lost his job.

I set down the bucket while the garage door buzzed open. Sunlight streamed in. Off in the distance I heard the growl of a lawnmower. Tall weeds had taken over our yard because Ma didn’t want us outside any more than necessary. If I walked out to the end of the drive, I could see to my friend Lisa’s house. In a normal year we’d be laying on a blanket in her back yard working on our tans.

While I sloshed hot, sudsy water over the car’s door handles, I thought about what my life might be like when we got out of quarantine. Next year was supposed to be my first in high school. There’d be older boys, boys with cars. I pursed my lips in the Buick’s side mirror, imagining a kiss. I’d probably be held back instead. Ma didn’t trust the internet, so it had been the first thing dropped and I couldn’t get my assignments. I’d been working through that paperback four months now. How was I supposed to write a book report with all the washing going on?

The car door squealed as I opened it. I leaned in and slapped my rag across the steering wheel. Pa left twice a day, sometimes at night, looking for the things on Ma’s list. Toilet paper, eggs, bleach. He’d come back with weird stuff instead, like that Jack-in-the-beanstalk fellow. Hardly ever eggs, sometimes bleach, never toilet paper. I’d settle for magic beans. Yes, I would. No toilet paper was a rough deal. I could always peel off the pages from my book.

When we first went into quarantine, my English Teacher, Miss Holly, brought by my assignments, the book, and a package of toilet paper.

“Eric said you all were running low.” She stood there on our porch, clutching that paper. Funny hearing my teacher call Pa by his first name. Ma didn’t invite her in, which was a good thing because then we’d have to wipe down everything she touched, in case she’d been exposed to the virus. Miss Holly belonged to the same church we did, back when we were allowed to leave the house. She used to call our house sometimes, when we still had phones.

After my teacher left, Ma let me keep the book and the assignments, but she threw away the toilet paper. I expect it might still be out there in the trash can, they stopped picking up the trash right after that.

With all the Buick’s doors propped wide, I gave the vinyl front seat a good soaking, then wrung the wet towel out onto the passenger side floorboard. Ma would check my work, and if the car didn’t smell clean, I’d have to scrub it all again.

I set the pail down on the cement floor of the garage and climbed into the back seat, my favorite part of the job. Sometimes I’d find stuff back there. Once I pulled a half-full pint of vodka from under the front seat. It tasted like fire and cough medicine and made me woozy, like I’d sniffed a toot of bleach water. I stuffed the bottle back and Pa never said anything, but the next day it was gone.

The trick to a good cleaning is to push your rag down into the seams, where the back of the seat cushion meets the bottom one. I hummed a little tune. Some days Pa would forget and leave the car keys under the mat, but not today. I sang out loud and shoved the towel way in there when it caught on something. Thinking it might be a spring or the seatbelt latch, I yanked on the rag. It flew out with a loud rip, slinging soapy water onto the roof of the car.

Now I’d done it. I held up the ripped towel and squeezed out the water, then reached in to pull out the strings stuck behind the seat cushion. They came out with something shiny and silver tangled in the threads. A diamond bracelet. Maybe rhinestones, but pretty just the same. I held it against my wrist, admiring the way it caught the light. Like little stars.

“How did you get in there?” I asked. The bracelet, being an inanimate object, didn’t breathe a word in reply. I tapped the tiny charm dangling near the latch — a silver letter “H.” Ma’s name was Vera, and no way she’d have anything this fancy. I stuffed it in my pocket.

Pa took the car out as the sun set, after supper, which was canned beans and the taters he’d brought in that morning.

“Try Wal-Mart again,” Ma yelled out the front door as he backed the car down the drive.

We settled in the living room, Ma and me. She turned out all the lights, and we studied the news on television. It was almost like before, except now they only ran re-runs of old shows and the news. On the screen, a reporter with teased up hair stood amongst a sea of cots. The cots were all draped with cloth, like mosquito netting but thicker. Once in a while you could see something black and twisted moving around under the cloth. The reporter mentioned sanctuary. I wondered if they had toilet paper there, or if those people even worried about stuff like that.

Right after the news, the power went out. The TV blinked off, quick as that, and it left us in pitch black.

“Guess I forgot to pay the bill,” Ma lied.

The only light came from the moon shining in through the window. Too dark to read my book. I wondered when Pa would get home.

“I found something in the car,” I told Ma.

She held up the bracelet and drifted over to the window, little clear stones winking in the moon’s reflection like tiny stars. Ma said nothing. She stood there, rubbing her fingers over the silver H at the end of the bracelet, then reached over and closed the blinds.

When she left the room I stayed put, wondering what might happen next. I heard a scraping sound from the kitchen and when I wandered in, holding to the walls in the dark, I saw she’d set up a stiff-backed chair facing the back door. Standing behind her and squinting through my fingers, I couldn’t make out what she held in her lap. Could be Pa’s shotgun, could be her broom.

Ma didn’t stop me when I walked out the front door. I’d forgotten what it felt like to stroll through grass barefoot. The weeds tickled my thighs as I lifted my arms to the sky. Above, so clear now, the stars in the sky, the last light in evening, until Pa’s headlights turned onto the street in front. I wondered if he’d found toilet paper.

*Originally published April 2020 in The Junction on Medium

More stories from Terrye Turpin and writers in Horror and other communities.