Me Marc and It

A tale of dark roads and a bickering couple 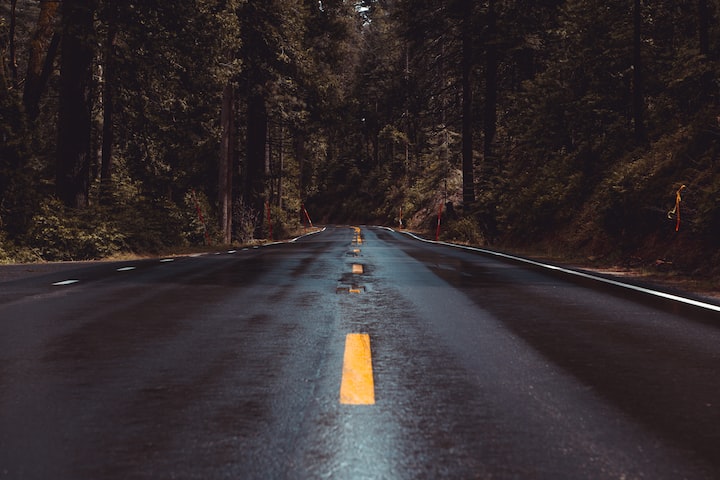 Photo by Patrick T'Kindt on Unsplash

Marc was filing his nails. They were already buffed and manicured to perfection, but he was letting me know he was bored. White flecks snowed down onto the car seat between his legs, some onto his lap; he brushed them off irritably.

Perhaps he just wanted to look perfect because he knew the car was going to break down.

Marc had admitted to me that this was his fantasy – to run out of petrol in a dark lane and have sex on the back seat, ideally with someone else watching.

“How long till we get to your brother’s place?” he asked.

“Mind if I smoke?” asked Marc, already lighting a cigarette.

“As long as you open the window,” I said.

Marc tutted, but wound the passenger window down.

“It just gets in my eyes and I need to see the road,” I explained.

“Are you sure you don’t mind meeting my brother?” I asked. “I know we’ve only been seeing each other a couple of weeks. It’s not like meeting my mother or anything; I just think the two of you will get on.”

“I’m sure we will,” said Marc, although his tone suggested otherwise.

“It’s actually our two-week anniversary,” I said. “Since I pulled you at The Oak.”

Marc took an exaggerated drag on his cigarette and blew the smoke into the car. “It seems longer,” he said.

It wasn’t hard to see why he’d had success with men in the past. His features were boyishly pretty, hair light blond, fringe hanging across his high forehead. But his brittle personality was seeping through now, etching lines around his mouth and eyes, draining colour from his cheeks.

I knew what had attracted him to me – middle-aged, balding and fat round the middle – the £50 note I’d held under his nose when I’d asked if he’d like a drink. And all the subsequent notes I’d waved at him or thrust into his hand since.

We were passing through the middle of a dense wooded area. The trees formed a natural arch over the road. I squinted, straining my eyes to see ahead. A man stepped out from the trees to our left. He was dressed in a long dark coat and a neck scarf that covered half his face. He stared into the passenger window as we drove past.

Marc shivered. “What a freak.”

“Just someone taking a stroll,” I said.

“Don’t tell me you’ve never taken a walk through a wood after dark,” I said.

In my head, I was saying: Isn’t that part of the thrill, Marc? The risk of being caught by a casual passer-by? Isn’t that the part that really turns you on?

Marc tutted and took an angry drag on his cigarette. It was almost as if he could hear my thoughts.

I slammed on the brake. The man was in front of us, his dark-clad form like a shadow in the headlights.

“How did he get there?” asked Marc, voice higher than usual.

The man began walking towards the car, his right leg dragging behind the left. As he drew nearer his face, or the top part, became visible.

“What’s he doing?” asked Marc, as the man leered into the car. “Look at his eyes. I told you he was a freak.”

I had to admit, there was something feral about the eyes that peered above the black scarf.

“What’s wrong with his head?” asked Marc. “It looks all mashed up or is that just the light?”

“No, I think it is all mashed up,” I said. “Looks like he’s been dragged along a gravel path on his head. I think that may be his brains we can see.”

Marc looked uncomfortable. “Drive around him.”

“Drive over him then.”

The man was unravelling his scarf as if it were a bandage. He tugged it free. Marc screamed. It was a manly sound, but definitely a scream.

It was hideous. Putrid looking. Like a fruit that will turn liquid the second it is touched. It may have been the headlights distorting things, but it looked as if things were squirming amongst the destruction.

He sounded serious, so I managed to squeeze past the damaged man. It meant driving on the narrow grass verge, so that branches clawed at the side of the car.

“Call the police!” said Marc, staring at the man through the rear-view mirror – it was good to see him using it for something other than to admire himself.

“And tell them what? A man showed us his face and he was ugly?”

“He stood in the road, he was trying to stop us getting by.”

While Mark ranted on, I was thinking: Maybe it’s already time for the ‘oh dear I’ve run out of petrol’ routine. Fancy that Marc? Fancy making out while that creature comes staggering through the dark, dragging its left leg like a piece of dead meat?

Instead, I suggested we stop for a coffee at a small café at the next town we came to.

“Why do we have to stop here?” asked Marc, eyeing the dusty interior and sparse clientele with distaste.

“Doesn’t your brother have coffee?”

Marc screwed his face into a sour pout. He really was too old for pouting.

We were served by an old woman with a neck like a brown paper bag.

“This place is a shit hole,” said Marc, not bothering to keep his voice down.

“I thought you might want a break from the car after what happened,” I said.

Marc didn’t speak again. He drank his coffee in quick jerky motions, like an actor in a silent film, then walked back to the car.

“Great coffee,” he said, when I joined him. He’d left me to pay.

Fuck you! I thought and drove on.

The car felt smaller. Marc’s breathing was loud and irritating. I wanted to punch him. Hit that once-peachy face until it looked like a pomegranate.

I chose another narrow unlit road.

“Can’t we use the motorway?” asked Marc. “Why do we have to take the scenic route?

I kept my face passive, while thinking: I Can’t do the ‘’no petrol’ routine on a motorway, can I. Can’t have sex with you on the hard shoulder.

The man was there again, running towards the car, stooped like an ape, grotesque face exposed, carnivorous glare fixed on Marc.

Marc screamed loud and shrill. There was nothing masculine about this one.

I slammed on the brakes again, stopping just feet from the man. He slapped his hands on the bonnet and grinned at us. A gob of blood flopped from his mouth and hung from the remnants of his chin.

“Drive over him!” screamed Marc.

The man was walking around the car towards Marc’s side, still grinning, the blood hanging like a red string of snot.

“Shit!” Marc began winding his window back up, but the stranger’s hand was already reaching in, grabbing at his hair, black nails raking at his face.

“Drive for God’s sake!” He kept winding until the man’s spongy hand was trapped. The rotting face was pressed to the window, leering like a drunk – a drunk that has washed his face with a flannel full of razor blades and drenched in acid.

“Okay,” I said, and pulled away. The stranger yelped like a kicked dog and a ripping sound filled the car. Marc was screaming again. I really wanted to hit him now.

“I know him!” he finally spluttered. “I dated him!”

“Please tell me you don’t always go for the same type,” I said.

“He didn’t look like that then! I met him in the Oak too. His name is Marshall.”

“How do you know it’s him?” I asked, genuinely intrigued.

“I gave him this ring,” said Marc, and I saw that he was holding one of the man’s fingers – the ring finger apparently – that had been torn off when I pulled away.

“How do you know it’s the same ring?”

“Because it’s inscribed,” said Marc, peering at the silver band like a jeweller – a jeweller that’s had a recent shock.

“We had a row. I finished things and he drove off after drinking two bottles of wine at mine and wrapped his car round a lamppost. He was thrown through the windscreen and landed face-first on the road. I saw him in the hospital before he died. It was horrible. I couldn’t even look at him let alone talk to him.”

“Not very compassionate is it,” I said. “Still, you were more romantic with him than with me. Perhaps we should try spicing our love-life up a bit. Live out a few fantasies.”

I pulled the car over to the side of the road.

“What are you doing?” Marc glared at me.

I undid my seatbelt and leaned across, kissing Marc’s cheek. He flinched away and continued glaring at me. I kissed him on the lips, shifting across so that I could wrap an arms around his waist. I kissed more forcefully and his mouth opened, his hands gripped my hair and he returned the kiss.

“Who’s watching us?” asked Marc, and at that point he would have felt hot breath on the back of his neck and smelt the death on it. He would have heard the rattle in the back of the man’s throat, wet and bloody.

“Marc,” I said, nodding to his dead ex-boyfriend in the back seat. “I’d like you to meet my brother.”