Every night, the closet in Thomas’ bedroom would creek open and he could feel it watching him from the darkness. Sometimes he could see its eyes staring at him, glowing green like shiny emeralds in the black abyss of his room. He knew three things for sure. The first was that it appeared only at night-time when it was dark. The second was that it couldn’t leave the closet. The third was that, while he didn't know why it was there, sooner or later, it was going to get what it wanted... 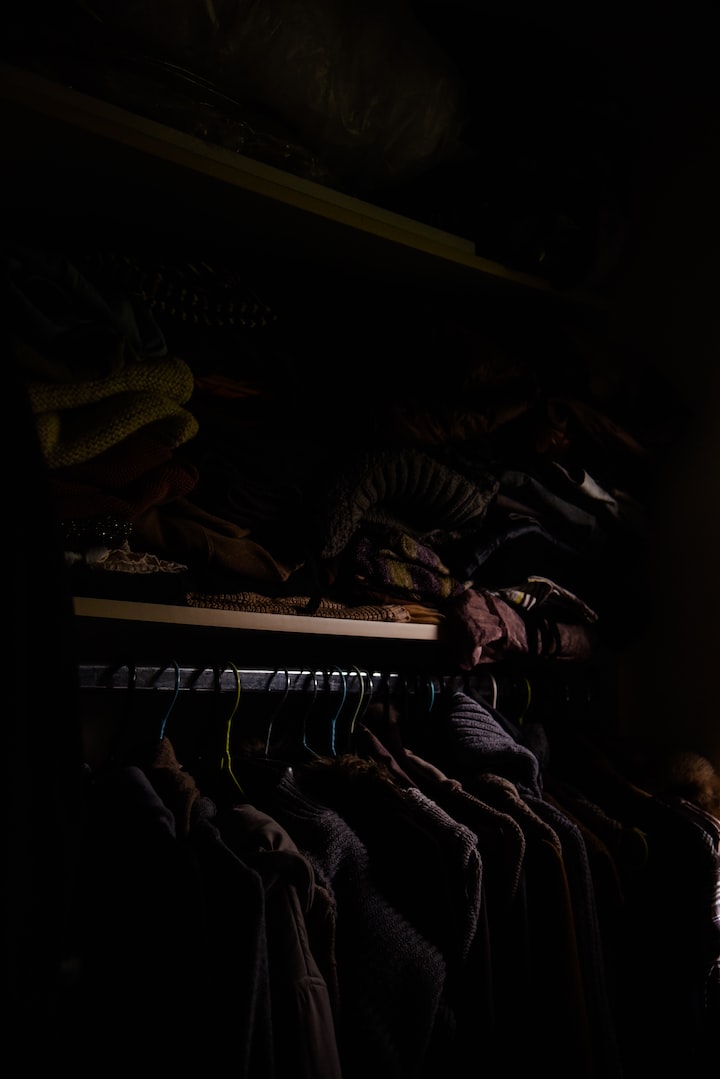 He needed to know what the fastest escape route was should the monster ever breach its confinement inside the closet. Four feet were all that stood between him and the thing that watched him every night.

Even without the closet monster, the room was ominous in itself. Thomas’ nightlight, which sat on his bedside table, illuminated the room, casting shadows on the walls like deformed puppets in a haunting show. It was void of all sound as well, except for the distant buzz of traffic and the gentle hum of streetlights outside the window.

Of course, he could turn the light off and extinguish the shadows, but the inevitable darkness which would follow was unquestionably far worse than tolerating the taunting silhouettes the light produced. Thomas huddled under his blanket, a much-needed respite from the threatening environment which surrounded him.

Nevertheless, he was well aware that a piece of fabric would be unlikely to save him from the dangers he cowered away from. An eerie silence emanated throughout the room, and he could tell it was there without moving, without even looking, he could sense its green glowing eyes.

Suddenly, the bedroom door swung open, causing Thomas to jump in fright. Janine walked in, dressed in her nightgown, and he let out a sigh of relief.

“You ready for bed, young man?” she asked in a jokingly stern voice.

Sensing his low mood, Janine softened up and took a seat on the side of his bed.

“What’s up?” she asked with a sigh, “Is it the monster again?”. Thomas looked up at his mother with an expression of shame. They’d had this conversation many times before. Janine didn’t believe him at all. Thomas knew it wasn’t her fault though. No sane mother would ever genuinely believe their seven-year-old child when they claim there’s a monster in their bedroom closet.

Janine nodded and smiled gently as her eyes stared off into the distance, thinking of what to say next.

“I know things have been tough for us lately.” Janine started, “But it’s going to be alright, we’ll get through it. I promise.”

She lifted her hand and began to stroke Thomas’ hair.

“I’ve got my job, you’ve got school. We’ve just got to keep going.”

“Me too, sweetheart…” she said in a tired voice, “But Daddy isn’t coming back… you know that, right?”

Looking for a desperate way to change the subject, Janine picked up a book from the bedside table, “Should we read some more of this before bed?” she asked.

“The part where the big bad wolf is wearing grandma’s clothes, I think.”

“Oh that’s right!” Janine said with forced enthusiasm as she flipped through the pages.

She started to read from the book, but Thomas had already zoned out. His gaze was fixed on the closet which had gently creaked open while he had been distracted by his mother. For a brief moment, it appeared empty inside, and then suddenly the green eyes appeared, glowing in the darkness.

He began to tremble as he stared in terror while Janine’s voice echoed senselessly around him as if she were speaking a foreign language from another room in the house. She was oblivious to what was unfolding in front of her.

“Thomas?” Janine suddenly interrupted, “What are you looking at?” she asked as she followed Thomas’ gaze towards the closet. The eyes had already disappeared, as they always did whenever his mother was looking.

Janine let out another sigh, “You’re worried about the closet monster, aren’t you?”

“Ok, well let’s close the door at least, maybe that will help.” She said as she stood up from the bed.

In a panic, Thomas looked up at his mother. She had no idea how dangerous approaching the closet was. He had to stop her.

“No! Please stay. Just for a few more minutes. I want to hear the end of the story.” He said desperately, grabbing Janine’s hand tightly so she couldn’t leave.

Janine turned back to Thomas, “So you want me to leave it open?” she asked in confusion.

“Ok…” Janine said in exhaustion, slightly annoyed as she took a seat on the bed once again.

“We were just getting up to the good part where the big bad wolf spits out grandma!” she said as she tried unsuccessfully to liven up the mood. She continued reading for a few more minutes while Thomas struggled to pay attention. He tried to avert his gaze from the closet and focus on something else, but it was difficult. He forced his eyes to wander around anxiously until they eventually settled on his mother’s birthmark, which peaked out from the edge of her gown at the base of her neck.

Suddenly, a crash emanated from the closet as something was knocked over. Thomas held his breath as Janine turned around.

“What was that?” she said curiously as she stood up from the bed. Thomas was speechless from terror. The monster was always so quiet, it had never made a sound before.

“No mommy, please don’t. It’ll get you.” He sobbed as he grabbed Janine’s hand yet again.

“Sweetheart calm down, it’s probably just a mouse.” She said as she pulled away from his hand and stepped closer to the closet. Thomas had never been so scared in his life, his heart was racing. As Janine reached the half-open door, a confused look fell over her face. She leaned forward to get a closer look and stepped inside, disappearing into the darkness. After a moment there was a loud grunt and another crash, as if there was a struggle, before the room fell silent.

His cries were met with nothing but silence. The room was deathly still, and the night-light flickered gently, causing ghostly shadows around the room to sway across the walls. Thomas pulled his blanket up over himself so only the top of his head was poking out in an attempt to comfort himself.

Suddenly Janine emerged from the closet with an estranged smile on her face, “It was just a mouse.” she said.

“See, there’s nothing to be afraid of.”

Thomas let out a sigh of relief as he looked up at his mother, and for a brief moment he felt at ease, as though everything would be alright.

But as she stepped closer, his heart sank. He held his breath as a cold chill ran down his spine.

“It’s time to go to sleep now, Thomas.” Janine said coldly as she reached the end of his bed. Her birthmark was gone, and so were the green eyes in the closet.

More stories from J. R. Lowe and writers in Horror and other communities.