Fish Man of the Flint River

by Al Treadwell 2 months ago in monster
Report Story 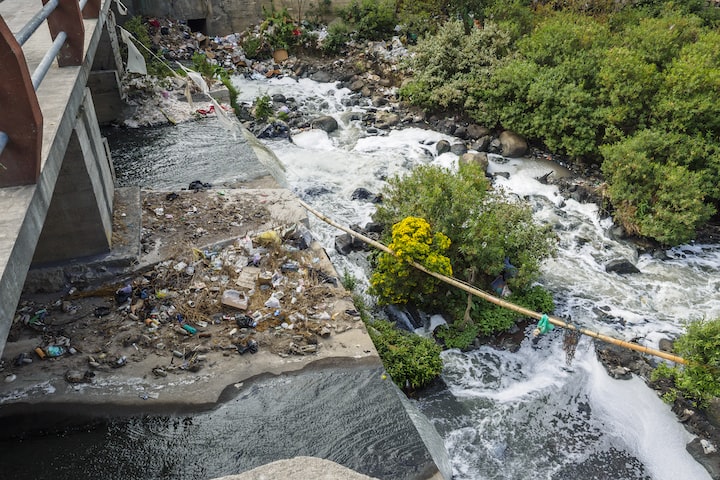 You’d better listen to me now—I’m going to speak as plainly as possible so you don’t misunderstand me. Because when you hear what I have to say, you’re never going to go near that water.

I was working down on the Flint riverbank getting prepped for tearing down the old Hamilton Dam. For those of you who don’t know the area, Flint’s located smack-dab in the middle of Michigan, which is surrounded on three sides by the same number of lakes. These lakes are all connected via the rivers and streams that run through the peninsula, like veins. I want you to think about that after I tell you what I saw.

The dam was originally put there for logging back in the 1920s when the city was just getting going. The river was called Biiwaanagooh-ziibi by the local Ojibwe, which we latecomers just translated. Now, I think we could call it Dumpster River, but we’re working on that. Anyways, the dam was declared a safety hazard, so that’s where I come in.

That day I was working alone as I was just posting the signage and trucking in some concrete barriers. Some state detectives were working just downriver; they were looking for the rest of this woman that was found a day or two prior. She was one of our local prostitutes and was set to testify against a police sergeant who worked for the city. He was being charged with trafficking heroin, along with some other felonies. That’s our boys in action, right there!

A local college kid spotted her naked body floating in the river—well, what was left of her. The killer (Mr. I-think-you-know-who) had hacked off her limbs and head from her torso, the latter being all that’s been found so far. So, now the state detectives were traipsing up and down the river looking for the rest of her.

They were a few hundred yards downstream when I decided it was time for my cigarette break. I sat my rear end right on the ledge of the dam and squinted my eyes downriver to see if they were making any progress. Hell, it’s not like I could hear anything over the crashing water.

Pall Mall hanging out of my mouth, I turned to light up when I saw It sitting on the river bank.

At first, I thought it might be a little naked child covered in mud, but I realized it was some sort of aquatic creature. The little demon—I guess you could call it a merman—was about the size of a four-year-old and had sickly brown skin, just like a dogfish. I saw it had legs instead of a tail, though they were still covered in large scales. He (not sure it was a he) almost seemed humanoid with his little face set with black, beady eyes. I wasn’t worried about his eyes, though. What I was worried about was the fact he was chewing on a human head.

I could only assume the head belonged to the prostitute they were looking for. I could see her hair was all matted from being in the water for a few days. He was really going for the whole hog; he had already eaten the nose off her face and was now working on one of the cheeks.

That thing was smacking on her head like he was at a family BBQ.

I wanted to yell at him to leave it alone, but before I could find my voice he looked up at me. He swallowed what he had in his mouth, and I kid you not, he smiled at me. It didn’t seem to be a malicious smile, either. It was more like a “Hey, guy! I’m just sitting here enjoying myself” type of smile. Chunks of gore jiggled on his two bottom fangs as he raised his arm in some sort of salutation.

At that point, I managed to put my senses together and got out of there. I found myself running in the direction of all those policemen, hollering my head off. One of them heard me and rushed to meet me halfway. By the time I got to him, I realized that what I was about to spew out of my mouth would have been foolish. I didn’t want to give them any reason to take me in—I’d rather go hang out with the freaky fish man.

I’m quick, though, so I told him that I saw what looked like that lady’s head in the water, back by the dam where I was working. He said it was OK and asked me to calm down. We both trudged back upriver, and I was struggling with telling a lie. I figured that little fish demon would’ve snuck off with the head before we got there.

We got to the dam, and I pointed the detective to the foot of the structure, right under where I was sitting. The water was rushing through with force that day and had created a good deal of foam. I didn’t feel like going to the water’s edge after what I had just been through, but I had to play my part so I peered into the frothy water.

Bobbing up and down in the tailwater were the remains of that poor hooker’s head—right where I said it was!

Al keeps a blog over at Medium, @stranger.cabbage. She earned a BA in English Literature, with a focus in gender studies. Her interests include feminism, off-beat history, and the occult.

More stories from Al Treadwell and writers in Horror and other communities.