by CAPNIFICENT about a month ago in monster
Report Story 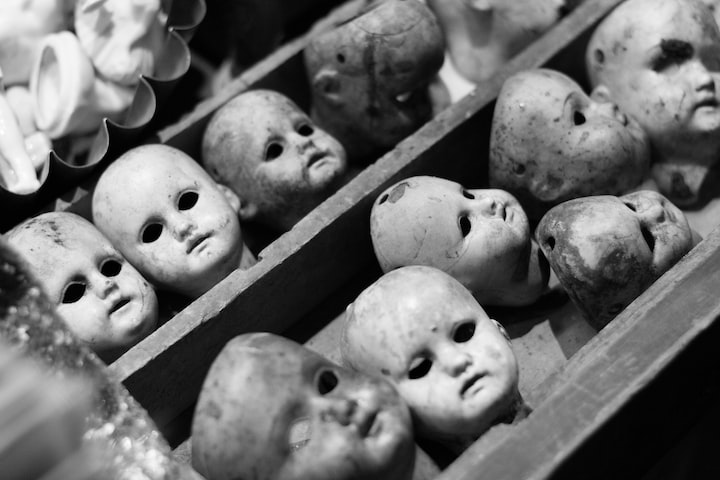 Photo by Jene Yeo on Unsplash

The cabin in the woods had been abandoned for years, but one night, a candle burned in the window. The startled hikers cautiously stepped beyond the threshold. The pitch-black room began to gradually illuminate. The mysterious candle sat on a small coffee table next to a wooden rectangular box with a glass face. One of the hikers stepped closer to investigate. "These are doll heads..." The hiker picked up the box. One of the other hikers exclaimed loudly. "Don't go picking up things in mysterious cabins. Especially a box of doll heads."

As the hikers investigated the rest of the rooms in the cabin, one of the hikers exclaimed in anger. "This definitely was not how I planned for us to do a retreat. We're literally stuck in the middle of a wilderness, in an abandoned cabin, in the middle of a thunderstorm. To top it off, our phones mysteriously drop to zero percent all while being stuck in a creepy dollhouse! This was a bad idea!" The lead hiker counted everyone. "Where's Heather?"

As Heather held the box, she looked closer at the doll heads. "Are these engravings on here? Wow, that's so cool. While she held the box, she didn't notice a small spider crawling out from one of its crevices. She looked at one doll head. On it was an engraving of a spider. " Oh no! I hate spiders! They're so - " The spider bit Heather's thumb. The excruciating pain caused her to drop the box. As the box fell and shattered to the floor, she screamed in pain as the doll heads rolled across the floor. Everyone came running to the entry room to see her crumpled on the floor. Suddenly, millions of little spiders began crawling out of her lifeless eyes and all over her, consuming her until, she was no more. They crawled back into the floorboards. The only thing left was a doll head with a spider engraved on its forehead. It suddenly began to crumble into a black powder. The candle was suddenly snuffed out. The thunder outside drowned out the screams of the scared hikers.

"We have to go! We can't stay here!" As the hiker ran outside, he kept running deeper into the pitch-black forest. The rain drenched his clothes as he heard his friends in the distance. He got tired and sat on a fallen log. He looked frantically around him "Oh no! What was I thinking? I got to get back to the group!" A flash of lightning illuminated the forest floor. He looked to his right and jumped up. A doll head was laying neatly on the log. he began to uncontrollably shake. On its forehead was an engraving of a cat. He backed up and tripped over a tree root. As he fell to the ground, he began to see many pairs of menacing red eyes staring at him in hunger. As the lighting flashed again, the forest floor revealed a huge litter of feral cats who charged at him. They began clawing and eating at his flesh. his screams for help were not heard. The doll head began to disintegrate into a pile of black ash.

The other hikers came back into the cabin . "This cabin is our safest bet right now. So far, we've lost Heather and Chris. We can't go running out on our own-" The lead hiker stopped and pointed to the center of the floor. "Okay... this is beyond weird..." In the middle of the floor, the rest of the fallen doll heads were mysteriously organized into a triangular shape. "There are exactly four of them just like there's four of us. I don't like the look of this at all. I think we may have angered some apparition." The lead hiker looked even closer at the doll heads. "I think it senses our deepest fears. I didn't know we all had the same fear of bees." They all stepped slowly away as the heard little thud against the windows. "Is that rain sounding like that?" They turned to the windows and looked in horror.

The swarms of bees began hitting up against the cabin windows, each thud producing a fissure in the glass. They screamed and fell to the ground in terror as the angry bees finally broke through the glass. As the bees began stinging and eating them, they looked over at doll heads that suddenly began to disintegrate into a black powder. After a while, the cabin was empty, and the candle flickered again. As it illuminated, next to it sat a new wooden box. In it were doll heads, all neatly arranged and staring aimlessly into the distance, ready to unveil more fear into the world.

Welcome to creative writing side. My name is Amman Jordan. My artist name is CAPNIFICENT. I love writing my own lyrics and I love to read intriguing books. I like read non-fiction mostly but I will definitely delve into fiction a few times.

More stories from CAPNIFICENT and writers in Horror and other communities.