by E.A. Wilcox 15 days ago in fiction

If You're Reading This I am Dead 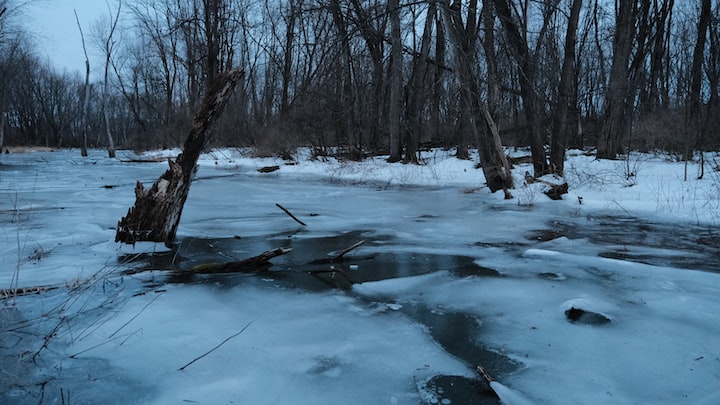 Photo by Aiden Craver on Unsplash

If you're reading this I am dead.

I died last week, though it feels like it has been an eternity already. It all started because Jesse told me not to drink the water. I suppose I should have listened to that wise old oak tree of a man, but I didn’t so here we are. You see even if I hadn’t done what I did then maybe I’d still be dead but, you know, on the inside of a living body. I'm just trying to see things in a positive light.

Jesse, Lillian (she hates when I call her that), or Lil, and I were taking a gander through the woods behind Lil’s house. They were the old creepy type of woods that are always in movies like The Blair Witch Project, The Ritual, and have you seen The Cabin in The Woods? I think you get the gist - they were some creepy woods.

The best bit of it all is Lillian lived in the same house that her family has lived in for decades past. She lives in that house if you know what I mean. There have always been rumors around town and especially at school about Lillian, her mom, and her sisters being witches.

You wouldn’t believe unless you got to know them that they’re actually the most down-to-earth normal people you’ve ever met. Lillian’s mom is a die-hard atheist, and there are zero talks about the supernatural in their house, you can send her on a real rant if you do talk about it. Lillian says that her great-grandmother was super religious but that’s all she knows about her.

The three of us walked through the woods as we were talking about the deep things in life like whether Jesse was going to finally ask May out or not. He had all these excuses like

“We’re graduating soon and we’re going to different universities. It wouldn't be a wise decision.”

Jesse, if you find this and you read this sometimes I wish you just be immature like the rest of us for once.

Suddenly, we heard the soft and gentle sound of a babbling brook - just like the white noise app I use for sleep and concentration except more real. I, being the ringleader of our cohort, decided to lead us in the direction of the sound.

Lillian expressed her disapproval of the venture but came along anyway. I’m pretty sure she just stayed because I was the one with the flask of vodka we were all passing around. We walked until we finally came to one of the most surreal scenes we had ever seen.

Before our very eyes was a clearing and in that clearing was an old house covered in snow, the trees around it were covered in snow, and next to it that calming babbling brook that we followed here. The brook spilled out into a lake that appeared to be frozen. Did I mention it was the end of August?

Then a hush from someone I couldn’t see made Lillian stop like she was a puppet.

“Lillian, my dearest Lillian.” The croaky voice said, “that’s no way to speak to your elders.” Reality started to hit me and my vision came back into focus, I guess I had gone into survival mode for a quick second. Before us was this old person dressed in the most hideous red velvet suit I had ever seen.

“Who are your friends Lillian?” The old person pointed their chin at me and Jesse.

“I’m Gregory, or you can call me Grey. Are you Lillian’s grand…”

“Shut up!” Lillian snapped at me. The oldie gave us a chilling smile that made me feel a bit sick to my stomach. I could feel the vodka crawling its way back up my throat.

Lillian shook her head “don’t take anything that is offered to you.” I honestly felt a little sad and left out of the loop on who this person was and why Lillian responded with so much drama.

“No thanks,” Jesse said flatly. He honestly seemed really unimpressed with the whole idea of this location in the woods, this person, and to be honest this crazy turn of events.

“I’ll have a drink!” I said politely. Again, the person smiled that gross smile - it made me immediately regret my decision. I was curious though so I went with it anyway.

“Grey!” Lillian was giving me that look that sent all the wrong you had ever done to the corner of the room to think about what they’ve done. I shrugged, curiosity was the mouse and I was the foolish cat.

The person pulled a cup seemingly out of nowhere and dipped it in the lake. As I took a closer look I saw some frozen corpses under some thin layers of ice. I don’t know how long they had been there. It kind of reminded me of that scene from The Two Towers when Frodo and what’s his face are walking over the marshes and they see the faces looking back at them.

I could have sworn that some of the corpses were still kind of moving and I’m sure one of them opened their eyes to look back at me. That’s not how I imagined the zombie apocalypse to start but stranger things have happened, right?

The red velvet suit person handed me the cup. “Drink up,” they said.

“Don’t drink that,” Jesse said with all his monotone might. Lillian started to laugh and the next thing I knew I was dead.

It’s been a week now since I’ve been dead. I don’t really know what to do with myself now. There are a lot of questions I still have about that day and about that person in the woods behind Lillian’s house.

Lillian, do you come from a family of witches? I’ve got so many questions so if you happen to read this from your cauldron or whatever it is you contact the dead through please let me know.

P.S. Give Jesse my flask will you? It should go to someone who will use it wisely.

Receive stories by E.A. Wilcox in your feed
E.A. Wilcox
Read next: The Tiny Light That Burned In The Dark