The March of the Penguins

by Paul Combs 2 months ago in literature 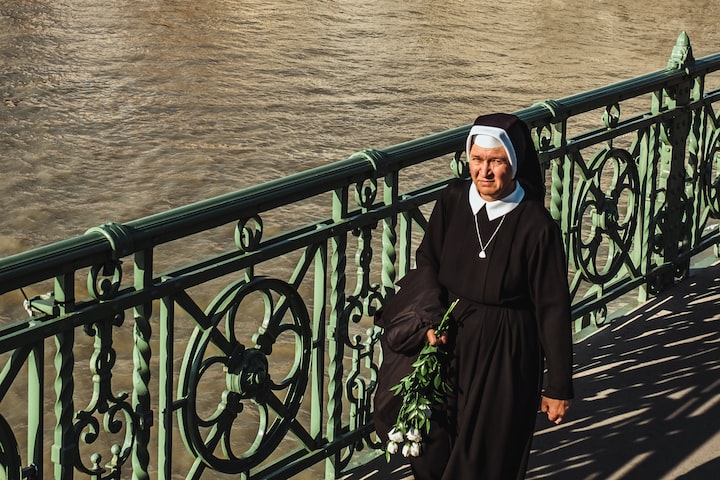 Photo by Maria Teneva on Unsplash

The Last Word Bookstore is busy on a late Tuesday afternoon. Jacob is deep in conversation with a man roughly his own age about the merits of Turgenev versus Chekov. Julia and Heather are ringing up customers’ purchases, and Camden is pleased to see that a small line has formed waiting to check out. Lines mean sales.

She walks over to a display of new releases Sal is organizing on a small table. Ever since he won their display contest, he has believed he is something of a marketing genius.

“I wouldn’t put that one here,” she says, pointing to a book he has placed toward the front of the table.

“And why not?” he asks. “Surely you’re not questioning the display king?”

“You did not just refer to yourself as the display king,” she says. “You won one contest — ”

“And was proclaimed ‘King of All Booksellers’.” He looks around. “Now where did I put my crown?”

“I wouldn’t be if I knew what the hell that was.” He continues arranging books.

“Again,” she says impatiently, “that book doesn’t fit there.”

He puts down the book he is holding, lets out a frustrated sigh, and looks hard at her.

“Why are you breaking my balls, cousin?” he asks. “Why doesn’t this particular book fit your expectations for our new release table?”

“Because it came out last year,” she says.

He looks at her as if she’s from another planet, or worse, England.

“Did not,” he repeats firmly. “It came in this morning’s shipment.”

“I ordered copies because the author died last week,” she explains. “Invariably people will ask for it now.”

“I didn’t hear anything about this guy dying,” Sal protests.

“It wasn’t a guy,” Camden says. “In this case, Michael Zonder was a woman. And you’ve never even heard of her, have you?”

Just then, a voice comes from behind them.

“You certainly will if you keep using that foul language, young man, especially in a public place.”

They turn to see a diminutive woman dressed from head to toe in a black and white habit: a nun.

“Good morning, sister,” Camden says. “I apologize for my cousin’s language; we were having a small disagreement.”

“That’s no reason to resort to gutter talk,” she says sternly. “I would expect that a gentleman who works with books would have a wider vocabulary.”

Camden simply nods, then looks at Sal and is shocked by what she sees. He has gone white as a sheet, and while she expected a sharp retort to the nun’s comment, Sal says nothing. She turns back to the nun.

“Can we help you find something, sister?” she asks.

“Yes,” she replies, drawing a list from a pocket in her habit. Camden never knew habits had pockets. “There are several Miss Marple books I have yet to read, and I would like to see if you have them in stock.”

“Ah,” Camden says. “My mum used to read Agatha Christie to me at bedtime.”

The sister smiles for the first time. She hands the list to Camden, who then passes it to Sal. He tries to step back, but she thrusts it into his hand.

“Sal will be happy to help you, sister,” she says, giving Sal a malicious grin. “And you let me know if he uses any more bad language.”

Sal’s shoulders slump in defeat. He leads the nun to the mystery section and waits patiently, and silently, while she makes her selections. When she is finished she starts to walk to the register, but Sal stops her. Camden moves closer to them, anticipating trouble.

“I will pay for your books myself, sister,” he says in a deferential tone Camden has never heard come from Sal’s mouth, “to make up for my offensive language earlier. I hope my behavior will not make you think less of my colleagues or our store, and that you will come back soon.”

To Camden’s further amazement, he gives the nun something of a bow as he says this. The nun smiles pleasantly, nods, and pats him on the shoulder. He flinches slightly when she touches him.

“Thank you very much, young man,” she says as he places the books in a bag and hands them to her. She nods quickly to Camden and strides purposefully to the front door. She stops before exiting and walks back to Sal, who tenses even more visibly.

“Are you by any chance a Catholic, young man?” the nun asks him bluntly.

“Yes, sister, I am.” His tone is almost apologetic.

“I see,” she says, her own tone once again disapproving. “Then be sure to tell the priest about your language when you go to confession this weekend. You do go to confession, correct?”

“Of course, sister,” he answers quickly while moving her toward the door again. “This week for sure.”

Satisfied with her accomplishments both commercial and spiritual, the nun leaves the shop without another word. Sal stands outside and watches her walk down the sidewalk, relaxing a little more as each step takes her farther away.

As they are closing the store that night, Camden brings up the encounter with the nun. Much to Sal’s annoyance, she recounts the entire episode for Julia, Ramon, and Jacob. To Sal’s further annoyance, they all laugh as she tells it, except Ramon, who glances at Sal with something that seems like understanding.

“Is our big, bad gangster afraid of a little nun?” Julia asks in a baby-talk voice.

“No,” he says, more sharply than he intended. “I am not afraid of a little nun.”

“I am,” says Ramon, “even more than I am of clowns. Uncle Luis says nuns are God’s storm troopers. He says twelve of them held off three Panzer Divisions that were attacking the Vatican during World War II. Very tough ladies.”

Everyone, including Sal, looks at him trying to decide if he is serious, at least about the Panzer Divisions.

“I know it sounds crazy, and you probably never heard about it,” he says. “But Uncle Luis was in Special Operations during his Army time, so he knows stuff regular people don’t.”

They all continue staring for a moment, then turn back to Sal.

“I get you being leery of them,” Jacob says. “I’m not Catholic, but even I know what a holy terror they were, at least back in my day. But I thought your generation came up under the kinder, gentler Church.”

“What does that even mean?” Camden asks.

“It means that the penguins at my school were not kind and gentle,” Sal says.

Julia bursts out laughing, though Sal was not smiling when he said it.

“Penguins?” she asks once she has stopped laughing. “Did you really just call the nuns penguins?”

“I damn sure did,” he says defensively. “Tell me she didn’t look like a penguin in that getup. A mean, angry little penguin.”

Now everyone is laughing, including Ramon, which only flusters Sal more.

“You Protestants just don’t get it,” Sal says. “No offense, Ramon.”

“None taken, sir. I have rejected all forms of religion to purely follow the revolution. But don’t tell my mother.”

“Then explain it to us,” Camden says, still laughing.

“Fine,” Sal says, “but I still don’t expect you to understand. It’s something you had to actually live through to comprehend, like a war or an asteroid wiping out all life on Earth. Anyway, to Jacob’s earlier comment, at my school the nuns were not ‘liberated’ as many became after Vatican II. They still wore the habit, which as I pointed out made them look like giant penguins.”

He pauses to let the laughter subside again.

“They still believed strongly that any child who made it through school with less than three permanent scars (physical, not mental…there were far more than three of those) had no chance of entering Heaven. I, for example, have several scars across my knuckles from a large metal ruler, one near my scalp from when my fifth-grade teacher flipped over a desk with me still sitting in it, and a broken nose from a punch thrown by my sixth-grade teacher. It was the same nun from fifth grade; she had moved up with us for some reason. To be fair, I guess I did punch her first.”

“You punched a nun?” Camden exclaims. “Why in the world would you do something like that?”

“The whole thing remains fuzzy in my memory,” Sal says. “I think it started with a comment I made about her beard. Anyway, with one slap she dropped me like a sack of flour. I hopped right up and punched her square on the jaw. Her head did not even move. I think the woman had been the Golden Gloves middleweight champ of Milwaukee in 1957. She must have hit me again because the next thing I remembered was being home with my mom lecturing me about laying my hands on the nuns, who were the brides of Christ, and how that would send me to Hell if I didn’t repent. I personally thought Christ’s bride would look more like Farrah Fawcett than Joe Frazier in a black dress, but Mom was insistent. So yeah, like Ramon I’m scared of penguins to this day…won’t even go near that part of the zoo.”

“That is the craziest story I’ve ever heard,” Julia says, clearly loving it. “So school was basically a nightmare for you.”

“Not all of it,” Sal says. “High school was better in almost every way.”

“How so?” Jacob asks. “Did you escape to public school?”

“No,” Sal says, “but my high school was run by the Salesians, an order of priests founded by St. Francis de Sales.”

“Most haven’t,” Sal says. “They don’t have the public relations skills of the Jesuits or the Franciscans. But they were as laid back as could be, unlike the Jesuits who taught some friends of mine at a school across town.”

“Yeah. While we were having masses with drums and electric guitars, they were chanting in Latin. While they wore suits and ties, we wore casual clothes, and even jeans if we were willing to pay three dollars a week; the money supposedly went to an orphanage in Gambia, so it was a win-win.”

“Not a penguin in sight for four glorious years. Also, while the Jesuit school was all boys, we had girls. My friends there may have graduated knowing how to perform 35 different types of torture — the Jesuits did bring us the Spanish Inquisition, after all — but we came out knowing how to unclasp a bra strap with one hand. Francis de Sales would have been proud.”

“The worst part of today,” Sal says, ignoring her, “is that now I have to go to confession this weekend. It’s been years; it will take hours.”

“You don’t have to go just because you told the nun you would,” Camden says. “She’ll never know.”

“The hell she won’t,” Sal says firmly. “She’ll know. She’ll come back here. And next time she might even bring friends. It’s just not worth the risk.”

Everything has been done for the end of the day, and Sal walks Julia to the front door.

“One thing is certain,” she says as he holds the door for her.

“Penguins or no penguins, you are a strange and interesting man.”

See all posts by Paul Combs →