by Katie Dawn about a year ago in humanity

things my boyfriend has taught me 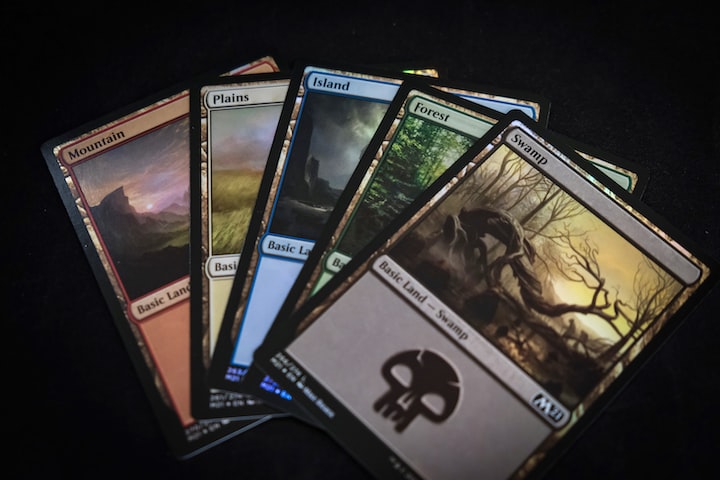 I met the love of my life through a dating app almost 2 years ago now. Whenever I would go on one of those apps or sites, I always read the profiles -- no proper profile = no chatting. I wanted a starting place, a thing I could talk about or ask questions about. Seeing his profile say "The dorkiest thing about me is I play MTG", well, I was excited!

I started playing Magic early 2014, and was able to play with my roommate for a year before we both got busy. Then I moved back to my hometown, where I had no one to play with.

So when I met my boyfriend ("J") in 2019, I hadn't been playing for 4 years ... BUT I knew enough about the game to still to start a conversation. (Side note: He has two younger brothers who also played, and they were quite shocked J found a GIRL who plays ... it does seem to be a uncommon thing; I've only met a couple ladies in town who play, as opposed to the dozens of guys.)

I had no idea I'd be talking to an expert though -- he's been playing for 20 YEARS! While I've only been playing again for a year and a half now, J has been able to teach me quite a bit about the world of Magic -- beyond all the rules I had to relearn from 2014!

Each set has its own flavour. I never really understood the strategy of the game when I first started getting into Magic; my roommate and I just played for fun. J showed me that each set has unique mechanics (although sometimes they bring in mechanics from older sets), and the cards really work together within the set. For example, the newest set at this time is Zendikar Rising, which has a focus area on having a full party -- cleric, rogue, warrior, and wizard (having one of each on the table means more bonuses). I never really picked up on patterns like that before when I played with Ravnica and Theros and Tarkir ... but looking back on my old cards now, I can see how the cards really do work together.

You can make your own commander decks. Having only ever purchased pre-made decks, it never even crossed my mind that you can MAKE YOUR OWN. (I know, it's so obvious to everyone reading this.) I won't go into too much more on this, but I just have to say, I LOVE how much creativity Magic brings out -- the ability to design your own deck, the way YOU want to play (whether that's strategic or just fun), is so amazing. I have so many ideas now that I've experienced playing against some of J's decks (which, by the way, are almost impossible to win against ...). It's my goal for 2021 to create 3 of my own commander decks.

There are Magic the Gathering books. I was BEYOND thrilled when I learned this! I am a reader, and I had no idea until last year that Magic had so much lore to it. (Maybe it was the year before, when I bought The Guildmasters Guide to Ravnica.) I think the individual worlds of MTG are so fascinating, and now that I know J has some of the Magic books (which I guess they used to sell with bundles or fat packs, and they no longer do), I am making it my mission to find the ones he DOESN'T have and add to his collection. I also really want to play an MTG-themed D&D game, if anyone knows a Dungeon Master who can make that happen ...

The community is INCREDIBLE. I've been to anime conventions before, and been part of online Young Adult book fandoms ... I have truly never met a nicer community than the Magic players in my town. (I hope this is true everywhere, but I know my local game store owner makes it his mission to have a welcoming, friendly, and safe environment for everyone who walks in.) Two months into our relationship, J brought me to the game store for Monday night draft -- I didn't play, just watched. One of the guys who worked at the store would show me his cards, ask me questions, and by the end encouraged me to try coming to one of the Monday night drafts to play. (My schedule didn't allow it again for several months, unfortunately ... but I did end up going for a few weeks in a row before the pandemic!) Six months into our relationship, I attended my very first pre-release event -- Throne of Eldraine! One of my opponents, after our two games, asked if he could give me some advice, which truly helped me against my next two opponents. In future events, I've even had opponents help me DURING our games (which I never expect; there are serious prizes to be won, and I would hate for them to help me and end up losing their chance to win!). Long story short, J tried to tell me how friendly the community is, but until I actually went a couple times, I didn't believe him ... now I can go into the game store by myself and the people KNOW MY NAME.

To be completely cheesy, Magic the Gathering -- in its creativity, lore, and fandom -- is truly MAGICAL!