How Wonder Woman Can Help You Live a Better Life

by Julia Valentina 5 months ago in superheroes

3 life lessons that the “Wonder Woman” movie teaches us.

At the weekend I rewatched Wonder Woman, and not only was I (again) surprised how good this movie is, but also what this movie teaches us. It’s so inspiring and interesting when you notice the little life lessons during a story.

So, my dear nerds, these three quotes will tell you now how Wonder Woman can help you live a better life.

“Never let your guard down. You expect a battle to be fair, but a battle will never be fair.” - Antiope

In the beginning of the movie we meet Antiope, the badass General of the Amazons. She’s the strongest and bravest warrior on Themyscira and also a wonderful mentor for Diana aka Wonder Woman.

During a training battle Antiope fights Diana and almost overwhelms her when she starts to fight “dirty”. And that’s also when she says this quote to Diana who is startled by the unfair moves her mentor makes to win the battle.

But what a life lesson!

That’s what real life is, right?

We expect everything and everyone to be fair but the reality is different. In reality unfair things happen to us. Sometimes these are things that can startle us or push us back. Maybe sometimes we fall really hard, really deep.

BUT the important thing is that we always stand up again and that we are aware of the unfairness in life. That we know that “a battle will never be fair”.

Thanks, Antiope, for not only mentoring Wonder Woman but also us. 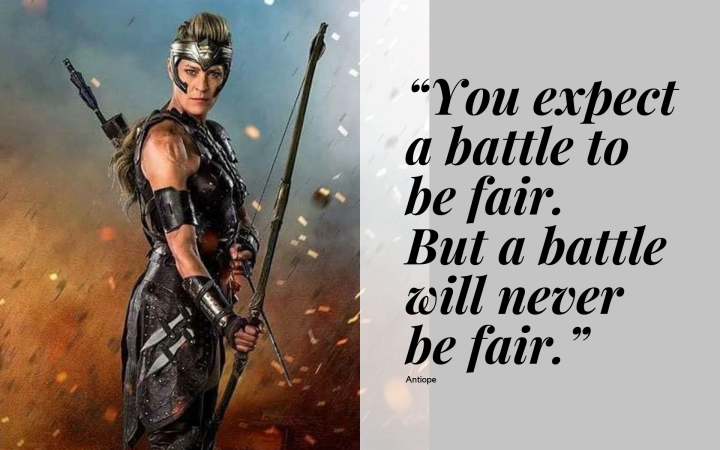 There is this sweet moment in the movie when Steve Trevor tries to hold Diana back from killing General Ludendorff, who she thinks is the God of War Ares. Diana gets really frustrated and angry about that. That’s when she tells him:

I LOVE THIS MOMENT! This is after the epic battle in “no man’s land” my favourite scene.

Because how often do we face these arguments when people try to convince us that we shouldn’t do something or that they think they know better what we want. This can be an argument between friends, co-workers, relatives, family or even lovers.

And I know as a “people pleaser” that this is a really hard. Because I don’t want to disappoint the other person or I don’t want to hurt their feelings. Maybe they know better? Maybe not? I mean, who knows!?

So when I am in one of these situations again, I try to remember Wonder Woman. Because to be honest everything we do is up to us.

We don’t owe anyone an apology and we shouldn’t need to ask for approval. It’s OUR life and we are responsible for every decision and every move.

People can give advice or tell us their experiences but what you do in the end, is all up to you. And only you. 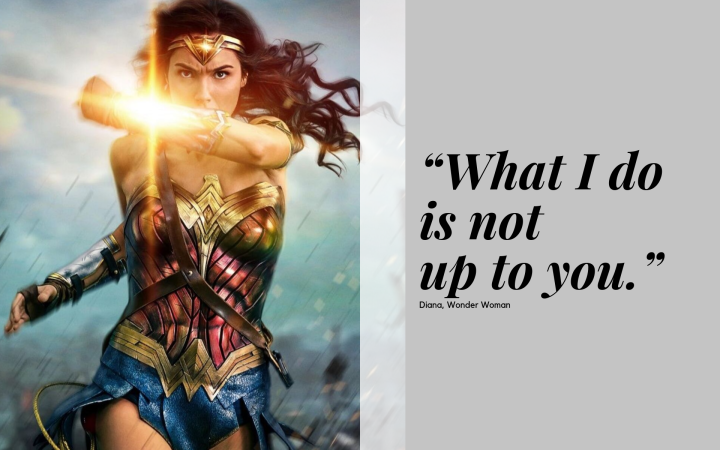 “When you see bad things in the world, you can either do nothing or something. Well, I tried nothing …” - Steve Trevor

When Diana rescues Steve, she asks him why he wants to go back to the war even though he hates it so. What Steve answers is so pure and authentic that it gave me goosebumps.

It’s his honesty that is so freaking sexy and intriguing. That’s a man who first looked away but then decided that this is wrong.

I mean, we’ve all been in situations where something bad happens and we did nothing. Me included. There are many reasons for doing nothing: fear, helplessness, shock, shyness, anxiety… etc.

But what if we were like Steve? What if even in moments of fear and terror we decide to be brave and to help?

What if we decide to do something instead of nothing?

I’d like to believe that the world would be a better place and that this would inspire other people to do the same. Maybe our braveness can change something?

We won’t know, if we don’t try. So, let’s stop trying nothing and do something. 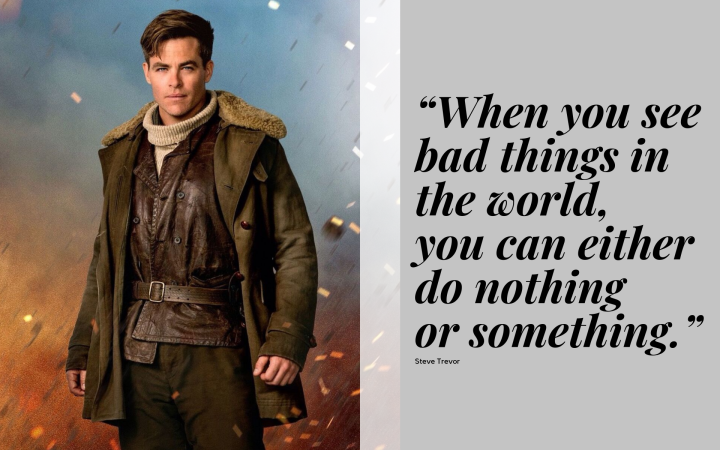 When I’m not hunting demons with Dean and Sam or looking for hidden treasures with Indiana Jones, I’m writing on stories and geeky, nerdy stuff and sometimes (ok, most of the time) I’m fangirling. But most of all I love to tell stories.

See all posts by Julia Valentina →