N
by Natalie 11 days ago in social media

Why we shouldn't let just anyone have a platform 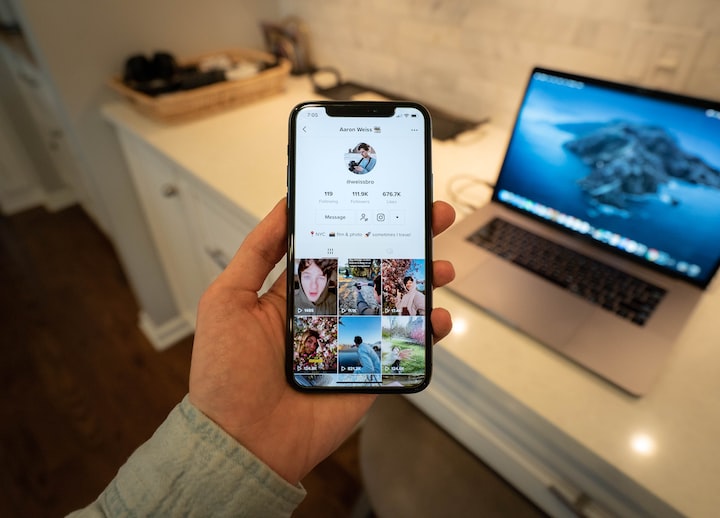 Photo by Aaron Weiss on Unsplash

If you spend a lot of time online, you've probably seen the new trend of influencers on the rise. Now, social media influencers have always been a thing. I remember when I was in middle school, there were a lot of influencers, mainly on Instagram and YouTube (and a little bit of Vine), that I looked up to and watched constantly. I remember sitting down after school, watching PewDiePie and Alisha Marie instead of finishing my math homework.

Although it was silly and my mom never understood the appeal of random adults making videos for kids online, it never really influenced the way I acted or my ability to think for myself. The most it did was influence my sense of humor.

Nowadays, kids base their personalities and political beliefs off of other teens on platforms like TikTok and Twitter. It doesn't matter what side you are on; There are accounts by all types of people with different political views and religious beliefs. If you were to peep into the comment sections of these platforms, you would see that a lot of those comments are made by children and teenagers. I've even seen some that look as young as ten years old.

So... what has changed to make these new-age influencers so influential?

First off, let's discuss how kids find these people in the first place.

I had a flip phone until sixth grade. Looking back now, I kind of miss it. It was nice to just be able to text and call people without constantly checking other social media apps.

But then in sixth grade, my mom bought me my first Apple product. I can't remember the exact model, but I could download social media on it. My mom was always super afraid of social media. She had read articles about child predators and pedophiles using things like Snapchat and Facebook to kidnap kids.

The worst part is that she wasn't wrong. That kind of stuff does happen to kids, probably more often than most people would expect. But being a preteen and feeling left out of every social conversation ever because I wasn't in the loop, I really did not care about that kind of stuff (I also did not really understand the actual threat of it either).

At first, I downloaded the apps and made secret accounts, praying I could delete them off my home screen before my mom would check my phone every so often. Then I started begging her to just let me have the accounts, that I would let her check my messages and explain to her how to use the apps so she would know of any loopholes. And it worked!

I started following a ton of random people I did not know, posting pictures of myself and my friends without setting my accounts to private, and most importantly (to this story at least), following big-time social media influencers. And as time grew on, my mom checked my phone activity less and less and less. It was up to me to control who I watched and how much time I spent watching them.

What's the point of me telling you my phone-addiction origin story? Well, this is how the influencers get kids in their grasps: lack of phone control on the parent's side and the inability of kids to control and think for themselves.

My mom did all her research and checked my phone constantly, but still, the influencers won. At least at the time they did. But now, most parents don't even understand how to use technology, despite the fact that most parents have the same devices their children do. Even if they do understand how to use it, they do not monitor their child's phones and what goes on when they're not there.

TLDR; If parents start doing their job and use the settings made for them (aka parental controls), maybe kids wouldn't be reached by influencers in the first place.

"Ok, I've set the parental controls and now my kid can't watch random people on YouTube. But really, how awful are these influencers anyway?"

I had these kinds of thoughts when this conversation first started. Are these people really that bad? The answer is... Yes. For the most part.

The idea of anyone broadcasting information and entertainment to whoever is already kind of a scary thought anyway. I mean, who knows if they fact-check their information or understand what they're talking about anyway?

Let me be real for a second here, though. I talk about the most random crap with my friends daily. Do I fact-check every single thing we discuss? No. Most of the time I forget about it.

So what's the difference? The difference is the audience size and age. My three almost-adult friends at my lunch table is a lot different than 1.5 million followers on TikTok, varying in age and background. When your public words and actions can influence that many people, you have to be careful about what you're talking about.

Let's take a few examples here, shall we? People like Shane Dawson and Trisha Paytas are still considered influencers online. If you don't know who these people are, do you even use Twitter? Seriously though, do some research if you don't know the background on them. Quite disturbing.

We also have more problematic, controversial people that are still considered influencers: James Charles, the Lopez brothers on TikTok, Nikita Dragun, the Kardashian/Jenner family. These are all people who have said/done extremely problematic, bordering on awful things for some of them, yet they're still closely followed by hundreds of thousands or millions depending on who you're looking at.

Most of these people are problematic for a good reason. Cancel culture may be rising, but it still isn't being used for the people that deserve to be truly canceled. If you don't know what cancel culture is, here's a basic rundown.

What I'm trying to say is that we cannot keep giving people platforms that don't deserve them. Be mindful of who you follow online and the messages they send out to the world. Just think: if this person popped up on my kid's social media feeds, would I want them to watch or see that person's content?

No? Then maybe rethink liking their videos or following their accounts. Once we start understanding how serious the problem of social media influencers is, we can start stripping these undeserving people of their platforms, and therefore their power over others.

Hi! I'm Natalie and I love to write and rant about topics I care about. If you have enjoyed this post or any of my previous ones, please consider liking them or even sending a tip! A little goes a long way :)

In case you're on the fence about sending money to someone you don't know and are wondering where it would go, here's where: college savings, gas money, groceries/food, a new desk and printer for schoolwork, and truck part repairs.

Any support is better than none! Thanks for reading and I hope you enjoyed it :)

Just a teen with a dream of travelling and writing for the rest of my life (but if I'm being realistic, maybe just a few trips a year as a journalism teacher :))

See all posts by Natalie →