by The Sessa 3 months ago in nintendo

Nintendo Games Based on Movies

It looks at me every day. My Game Boy. Oh, boy. If it only knew how I felt about shitty games, but it can never know. I made a choice to play these games. A life it's forced to be a part of. Who am I? I’m the guy given a game to play. And I’m The Sessa on Vocal; I too, have a game to review. 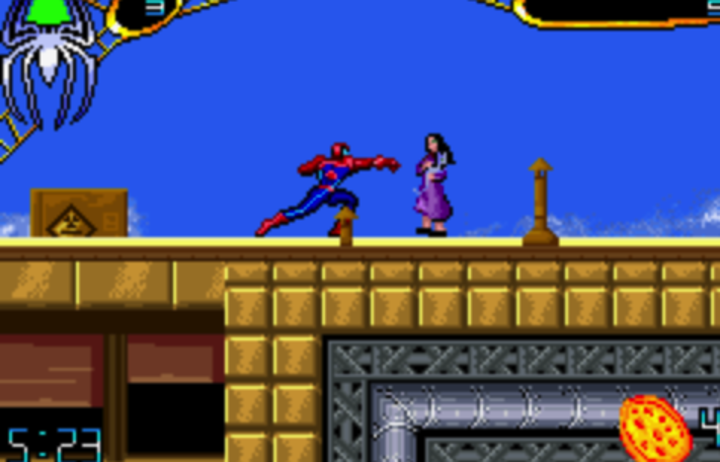 Before I talk about the bad, I feel like it’s my responsibility to discuss the good. The graphics, for the most part, are great. The story somewhat resembles the movie. The levels are unique and aren’t repetitive like the ones in Spider-Man for the Game Boy Advance. There’s a really cool upgrading system that makes playing the game efficiently worth it. That’s it, that’s the good.

A big issue I had with Spider-Man for the Game Boy Advance was the controls while web zipping diagonally. Spider-Man 2 plays almost identical to Spider-Man, with minor improvements. Thus, the web zipping is a lot better, but it’s also not very responsive at times. No matter what, you’ll always either take damage or die because of the web zip.

Web zipping wouldn’t be a big problem if they made you do it a few times, but in order to progress in most of the levels, you have to constantly web zip from platform to platform. Web zip after web zip with semi-decent controls will cost you a lot of lives, especially in the later levels. Out of all the things they would have incorporated from Spider-Man, why include the worst part of that game? 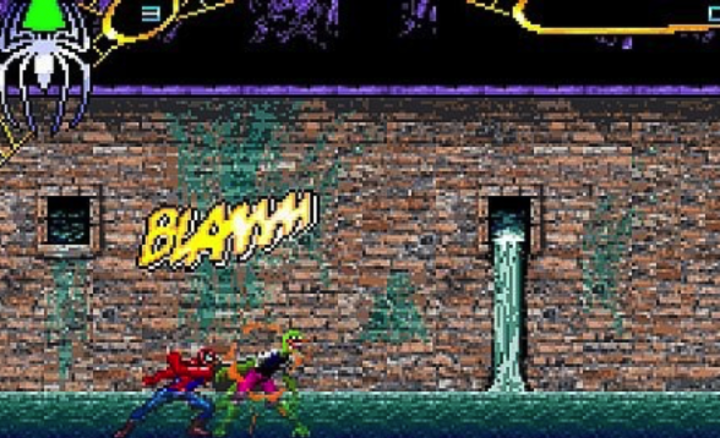 I praised Spider-Man for having great boss bottles, but Spider-Man 2 has the most boring boss battles I’ve ever played. You beat every single boss battle the same way. You wait a minute or two for the villain to tire himself out, you hit him once or twice with your fists or an inanimate object, then they hit the floor like a drunk girl passing out from alcohol poisoning.

You fight Rhino, Shocker, Mysterio, the Lizard, Puma, and Doctor Octopus. For starters, who the hell is Puma? I’ve never heard of this guy. In the context of the game, he’s basically a discount Kraven the Hunter, but why not just use Kraven the Hunter? He was already in the first game, just like Shocker was. You fight five of Spider-Man’s most iconic villains, and a weird looking lion motherfucker.

The most disappointing boss fight goes to the final battle against Doc Ock. All I did was stand next to him and punch him repeatedly. I spent less time on this boss than any other level of the game.

On the topic of enemies, the enemies are way too powerful in this game. The enemies that shoot are the worst and will always deplete your health bar. If you don’t upgrade your health and power, beating the enemies are almost virtually impossible in the later levels. They’re just random dudes with no powers, so Spider-Man shouldn’t have a problem subduing them. The bottom line is that Spider-Man is a bitch in this game. 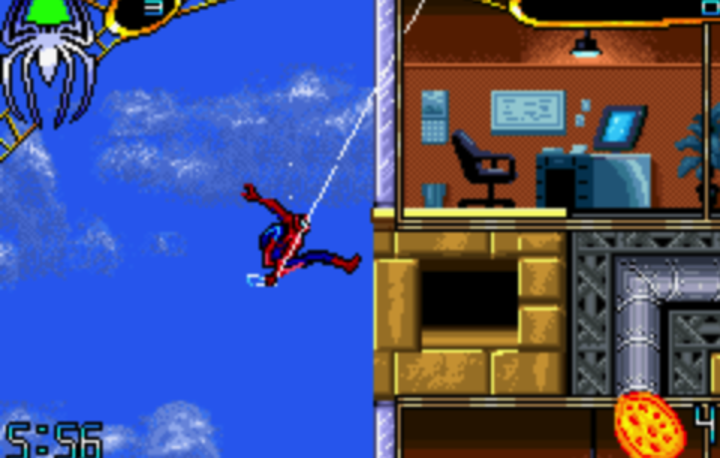 The swinging is somehow worse this time around. You can be swinging one second and in the next, Spider-Man is twirling through the air like a cracked out gymnast. Which is funny, because Spider-Man 2 for any other system influenced the swinging mechanics in later Spider-Man games.

It doesn’t just stop at swinging, but jumping from platform to platform eventually becomes an issue. In the later stages of the game, there’s these moving platforms that require you to land precisely on the middle or else you fall through the platform. This means you have to go through that portion of the stage again until you make it past those platforms. I was stuck on these sections for a long time. It felt like I was stuck in limbo and this game was my internal hell. 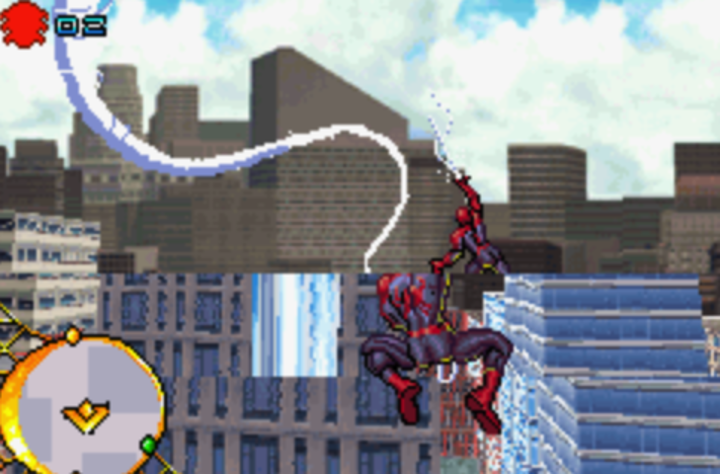 Spider-Man 2 also has a 3-D environment where you can free roam the map for side missions. It’s a unique aspect of the game… Unique in how shitty it is. For starters, the controls here take some time getting used to. It’s made worse because the navigation map isn’t that accurate. A mission will appear to the left of you, but moving straight can also sometimes get you there. It’s really weird.

Lastly, the swinging and animation is identical to the 3-D segments in Spider-Man. Therefore, it’s just as bad. The 3-D animation is just straining to look at. The granite floor is dull and the buildings seem flat and two dimensional. Swinging against a building just bugs the game out. Spider-Man moves in full speed and the wall constantly moves closer to you despite the fact that you’re already in front of it.

The worst stage of the game is when you have to chase Doc Ock through this 3-D map. It’s hard to keep up with him, the map isn’t accurately showing where he’s running, and the graphics are so bad, he practically blends into the grainy background. You also have to catch him which is just as impossible to do. I swear I ran into him by pure accident. 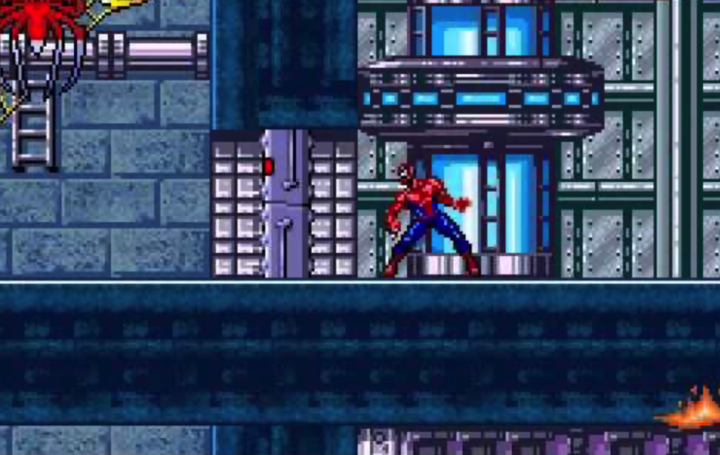 Spider-Man 2 is enjoyable enough, but these flaws are way too brutal to deal with. Playing this game is like being apart of a one sided group project. You have a really good presentation ready, but that one dude that didn’t put in any work just brings the grade down by saying nonsense. It’s a minor thing that fucks up the entire experience, just like how this game has minor inconveniences that makes me wonder if Uncle Ben died in vain. 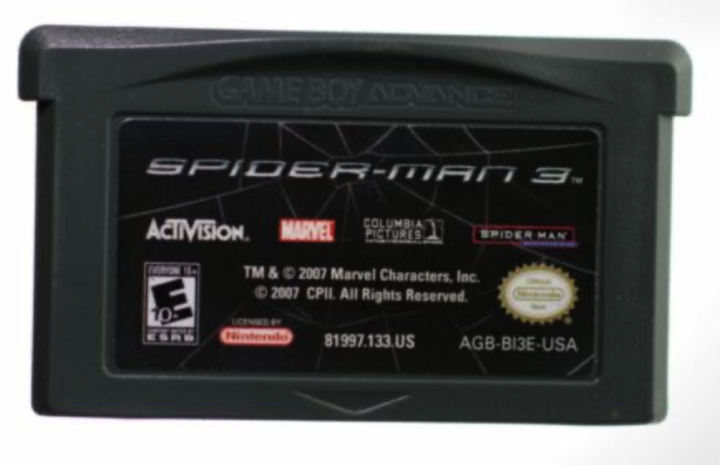 nintendo
The Sessa
Read next: Are Loot Boxes Gambling?
The Sessa