by TheGamersGhost 8 months ago in horror

Returning to the woods of Burkittsville, MD

Twenty years ago, a $60,000 movie exploded into a multi-million dollar success. Shaky cam filmmaking, a cast of virtual nobodies, a small town setting, and gritty realism helped sell the movie as a non-fiction account. For weeks after, people discussed the viability of the Blair Witch, some going so far as to spend a night in the ill-fated woods thought to be the resting place of the hapless documentarians: Heather Donahue, Michael C. Williams, and Joshua Leonard.

That the found-footage genre was still in its infancy certainly had a hand in driving the discussion over the movie’s realism. Directors Daniel Myrick and Eduardo Sanchez took a huge gamble by ditching traditional methods, instead favoring a handheld documentary style. The result was a movie said to have pioneered the found-footage genre while spawning a franchise of horrific delights.

The influence The Blair Witch Project had on the horror genre is still felt today. Hop onto Amazon Prime and you’ll find dozens of found-footage movies that emulate the shaky cam imagery of the independent production. The Blair Witch Project didn’t just infect the movie industry with love for unsteady camera operators. Its lore spread throughout multiple mediums, spawning books and comics that wove their own tales about the Blair Witch, Burkittsville, and the hermit that spurred the investigation into the vast woods of Maryland.

In October 2000, around the same time that the critically-panned sequel was released, Terminal Reality snuck out the first of a trilogy of PC games that melded supernatural action and survival horror with the mythology of the Blair Witch. It was an unexpected release, but one that did the source material well by building upon the story of Rustin Parr and making the Blair Witch lore accessible to an entirely new medium.

Blair Witch Volume I: Rustin Parr isn’t just a rehash of the movie, where players scour the woods helplessly in a modern setting. Instead, it takes us back to 1941 and introduces us to Elseph “Doc” Holiday, who some may recognize from Terminal Reality’s Nocturne (1999). That’s right, The Blair Witch Project wasn’t the only property Terminal Reality pulled from to bring the mysterious tale of Rustin Parr to life.

More than just a spin-off of the successful film, Blair Witch Volume I is an offshoot of Terminal Reality’s Nocturne. There are hints to the exploits of the episodic survival horror game scattered about, including a cameo from protagonist The Stranger and the secret government organization “Spookhouse.” Nocturne was very campy, but the early 20th-century setting, moody atmosphere, and unique scenarios were enough to overshadow wonky controls. Much of the same can be said about the Blair Witch video games, though the overall narratives are a bit more intriguing and the scares more abundant.

Much like how The Stranger is sent all over the world investigating claims of the supernatural, Doc is sent to the familiar town of Burkittsville, even sleepier than it was in the 1999 movie. Here, she becomes immersed in the horrors and psychological decay linked to the Blair Witch lore. Players investigate the small town, interacting with characters that have a Lovecraftian weirdness to them to unravel the truth behind the accusations against Parr, a hermit responsible for the disappearance of eight children.

The Monsters of Burkittsville 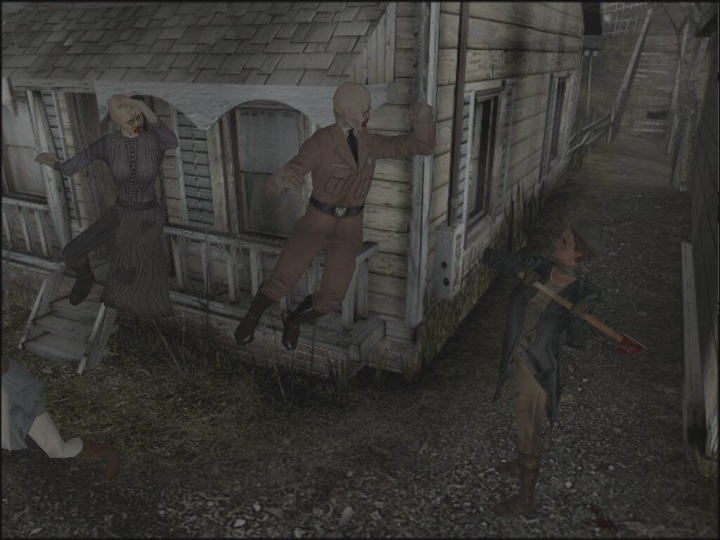 If you thought the 2016 Blair Witch movie was the first to introduce “monsters” to the mythology, Terminal Reality was ahead of the game by 16 years. Blair Witch Volume 1 could have topped out as a horror adventure title scattered with puzzles, but then it wouldn’t have been a tie-in to the more action-heavy Nocturne. So, despite her assumptions that the supernatural claims of the Blair Witch are false, the level-headed Doc arrives with an arsenal of weapons and paranormal-hunting gadgets fit for tracking and taking down the very real monstrosities that hide in the woods of Burkittsville.

1999 was ripe with releases that fleshed out more of the Blair Witch story, such as D. A. Stern’s The Blair Witch Project: A Dossier, which further attempted to legitimize the legend. A series of interviews, police reports, and newspaper articles—all created by Stern, of course—expanded upon the basic outline provided by the movie. Around the same time, a young adult series of books titled The Blair Witch Files released. While fascinating entries into an ever-growing library of material, the literary works didn’t do anything new that the movie hadn’t already touched on. That freshness didn’t come until Doc’s run-in with zombified townsfolk and shadow monsters in the winding woods of Burkittsville.

By weaving survival horror gaming into the world of The Blair Witch Project, Terminal Reality was able to deliver a game that recaptured the fear of being back in those haunting woods. Even through its shortcomings—which largely involved unforgiving camera angles, tank-like controls, and a ton of backtracking—Rustin Parr was an entertaining albeit slow-paced title for Blair Witch and general horror fans alike.

At least, it could have been had it not been lost to obscurity, forgotten by mainstream media. Though the game garnered some praise and landed on GameSpot’s “Best Adventure Game” award nominee list for 2000, it never reached the same status as other licensed video games. As soon as the Blair Witch craze died down, Volume I and subsequent releases were easy to forget. By October 2001, Blair Witch sold 49,000 copies, a fair amount for a 2000-era PC game, but its follow-ups wouldn’t be so lucky.

The ballad of Rustin Parr was only one of three parts and the only one to be developed by Terminal Reality. Within a month of Volume I releasing, Volume II: The Legend of Coffin Rock (Human Head Studios), and Volume III: The Elly Kedward Tale (Ritual Entertainment) launched. Despite being published by Gathering of Developers much like Volume I, their collective sales within the first year barely broke 24,000 copies in total.

It’s been 19 years since we investigated the woods of Burkittsville, witnessed the gruesome horrors of Coffin Rock, and finally uncovered the truth behind the Blair Witch, Elly Kedward. In that time, we’ve been treated to two divisive sequels, but no promise of another video game based in the universe created in 1999.

That changed at E3 2019 with the reveal of 2019’s latest Blair Witch Project, a first-person psychological horror game that returns players to the haunting woods of Maryland. Players will once again get to live out the horrors of The Blair Witch Project, hopefully in a manner that isn’t forgotten umpteen years later, relegated to scattered online auctions, sold by the few people that remember the experience of unraveling the terrifying tale of the Blair Witch.

Welcome to my slice of the world - Outpost 31LV. This is my outlet to be myself, where I rant about video games, rave about horror, and showcase the things that interest me most.

See all posts by TheGamersGhost →