by Lindsay Rae Brown 22 days ago in literature 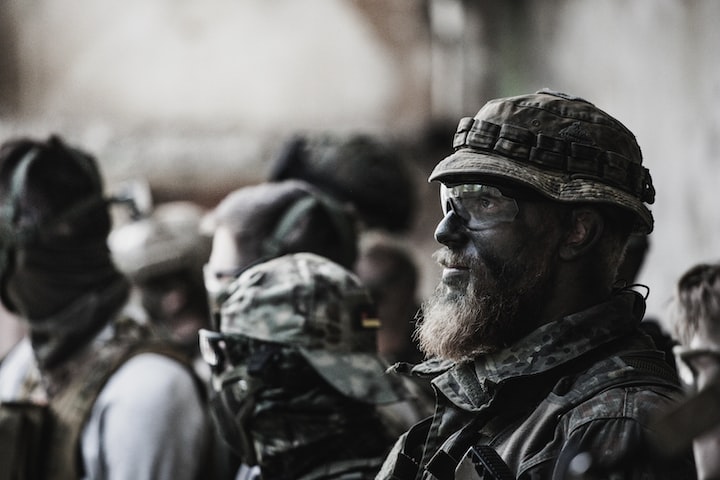 Photo by dx Stub on Unsplash

The watch, with the cracked face and broken minute hand, has finally stopped. Tock knows that some real shit is about to go down, and he's bowed out early. I don't blame him. The sound of boot heels overhead calls the tiny hairs on my body to stand at attention. The smell of acrid soil stuffs my nostrils as I recall the carefulness with which we moved down the cellar stairs. I know all too well what a sprained ankle might mean in the new world order. All the while, knowing my 13-year-old is still out there. Maybe he's already dead.

Jess picks our youngest off the dirt floor and buries the babe into the warm comfort of her breast. Systematically rocking back and forth, tick and tock. This kid could be the undoing of us all if she decides to pipe up while our visitors are afoot. The second eldest cries for her brother, but out of some instinctual sense of survival, she stops when hearing those heavily dressed feet begin to punch the floor above our heads.

The world is in upheaval, has been for almost a year now. I've been keeping track of each new devastation that hits. The hurricanes in America racing up the eastern coastline, sinking so many cities into the deep; tornadoes that have ripped apart Canada's mid-west; earthquakes that quivered all throughout North America like a bomb in continuous detonation—all scribbled down hastily in my little black book. My journal of all the horrific things I once thought could never be possible. The worst part about being a writer is that even as the world ends, you still feel that intangible need to mark the events down to paper.

Small towns are falling into the now cavernous sinkholes sprinkled all over this big blue bouncy ball. Actually, no, I shouldn't say that. Nobody knows what kind of hit our neighbours across the pond have taken. Overseas communications were cut-off months ago, which means there is still hope for rescue, maybe.

The Green Men are no longer a reliable source for information. Once when they were still military, the Green Men were synonymous with good men. There was hope. Ideas floated optimistically like colourful balloons at a child's birthday party. Except eventually, they began popping on impact with each tried and failed attempt to save our planet. So, the good men fell—some kind of radical mutiny. The Green Men, despite wearing those same khaki army duds, have all turned sour. Mouldy.

There are no hero's anymore, capes or otherwise. No revolting. No standing out from the crowd. These men in power are without commandment. They hold supremacy only because of their sheer brutality, pushing limits, pushing bodies without remorse.

In the urban areas, not yet destroyed by natural disasters, walls of fire rise from the lunatics who have been forsaken by their judgment day. Stepping outside of one's refuge could mean a run-in with the carcass of a nearly dead drug addict. Because you know, sooner or later, the crank will set you free. The expectation for any normalcy to resurface is grim to none.

We managed to get out by some miracle, but not before we made the dire mistakes that have landed us here, in this storm cellar silently awaiting our fate.

The money was just sitting there. Twenty grand tucked neatly into the glove compartment. I pinched the car that was seemingly abandoned in a Walmart parking lot in order to drive my family out of the city and up to Jess's Uncle's cabin in Northern Alberta. I figured we hit the jackpot. After all of this had died down, we'd at least have something to begin our rebuild. After the power went out and our electronic banking systems crashed like a plane going down, the thousands we had invested in RSP's and Bitcoin meant absolutely nothing. So, some cold hard cash was a welcome relief. Or, so we thought at the time.

The thing is, Armageddon didn't happen the way it did in all those long-ago films. The progression was too slow for anyone to see it coming. Our governments kept control right up until the break, telling us to stay positive. Keeping us calm with promises of military rescue, some miraculous antidote to the devastation Mother Nature was throwing at us. Most of us did stay calm until our homes were crumbling beneath our feet, and the politicians had no answers and retreated to their own underground bunkers.

Uncle Greg was dead when we arrived at the cabin, a fallen tree, in addition to what looked like a pack of wolves. But the tremors don't seem to be as angry out here. No fissures for the kids to fall into for miles. Although twisters still seem to be a regular occurrence, the five of us learned quickly how to get into the storm cellar and hunker down in record time.

It's a good place to make our stand. The cabin's cold storage room is filled with carrots, beets, and potatoes, which we've been living off of quite happily. We stashed the money in the cellar while telling ourselves it would be our insurance for happier days. Now the idea of happier days are long gone, and we have Green Men on top of us, looking to take back their stolen treasure.

I don't know how they traced us here; I don't even know how they knew we had the money. Maybe it was the car—some kind of tracking device that managed to stay operational even after the lights went out. The reality is, it doesn't really matter anymore. The only truth we need to focus on is that they know we took the money, and now they are here for retribution. They yell to us in a maniacally jovial manner.

"Come out, come out, wherever you are. Little piggies, we can smell you," they laugh in a singsong manner. Insanity drips from their tongues. They sound barely human at all.

Jasper, our eldest, was out on a scavenging trip when the Green Men arrived on the property. There was no time to look for him. It was too deadly quiet to call out and warn him. I can only hope he was smart enough to find a decent hiding place.

In the last twenty seconds, I've imagined every possible scenario in which I attack our aggressors. In each outcome, Jess and the girls rest unmoving on the ground in a lake of blood. The Green Men will have no mercy on any of us, even the little ones, if they find us cowering in this pit of hollowed-out earth. Best to lay low and try to ride this thing out.

A light that is biting attacks from above. It is sudden and not in the least surprising. My body jumps nonetheless—a knee-jerk reaction to the travesties that are about to occur.

"Whoa-ho! Look what we got here, boys. A whole clan of pioneers." The man's voice commands attention, and the grieving process kicks in immediately.

The Green Men coax us out of the cellar by pointing their guns at the smallest of our brood. Gracie, with her raspberry stained cheeks, Blacky-Bear, hanging limply from her hand.

"Please don't hurt us," I immediately begin to plead. Years ago, I'd never allowed this sort of patheticness to creep into my voice. Now, it seems to be my best bet. "Hear me out, hear me out," I continue. With my hands stretched in front of my face, I feel as though I might be able to catch the bullet meant for my left eyeball.

"Didn't your mama ever tell you, you shouldn't take what's not yours," The ringleader of the gang says. He looks over to Jess and the two girls, "I guess I'm going to have to take something of yours now to even the score."

Before I have time to beg for the lives of my girls, Brigit, our eight-year-old, screams, "Twister!" as we taught all the children to do when they see the warning signs of a coming storm. Her squat cry startles all of us, and the three Green Men look up in quick succession, giving me half a second to decide what comes next. The tornado, however, comes on with exceptional quickness. As though Mother Nature knows we need a helping hand right about now. The men clad in army attire—medals that they never earned, make way for the cellar. They no longer care about the money; all they want is safety from the gale-force winds which have shot down from an ever blackening sky.

I can't allow them to get to the shelter before us—this is the single thought racing through my brain. Funny how quickly priorities change in a hardened world. I wish I could say that I miraculously stood to the occasion and bested the men that posed such a threat to my family. But our imminent survival isn't my doing at all. Jasper enters from behind, wielding a scavenged handgun and maims all three men in quick succession. One—two—three, all of them are down. Jess and I move quickly to kick their firearms away from their writhing fingertips while Jasper, weeping, gathers the girls and guides them to the cellar door.

It is not a scene of sunshine and rubble that we crawl out of the next morning, but instead an overcast sky that dribbles raindrops like hard-earned urine during a kidney infection. The smell of wet wood and rust fills the air. The house is unsalvageable—the first utterly devastating storm we've seen since arriving. It's as though Mother Nature has taken her comeuppance for giving us a leg up back there. The three Green Men's bodies have vanished to the wreckage.

Providential intervention; it’s the only way I can describe our escape from death. There's no way we should have made it past the Green Men's guns. Jasper is the unluckiest of us all. Thirteen-years-old and now a lifetime ahead of him with three dead men's lives on his conscious.

It's time to move on from this place. Its relative comforts have been destroyed. There would be no use in expending the physical effort it would take to rebuild, especially if more Green Men will be stopping by for the same kind of pleasantries.

If this were a movie, our viewers would know that everything would be alright by how the sun peeked through the grey mist of rain. A daughter might take her mother's hand, while the boy stood tall and protective by their side—hope; that senseless, rash, balloon of ever popping emotions. But there is no sun today, and the kids do not move to hold our hands. We will travel on from this place, finding new shelter, trying to carve out some sort of life for our children. We will pack what little belongings we have and head north.

Of course, if this was one of those long-forgotten films, we wouldn't take the money. It would be left in the cellar, a token given back to the earth, symbolizing the new world's beginning. The player's recognizing the insignificance of those little green bills in an ecosphere that has shifted into something more raw and primal.

But, as I said, these things never quite happen the same way they do in the movies, so I take on the extra weight, pack the money, finish setting down the sentence in this tattered and worn notebook and look forward with hope that not all is lost of the civilization I once loved.