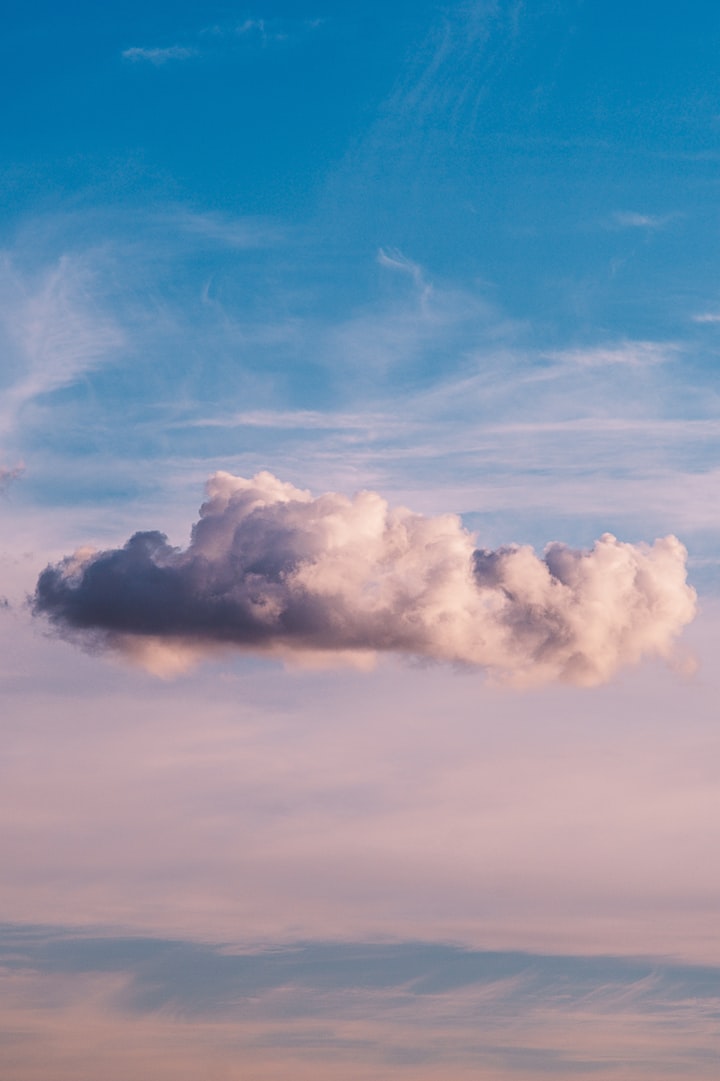 Photo by Wolf Zimmermann on Unsplash

About a girl who goes to a Dream Doctor to fix the nightmares that she has been receiving for the past weeks. Now when they goes back inside something else happen. What will it be? I hope you will enjoy it.

The waiting room - polished pristinely - so that Zanelle, sitting, eyed at the reflection of herself: hair gel back into a form of a bun; her outfit crisp and wrinkle-free, without a trace of other materials.

Her fingers slightly shivered like she was cold, but she wasn’t cold.

Zanelle heard the nurse's shoes click-clacking over until the lady stopped in front of her, blocking the light from the window.

The lady's mouth curved into a smile, “Dr. Goodman is expecting you,” the nurse signaled her pointer finger toward the dark hallway.

“Go to the hallway and follow the arrows and it will lead you to Dr. Goodman’s room,” extending her arm out, giving Zanelle permission to exit from her seat. She nodded to the nurse’s demand and proceeded to the hallway.

When she took a single step in the hallway, it instantly turned bright causing Zanelle’s body to jerk. She glanced at the door, where underneath it is a glowing blue light at the far end of the hall. An arrow appears from the side of the walls, blinking down, then another indicator throughout the hallway to the glowing door.

At the end of the hallway, by the door were an automatically female robotic statically voice appeared, “Please scan in your bar-code.” She held out her left arm, rolling up her long sleeves as she turned her whole arm upward toward the scanning machine, showing her non-permanent silver squared tattooed bar-code on her wrist. A red light sends down from the machine and quickly scans her bar-code beep, then the voice appears again.

“Hello, Zanelle Whiteheart. It is exquisite of you to take interest to fix the non-threatening worries that you have today. So, please come in, and Dr. Goodman will be with you in a moment.” It got silent then the door unlocked and sled wide open, where instantly a cool breeze came from the room.

She strolled in, and immediately the door closed and locked. Zanelle panoramic viewed the room: a dark medium-sized with a small light, a spotlight, upon a gold retainer chair placed in the center of the floor. The floor wasn’t glass; it was a different type of spread that Zanelle, herself, never saw in a day of her life, until today. Her eyes were hooked on the charismatic feature of this tapestry, being colorless along with soft, upon such desire to feel it. Zanelle slightly bent and stroked the unfamiliar material. She realized how smooth and fluffy against her fingertip; she found fondness within the soft material and wonder how it was fabricated.

The whole room instantly lightened. Zanelle rose up from the floor and saw Dr. Goodman, an average man with such an average characteristic face except for the scar on his lower right cheek; He was behind the desk, waiting patiently.

Dr. Goodman had no emotion whatsoever upon his face as he greeted Zanelle, “ Hello and welcome to the dream room. Please take a seat so we can get started”.

She took a seat and felt comfortable within her body from the retainer as she slowly sinks. Her eyes raised up to Dr. Goodman as he was walking over there, “How does this work exactly?”

“Don’t worry about it, you will be fine,” Dr. Goodman calmly said, “Relax.” Lowering the retainer chair more than it usually.

“Make sure your eyes are forward to the ceiling.”

Zanelle does what he commanded and eyes toward the ceiling while the sound of click clickety typing from the keyboard beside her right ear. Suddenly, she felt something cold placed on both sides of her head as an appearance of the hologram from the ceiling.

“So, from your recent scan from your bar-code. I went into your dream logs and saw that you have been having unpleasant dreams for the past couple of weeks. Am I right?”

The hologram changes into a picture of a brain that was color-coded, Dr. Goodman ambles over to the other side of Zanelle and pulls out silver metal sunglasses. He places it on her eyes, “this will help me detect and give me partial details of your dream to find the extract problem while you are sleeping.”

“How long will it take for me to fall asleep?”

Dr. Goodman grabs Zanelle left hand as extending her fingers where she felt something heavy and cold, a cup of water, “Drink this water then relax, close your eyes, and left your body to do the rest.” She took a grip of the cup and chugged the water then handled the glass back; Zanelle’s closed her eyes and didn’t move a single muscle.

After a few minutes, her body starts to doze off, and Zanelle’s brain took her to a dream

Where she was familiar with some, but as things escalate it becomes a place that even she hadn’t gone before: it started from a pitch-black area at first that converted into a sky, transitioned, like in a movie. Blood red clouds with the combination of orange and a bit of yellow known as the hellfire sky; rainfalls in the form of fire sprinkling down to the ground.

She remembered this part and only this part. Her dream transitioned again to black dust taking control of the air that’s circular upon people as they run, coughing, and screaming away from the opposite direction that Zanelle, herself, couldn’t tell from the dust being so dark in a direction that people coming toward her started bumming. Eventually; Zanelle lost balance and fell down and landed on her back. The people, running and screaming suddenly disappear from thin air.

She got off from the ground and saw that the black dust was still there and incoming something else, well, in this case, someone else. An adult figure walking through the black soil holding onto an object that was hanging down, Zanelle heart pounded while a chill went through her spine as the man continuously walked toward her.

Nothing but anxiety swirls around her, thinking if it is the man that all her mentors warns her about since grade school. The figure of a man came out of the black dust, where embarrassment seized her when she realized that it wasn’t a man, not even an adult, just a little girl in a filthy pink dress with her head tilted downward, holding a half-burned teddy bear as she was strolling. Until the girl bumps into Zanelle without a loss of balance or even lifts her head up to see who she bumped into; she took a step back and bent her knee toward the little girl.

“Are you ok?” Zanelle asked, hoping that the little girl could talk.

Nothing. Except for the little girl's head shaking in disagreement as something black came down from her pinkish dress: thick, black, possibly gooey substance that hangs for a while.

“Can you lift your head up?’ She asked once again.

The same response for a second time. Zanelle placed her hand upon the girl’s forehead; she was burning extremely hot, she thought, maybe it was from the hot air.

“See I there’s nothing to be sacred-“ Zanelle stopped herself and became quiet.

Her fingers shriveling as for her eyes watering; when discovering the little girl's face- her mouth on the sideburned right off seeing nothing- but her teeth and gums along with the same substance from before coming out within those equal sides.

The child's eyes were shut closed, dried up tears and black elements on the corner of the child's eyes. Zanelle became concerned, and the little girl’s arm started to twitch, her little fingers moved slowly as she put her hand down inside her pockets and pulled out a piece of paper, and held it up to Zanelle. Zanelle tried to make out the words but before, an invisible force of a hand occurred upon Zanelle’s right shoulder, a tight grip, as her body yanked away from the little girl.

Zanelle flew out of the retainer and stumbled down to the floor face down onto the tapestry. It calmed her down, slightly, she remembered the dream that caused her mind to open to a place; she never had happened before realized that those dreams were pieces. Piece by piece, working up to this very moment. Zanelle flipped to her back with such a confession, what does it mean, she thought. Even though thinking about what it could be was freight; Dr. Goodman walked to her and calmly bent down and offered his hand to help her up, she accepted and took his hand as her body lifted off onto her feet.

“Are you ok?” Dr. Goodman asked. However; his face had emotion, worriedness.

Dr. Goodman lowers his head at his tablet, he swipes up as another hologram appears with brief details from her dreadful dream, “According to the information you can see from here: Hellfire sky, black dust, and people running from their lives. It comes as a shock to someone else that this extract details as well. Then after that, it stops from that point.”

“Someone else? And it stopped?”

Dr. Goodman frowned, “Yeah. This is my second time seeing it.”

Zanelle wonders if she could ask Dr. Goodman who the person was, though it's prohibited.

“Do you remember anything else from the point it stopped?” he added.

Zanelle becomes unsure if she wanted to tell him, although; keeping secrets is breaking rule #1: I shall be honest at all times.

“Little girl? Was she wearing a dirty pink dress? Right?”

Zanelle's eyes widened, her mouth formed into a smile, “Yeah. Then she pulled out a -”

She stopped herself from finishing that sentence. She thought if she should tell him even though Zanelle didn’t see what was on the paper? It probably is unless without that part of telling him. I don’t want to waste his time with that.

“- a what?” Dr. Goodman said, looking concerned, “Tell me what you were going to say?”

Zanelle took a deep inhale then out, “It was nothing. I just remember that she pulled out nothing when I thought she was going to show me something.”

“Are you sure?” Dr. Goodman staring me down, “You’re not telling me any falsehood, right?”

Zanelle hesitates for a moment then says, “ I’m not telling any falsehood.”

Zanelle told a lie, not once but twice that she can’t take back now, I broke rules #1 & #2: I shall not say to any falsehood, or I shall pay the repercussions. She was though disappointed and ashamed toward herself.

Zanelle gave him a warm smile and turned her body and started to walk away.

“Wait!” Dr. Goodman shouted without warning and grabbed Zanelle before stepping out of the room, “Don’t move.”

Dr. Goodman pulled up Zanelle’s shirt as her bare back was exposed to the cool breeze, just then she heard a loud snap sound. Her blouse fell down.

“Did you have this before you came here?” Dr. Goodman said, in such a severe and terrifying tone.

“Have what before I-” Zanelle cut herself again as she turned around and became frozen in shock, confession, and fear of the image that shows her back of which was a massive spot of the black substance.

Zanelle confused than ever as she responded, “No.”