by A.N.G. Reynolds 11 days ago in science fiction 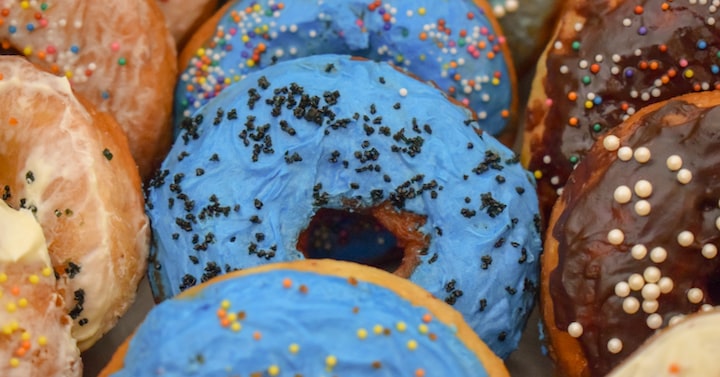 Photo by Jeanmal Wilson on Unsplash

His boots came to a defeated halt along the boulevard. He stared out into the distance, head slightly cocked, balding hair askew, and posture sagging. He looked – and felt – like a smoldering crater of a man: he was too far away from the intensity and excitement of the initial impact but still too hot and toxic to form a useful, plentiful lake.

A few women with shopping bags hanging off their arms passed by and whispered to each other about what his issue might be and why he looked the way he did. He turned toward them, contemplated giving them his entire life’s story but, alas, they picked up their pace and moved on before he could. It was just as well; they wouldn’t be interested in the life of a mid-level weigh station manager.

Unfortunately, he stood there a moment too long and a holographic advertisement popped out of the station’s metallic grey wall. A life-size woman dressed in silk appeared less than a foot from Torin’s face. She reclined on a champagne-colored plush couch, holing a bottle of perfume in her hands. She blinked thick, two-inch eyelashes that looked like caterpillars threatening to eat her violet eyes.

Torin blinked at the advertisement in apathy and confusion. The holograph did not acknowledge this awkward pause, clicking her long nails against the perfume bottle enticingly.

“I think you’re looking for a different type of customer, ma’am,” Torin said.

“The scent includes cool overtones and warm, spicy undertones for the perfect balance of professional and seductive,” the holograph continued. She seemed to be making little figure eights with her head and shoulders in an attempt to catch Torin’s attention.

“Respectfully, ma’am, that sounds like nonsense,” he said with growing exasperation. “Can you even see me? Do I look like I’m going for ‘seductive’?” He did a half-hearted twirl in front of her, holding his arms out. His thick, ill-fitting work clothes were practically draped over his thin arms and fat stomach.

The holograph didn’t respond with words, tapping the bottle more aggressively, as if the sound of someone’s fingernails drumming against the bottle was a suitable method of advertising the characteristics of perfume.

“Ma’am, if you don’t have anything more to say, I’m gonna leave,” Torin said with all of the politeness he could muster.

Torin ignored her. He stared beyond her shoulder at the dusty pink storefront, labelled with a sign that read The Cosmic Donut, featuring a stylized chocolate-glazed donut with a rocket engine on one side. Or perhaps, it was a rocketship that happened to be in the shape of a chocolate-glazed donut. Torin was not picky on how the sign should be interpreted properly. “I need a donut.”

“Excuse me,” he said with no apology in his voice as he stepped around the holograph. It took a concerted effort to get both of his feet moving again, but now he had motivation. The doors to the shop chimed cheerfully as he stepped in.

The inside was just as quaint and pink as the outside, with the heavy scent of yeast and sugar as an added tantalizing bonus. The store was roughly divided down the middle, with the left half almost completely possessed by the large “L” shaped counter, while the right half was dotted with small, decorative tables and chairs.

The counter’s long arm held four massive display cases, about a quarter filled with donuts and pastries of all kinds and colors. The short arm held the cash register and just enough cleared space to allow four barstools. Those were the seats that intuitively appealed to Torin and he selected the one closest to the register.

He glanced around at the rest of the shop as he settled into the seat, taking off his headset and placing it politely on the counter. The rickety barstool seemed to shudder under the weight of the mid-level weigh station manager’s girth and existential dread but carried on bravely.

“What can I get you?” the man behind the counter asked. He had materialized out of nowhere, wiping a spoon with a soft blue cloth. Torin startled, upsetting the delicate agreement he had come to with his chair.

As it refused to reach a compromise and began the process of unloading the unfortunate soul onto the floor, Torin had enough time to calculate the likelihood of landing on his cybernetic ear – which his insurance would not cover outside of work hours – as opposed to landing on something that was more easily fixed, like the rest of his skull. The outcome was not looking good, however, the event itself came to a halt before Torin made it to the ground.

He blinked in surprise. He looked up at the shop proprietor for answers, finding all of them. Apparently, the proprietor was both stronger and faster than he looked, as he currently held a fistful of Torin’s shirt to keep him steady.

“Would you mind sitting back up?” the proprietor asked with some urgency in his tone.

“Oh, right,” Torin replied. He put his feet back under him and stood up, catching the chair and setting it back to right. “Thank you.”

“It was my fault,” the proprietor said, shaking out his hand. He turned towards the other customer and called. “Pierce, make a note to replace the stools at the counter. Don’t let me get distracted.”

“On it, Mr. Han,” the only other soul in the shop said readily with a deep voice. This customer was dressed casually, occupying a chair and table that seemed far too small for him. He typed on his laptop with an agonizingly slow hunting-and-pecking technique, obsidian eyes locked onto the screen without a hint of focus or movement.

Much to Torin’s horror, the customer reached for a notepad and began to write in it. That wasn’t the horrific part, of course. The fact that the man’s right eye disengaged from its attention to the computer – and only his right eye – to observe what was being written on the notepad was the issue. It was as if the man had suddenly become part chameleon, or half of his body was entirely at the mercy of some foreign influence that had no sway over the other half.

Torin swallowed loudly as he watched the man’s two obsidian-colored eyes complete two entirely different tasks. He was about to lose his appetite when Pierce held up a thumb to indicate the note had been written. His right eye slowly moved back, returning to synchroneity with its twin.

“Back to what you want to eat,” the proprietor, Mr. Han, said impatiently.

“Oh, yes, right,” Torin said, choosing a different chair to sit in, dragging his headset to rest at his elbow. “Do you have a menu?”

Han jerked a thumb up at the holographic signs on the wall behind the counter. The bank of faded screens showed a complete bevy of options for both drinks and pastries. It also flickered and spasmed as if every second could be its last to report the day’s current specials, which were M’toh Coffee Crème [Medium Only] and Bitter-Blue Nebula Bites.

Han wandered back to the display cases, grabbing a piece of parchment paper on his way. Torin took the opportunity to observe the faded pastel mural that took up most of the shop’s rightmost wall, or at least pretended to observe it as he watched Pierce. Nothing else seemed strange about the man, at least.

“Thanks,” Torin said as Han handed him a singular donut bite. It sat in the beige parchment paper as a bright, almost shockingly blue planet dipped in clear icing. The color was slightly off-putting, but the mid-level weigh station manager had nothing left to lose at this point and popped the entire thing in his mouth, puckering instantly against the sourness.

Whether the bite was technically “bitter” or “sour” was a debate many scholars at the Greygante Remedial College had engaged in since Han introduced the flavor two years ago. The debates usually ended with the passing around of digestive aids and soothing, cold milk for sore mouths. Han clearly placed a warning label on the bites:

DO NOT CONSUME MORE THAN SEVEN [7] ‘BITTER-BLUE NEBULA BITES’ IN 26 HOURS.

This was largely ignored by the scholars, as most warning labels are.

Suffice it to say, the bite evoked a strong reaction from those who ate it, whether or not they were in camp “bitter” or camp “sour.” It also caused their mouths to turn bright blue, or purple, depending on the amount of swelling.

“I need more,” Torin exclaimed before he had even finished eating the bite. Han bobbed his head up and down in an unsurprised nod, getting a proper plate and placing six more near-fluorescent bites onto it. He set the plate in front of Torin and turned to make the coffee.

“This is so good,” the customer spoke with great reverence around a mouthful of donut. He was practically shoveling them into his mouth with more energy than anyone looking at him thought he possessed.

“Eat them more slowly—hey, hey, hey! Slowly.” Han set the coffee on the counter in front of Torin. “You’ll destroy your teeth enamel.”

“What’s in thesthe?” Torin asked, barely heeding Han’s instructions, developing a lisp from the sheer amount of donut in his mouth. He swallowed and reached for the coffee. “Pure ambrosia?”

“Some spices from Forty-One-Saints. It’s a secret recipe, I don’t think you would be interested,” Han said, edging Torin’s plate farther away from him as he was distracted by the coffee. He almost had it finished in three gulps, the thick, sweetness of the drink working to offset the donuts’ bitterness.

“Nah,” Torin said with bright, excited eyes, “I don’t want to run you out of business by making my own recipe.” His raucous laughter was cut off as he spied his errant plate and selected the last two bites to shove into his mouth at the same time.

“That is very generous of you,” Han replied in a flat tone.

“Ah,” Torin said as he licked his fingers to get the last of the icing off. “Those were dee-licious. My compliments to the creator.”

“You are flattering me,” Han said absently as he counted metal straws. He cursed softly under his breath as he realized he forgot to buy a replacement for the one he’d embedded in Laura Thacker’s leg. The emergency medical crew had removed it and given it back to Han, but he didn’t feel there was any level of sanitization it could undergo to be put back in rotation.

“No, I really mean it,” Torin said, leaning back as much as he dared in the barstool. “I feel like I’ve become a new person since eating those. I feel alive. Energized.”

“I had an overly confident spirit fall into the dough this morning,” Han mused.

Torin let out another obnoxious laugh, enjoying the joke. He slammed his hand onto the counter, leaving behind far, far too many credits to cover a medium coffee, set of donut bites, and a good tip.

“Have a good day, Mr. Han,” he said, picking up his headset and putting it back on his head as he stood up.

“I will, you too,” Han replied absently as he put the credits into the register.

See all posts by A.N.G. Reynolds →