by A.N.G. Reynolds 23 days ago in science fiction 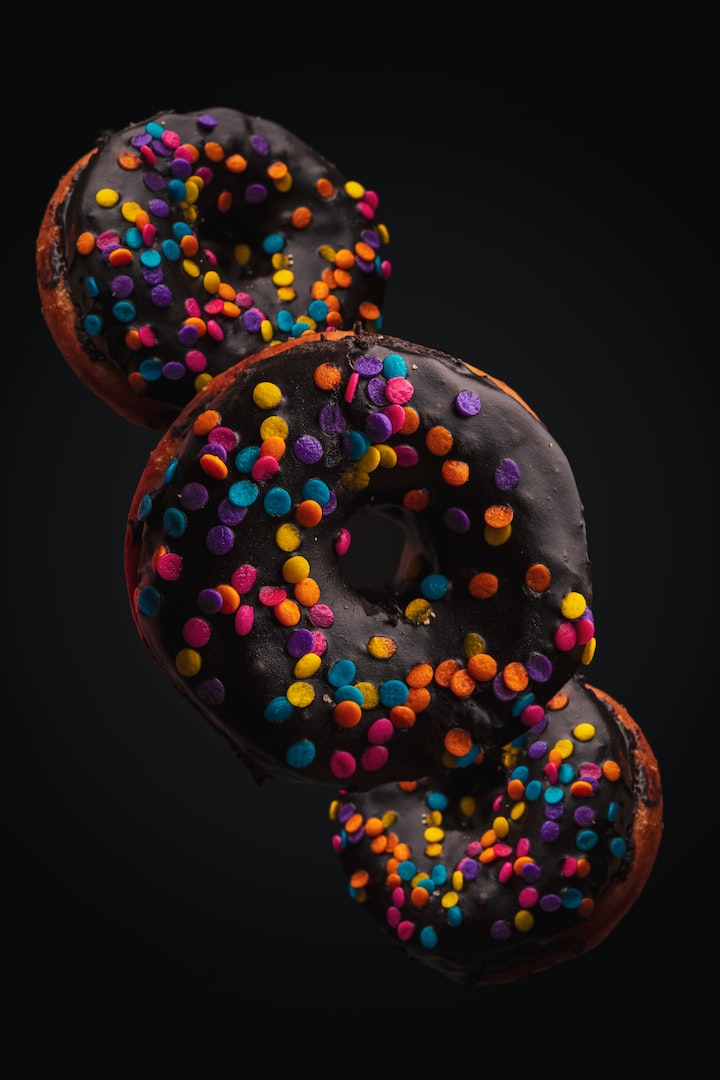 Photo by Pushpak Dsilva on Unsplash

“Hey,” Laura Thacker said, setting down her ice-water filled glass, looking to the proprietor behind the bar with a scowl. She pointed at the offending drink once she had his attention. “This straw has a bur on it.”

The proprietor, a thin man with the light bones of a spacer and sharp, almond-shaped eyes, looked at the aberrant straw. Then he looked back at Laura, shrugging with great indifference.

“I can’t see it,” he said, continuing to put cleaned glasses in the overhead cabinet.

Laura picked up the remorseless drink, marching over to the bar near the proprietor. Her stride was loud and filled with a lot of overconfidence. She slammed the glass down on the counter and pointed the metal straw again. Her delicate features twisted into a relatively convincing sneer; teeth threatening white against her warm brown skin.

“Look at it up close. I almost cut my tongue on it,” she said with emphasis.

The proprietor leaned forward, making a show of trying to find the bur. He made a lot of ‘hmms’ and ‘ahhs’ during this charade, even going so far as to retrieve his thick reading glasses from underneath the counter, wipe them off, and set them on the subcutaneous magnets that held them to the bridge of his nose. Laura began to tap her booted foot impatiently. He finally looked up at her, arching a brow.

“I don’t see it,” he said. He folded his glasses closed and tossed them back out of sight.

“It’s there. So, give me a new straw,” Laura said, sneer shifting to a tight, unfriendly smile. She glared at the proprietor though a loose strand of black hair that fell over her unnatural and unnerving left eye. “Next you’ll be telling me you won’t see the bur.”

“Why am I—ahh, this child! Apparently, she didn’t even read the sign and she is asking why I am like this,” the proprietor mumbled to himself, shaking his head and continuing to put away clean glasses.

Laura lifted her glass and swirled it around so that the straw rolled along the rim of the cup to get his attention. The proprietor ignored her. She cleared her throat loud enough to make the other patron in the shop turn in surprise. The proprietor continued to ignore her. She pounded on the counter with her gloved hand, making the glass displays rattle in their housings. The proprietor began whistling a catchy song by that M’toh pop idol, Marry Scarry.

After giving the proprietor another second to contemplate meeting her demands, she climbed on top of the counter and stood there, towering over the dusty pink bar. She tilted forward to keep her head out of the holographic display with today’s coffee specials.

“Hey!” she yelled. She held the glass out aggressively. “I’d like a new straw.”

“Fine, fine,” the proprietor said calmly, not acknowledging her utter disrespect of his business. “I will give you a new straw.”

Laura crossed her arms and frowned, watching him carefully as he did. He seemed to move at a glacial pace, carefully selecting and retrieving a suitable metal straw. She knelt down, holding out her glass to him as he approached.

“Ah, and it was your right leg that is fake, correct?” he asked, pausing before handing her the straw.

“It’s got bloody wires and tubes hanging off of it, yes, it’s the fake one,” Laura said.

“Good,” the proprietor said. He tossed the straw in the air, aiming to land perfectly upright in the glass. Laura tracked it with glee, her sharp, white DreamEye slowing down her brain processing speed to feed her information on its velocity and vector, predicting a perfect outcome.

Then it vanished. One moment her DreamEye was confident in its location and the next the straw was gone. She blinked, trying to reset the Eye and her own powers of observation. The only conclusion either she herself or the Eye could come to was that the straw had simply vanished from existence before hitting the glass.

If it had, the next part would have been much less painful for her.

The straw had not, in fact, vanished, but was repossessed by the proprietor in mid-air. In a motion so swift and smooth that not even Laura’s cybernetically-enhanced situational awareness could comprehend, he grabbed the straw and embedded it deep into the inside of her blue-green cybernetic calf. The wound spurted with glowing biomimetic fluid, as if bleeding.

That in itself didn’t cause her pain, this was not exactly a top-of-the-line leg, merely something she could afford and afford to break. This meant no pain receptors, merely audible warning sensors that would kick in once the onboard computer realized there was an issue. Presuming, of course, Laura had the warning sensors installed at all.

What caused pain was the proprietor’s next move. With the same quick motions he used to attack with the straw, he grabbed hold of Laura’s good leg – her human leg – and shoved it against her cybernetic calf. He yanked the glass out of her hands with one hand, placing the other against the kairidium chest plate Laura wore. He shoved against it just enough to aid her backwards momentum.

She was able to let out a surprised and pained shriek as she lost balance, legs now fastened together by the metal straw. She flailed her arms, trying to find something to slow or, preferably, stop her fall. There was nothing suitable and she crashed onto the ground below, narrowly missing a small, decorative table and chair.

The entire shop fell immediately and oppressively silent for a moment, Laura and the other patron too stunned to say anything and the proprietor not feeling the need to say anything at all. He calmly wiped down her glass before bringing out a spray bottle of disinfectant and spraying the bar where her dirty boot prints were.

Simultaneously, both Laura and her cybernetic leg began to cry out in pain.

“Ah, ah,” the proprietor looked down at her with judgement. “If you are going to walk all over my counter, did you not think there would be consequences?”

“You are going to jail, old man!” Laura cried, beginning to sob.

“No, I am going to stay here and sell donuts,” he said, gesturing to the display cases filled with sweet pastries of all kinds and flavors. “You, Laura Thacker, wanted in the Amn Democracy for murder, grand theft, illegal possession of a DreamEye, and wholesale movie piracy.”

Laura looked at him with horror as the store’s other patron stood up and calmly walked over to her. The large, intimidating man with thick folds around his neck and rich black skin looked down at her and shook his head slowly.

“Didn’t you read the sign?” he asked in a deep, soft voice. She gaped in confusion, so he walked over to the shop’s window, pulling down a small, handmade paper sign. He walked back over and held it out for her to see.

NO CRIMINALS PERMITTED IN THE COSMIC DONUT!

“He used to have a sign that read ‘you will get arrested’, but it kind of got ignored,” the man shrugged.

“Pierce, call the police for this—” the proprietor said, addressing the man. He waved a tired hand at the fallen criminal, trying to find something descriptive to call her.

“Yes. Rude disruption to my business. Thank you,” Han nodded appreciatively. Once the counter was cleaned, he walked back to the kitchen to retrieve a fresh batch of M’toh Maple Comet Crunch bars.

“No problem, Mr. Han,” Pierce said with a nod. He moved a chair closer to Laura as he pulled out his phone, sitting in it comfortably. He selected the contact ‘Greygante Station Police’ and the small, cartoon puppy connecting icon appeared. It wiggled and danced in an adorable fashion while he was on hold.

“H-how did he do that?” Laura asked, staring into the kitchen.

“Do what?” Pierce asked as he held the phone to his ear. He held up a hand for her to be silent as his call connected. “Yes? This is Pierce. I’m calling from The Cosmi—yes, Mr. Han’s place. Yes, he apprehended another ruffian. Laura Thacker. Yes, she’s immobile. Yes. Yes. Thank you.”

Pierce hung up, tucking his phone back into his pocket. He turned back to Laura.

“What was your question again?”

“How did that donut maker beat my DreamEye?” Laura demanded, adrenaline-riddled fear breaking away to anger.

“First rule of owning a DreamEye, Ms. Thacker,” Pierce said sagely, “is never letting anyone know that you have a DreamEye.”

“Does that little shrimp have a DreamEye? Is that how he beat me?” Laura shrieked, jabbing a finger at the kitchen.

“I don’t like shrimp,” Han called from the back. “Pick a different small animal, thank you.”

Suffice it to say, the police arrived and carted her away before she was given an answer. Once she was gone, Pierce took the sign back to the window.

“Take the sign down, Percy, I’ll remake it,” the proprietor said, shaking his head. “I’ll use stronger wording next time.”

Two days later, a new sign appeared in the window of the quaint and much-loved donut shop in the middle of bustling Greygante Weigh Station:

ABSOLUTELY NO CRIMINALS ALLOWED IN THE COSMIC DONUT!

See all posts by A.N.G. Reynolds →