by Rose Leffler about a year ago in science fiction

A traveler falls from the stars. 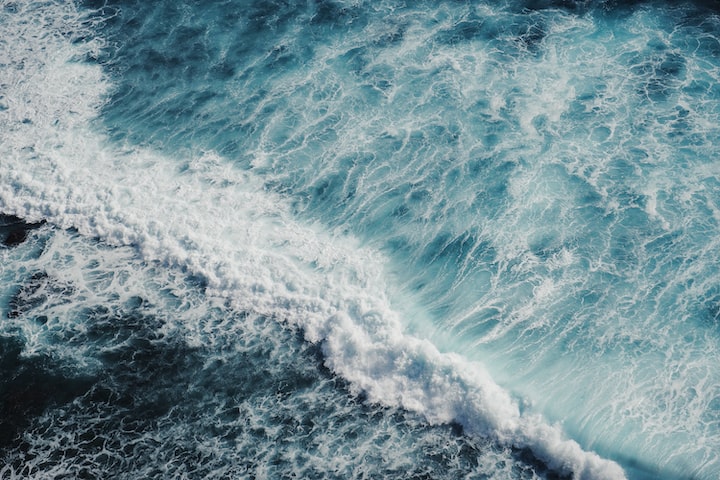 Photo by Andrzej Kryszpiniuk on Unsplash

Frigid water sinks its teeth into Shaltet’s fingers and lets light, white-hot against his face, through the static. Water. They must have made it. Survived, at least. But the alien sea is pouring in and the screens are black except for the error codes: engine failure. Stabilizer failure. Total instrument failure. Heatshield failure. Everything. Eirin is slumped against the cracked window in the next seat. Shaltet touches his copilot’s chest, waiting to feel it rise. When it does, he tips his head skyward to thank the powers that be. Wherever they are.

“Eirin. We have to go.” Shaltet takes his copilot by the shoulder, saltwater dripping into the rawness on his palms and down his sleeve. He recoils. Grits his teeth. Shakes off what he can. “Wake up. We have to go.”

Nothing. Water laps at the fuselage and Eirin’s head lolls against his shoulder, exposing a gash that starts at his temple. Shaltet can’t see where it ends. Hearts in his stomach, he unbuckles their restraints, puts on their life jackets, and then he’s alone on a raft at the mercy of an alien sea, his companion’s life bleeding into his hands. Shaltet tries for hours to stop the flow. Starts chest compressions when Eirin’s hearts no longer beat on their own. But it’s over. The gods must be far away. Chest aching, Shaltet nurses his hands in the cool ocean, eyes closed to the unbearable sunlight.

Everything is white when they open, like Shaltet knew it would be. Nothing worth seeing anyway, only water in every direction. But when the white has faded and the sky and horizon are separate again, something is stuck between them. A few minutes later, it sprouts a sail. Shaltet doesn’t pick up the oars to meet the ship—everyone else in the parsec wants him dead.

The sun has sunk behind the cumulus clouds on the horizon and the wind pulls at Shaltet’s hair when they come. In the softness of twilight, people with skin like quartz and eyes of obsidian appear on the sailboat’s deck, staring and murmuring amongst each other. Too tired to fight, he shows them his empty palms. “Our god!” one cries in Shaltet’s tongue, and they sink to their knees. “Our god has returned!”

God? Shaltet turns his blistered palms over. He burns like any man and their sun blinds him. How can they think him a god? “Why do you speak my language?” No one answers. Shaltet frowns. “Don’t bow to me. I’m no god.”

“‘One with eyes and skin the color of the sky shall fall from her arms, a glorious and benevolent sovereign,’” says the first one to stand, a woman dressed in blood indigo and red. “Our ancestors foresaw your return one hundred cycles ago. We studied your word every moment since.”

“I’m—” Shaltet shakes his head. “I’m neither of those things. I’m just lost.”

“You’ve been away for a long time, Sovereign. Come home.”

Guided by firelight and strange hands, Shaltet carries Eirin out of the water alone. More strangers run to meet him on the beach, some shedding tears for their dead god, others kissing the living god’s cheek. They accumulate until the mass is too viscous to part and its many hands eclipse the foreign stars. Trapped, still clinging to Eirin, Shaltet collapses in the shallow sea. More hands tear the body from his grasp, no matter how he pleads, then two more settle on either side of his face and he’s forced to listen to the voices. “Sovereign.” A pair of black eyes meet his. The woman from the ship. “They’re only preparing for the funeral. They won’t harm him.”

“They don’t know how.” A swell crashes over their shoulders. Shaltet breaks. She wipes his tears, then wards off the others, one protective hand on his shoulder. Voices still cry out for his eye, for a glimpse of a god, but she takes him under her arm. Shields his face from the storm. Almost carries him up the beach.

Muscles rippling beneath shimmering skin, more women in indigo and red meet them at the crest of the hill, where feathered steeds wait. One turns to look at Shaltet over its broken-glass beak, stopping him short. “My God,” says the woman, crouching at his feet. “We have to go. They’ll never let you leave.”

Shaltet glances over his shoulder, where a mass of torchlight creeps like lava in their direction. Touches the white patch on the animal’s chest. Softer than cotton. It lowers its head to get a better look at him, but doesn’t protest. “Okay,” he tells the stranger. She climbs up first and offers Shaltet her hand. When she lifts him into the saddle behind her like she would a feather from the grass, Shaltet counts his blessings she didn’t choose to snap his neck.

As the creatures make their way up the ridge, the palms give way to a great city nestled in the belly of a crater. Fires burn on every street. A lake on its distant edge reflects the last light of day. And the Mark of Altair glows blue in the city’s heart—a message to the gods. Shaltet touches the mark on his own chest, the same mark in every classroom, restaurant, and starport on his planet. Strange to find it so far from home.

“I’ve never seen the city so bright. Everyone is throwing a party for your homecoming. Some might even be allowed to go past curfew,” the woman says, smiling at him over her shoulder. “You’ll forgive me for my doubts. No matter how fleeting they were.”

“They aren’t mine to forgive.” Shaltet looks for Altair in the first stars. Must be washed out by the city light. “I’m only a man.”

“You’re testing me,” she says. Insects sing in the long grass beside the path. “I don’t know that I have the answers, Sovereign. Not yet.”

“Just tell me your name.”

“Mastin. But you knew that, didn’t you?”

A palace on the crest of a hill. His palace, the city on one side, the black sea on the other. People—servants—kneel when they see him, and telling them to stand does little good. If they’re not on their knees they’re asking to touch his face or hands or pleading for their loved ones’ souls. Shaltet tells them he can’t save them. They wonder why. No answer satisfies.

Mastin finds him outside, head in his hands, warm but numb in the robes left on the bed. Touching his shoulder to signal her presence, she settles down beside him. “What can I do for you, Sovereign?”

“I have a name,” he sighs, lifting his head to the clean uniform in Mastin’s lap. “It’s written right there. Enzel Shaltet.”

She smiles. “Of course you have a name. I don’t know why I thought a god wouldn’t have a name.”

Mastin nods and hands him the uniform. Too tired for sleep, he searches the sky for the missing star.

Eirin lies on a bed of flowers, half smiling, uniform scrubbed of impurity, eyes closed. Eyes closed. Shaltet turns to the waiting procession. “His eyes should be open. This is the old way.”

“Forgive us, Sovereign. We did not mean to offend,” says the minister, kneeling, head bowed. Like she’s about to be executed.

“I’m not angry.” He touches Eirin’s face, more peaceful now than it ever was in life. “They’re only open when we die away from home. If we can’t be there, at least we can see it.”

“Minister, look at me.” She lifts her head, but doesn’t stand. “Thank you.” Her jaw unclenches. “This is more than I could have asked for.”

After the service, strangers swarm Shaltet again. Mastin, who hasn’t left his side in three days, does her best to keep them at bay. But Shaltet is the first to give in—blessing the masses proves easier than convincing them he can’t. People with missing limbs, missing eyes, poisoned children near death in their parents’ arms. Here, their brown eyes are grounds for damnation. At home, they’re the reason he fell in love. Hundreds touch his face, fall at his feet, kiss his hands. He stays until he can’t stand, can’t protest when Mastin carries him to a quieter place.

Two statues, built amongst the rippling grass, look skyward. One shields his face from the sun, searching. Their features are familiar from a distant memory. More questions. “Who are they?” Shaltet asks from his place in the soft earth.

“The first gods. Don’t you know them?”

“Somehow. No, I do know them. They went missing during the Golden Age.” He gets up to read the inscription at their feet: MAY THE GODS, IN THEIR INFINITE COMPASSION, FORGIVE OUR ULTIMATE SIN. “What happened to them? What was the ultimate sin?”

She sighs. “They were murdered, Sovereign. Some hated the change they represented. We’ve done our best to repent.”

“And with whom are your people at war?”

Days come and go, then weeks, then months. Shaltet blesses too many to count, prays to his own gods in the little time he has. Prays for them. For the end of the war. He can’t find Altair in the night sky and can’t find sleep on the broken planet. The sea tempts him like it never did before.

Another morning, another audience in a gilded chair far bigger than he is. No one is turned away, not even the men with blood on their hands. Shaltet hates King Aestith more than anyone. Today he brings his god a girl, a living bribe dressed in gold. Gold buys cooperation from some. Silence from others. The blind eye’s currency for those not omniscient.

“For my sins,” says the king. Concealed by the divine silks Shaltet wears over his uniform, his fingers coil around his sidearm. Maybe it isn’t his place.

“Lying is a sin. Stealing is a sin,” replies the god. “You commit atrocities.”

“I am repentant, Sovereign. I regret what I do, but it’s necessary.” He pushes the girl toward the throne. “This is my penitence.”

“She’s another victim of your greed.”

“I’ve given you gifts the richest men could never dream of owning. What does my God desire of me?” asks the king, sneering.

“You know what I want, Aestith.”

“And you know I can’t give it to you.” His voice clings to the stone walls of the throne room. “We must cleanse the impure from our city. You don’t follow your own doctrine.”

“Then you won’t stop the murder,” Shaltet says with the last of his will to live.

Shaltet bites his cheek. If not the king’s place, it must be a god’s. He draws the pistol. Aims down the sights. Pulls the trigger before he can reconsider. Bleeding between the eyes, Aestith drops dead. And then Shaltet is fighting a war of his own.

Gods, all of them armed, arrive in dozens on the beach. They found something in the water, but it wasn’t what they wanted. When sentinels dressed in black come to meet them, a goddess with eyes the color of earth warns them to keep clear. They stop at the edge of the trees, murmuring amongst each other. She approaches them alone. “We’re looking for a missing officer. Do you know anyone named Enzel Shaltet?”

“No,” says a sentinel of the gods, fussing with her gold necklace. “I don’t know him.”

i like my boyfriend and airplanes and that’s it.

More stories from Rose Leffler and writers in Futurism and other communities.