SpaceX embarks on the construction of giant floating spaceports

by John Anderson 15 days ago in future

The sites will serve as launching bases for Starship rockets in the direction of the Moon, Mars and Earth. 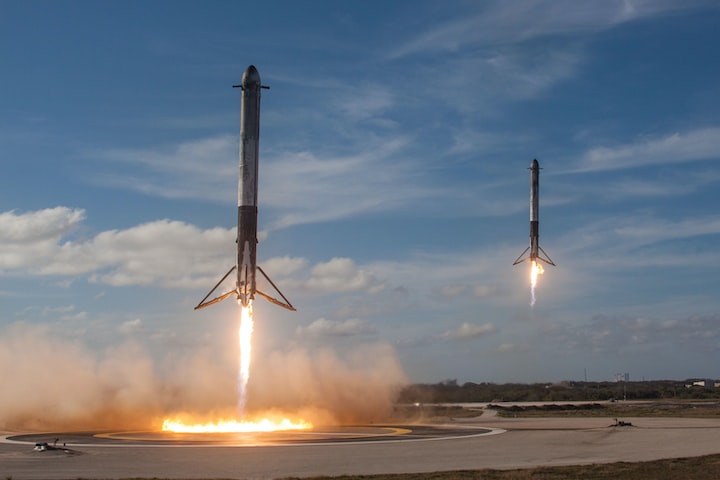 It all started with a job offer. The aerospace company SpaceX has indicated on its site that it is looking for engineers who would work "to design and build an operational installation for launching offshore rockets". The location? In Brownsville, Texas, where Starship rocket prototypes are currently being tested.

Asked on Twitter about these offers, Elon Musk, the general manager of the company, was quick to respond: "SpaceX is building floating super-heavy class spaceports for Mars, the Moon and hypersonic voyages around of the earth."

SpaceX's future floating spaceports will, therefore, serve as launch sites for these Starship rockets with two objectives: to make interplanetary journeys and, more surprisingly, to facilitate travel on Earth.

It's an old dream of Elon Musk. Its Starship rocket, designed to transport 100 passengers one day, must use this launch base to reach Mars and the Moon to "make humans an interstellar species".

On the other hand, the American company also plans to take off its rockets from these marine platforms for hypersonic land trips, called "Earth to Earth".

The idea is that by traveling onboard or beyond the Earth's atmosphere, fuel costs and flight time would be significantly reduced, says Techcrunch. Traveling from one floating spaceport to another, a trip from Paris to New York might only last an hour.

In the stars and under the sea

If everything works as expected, several rockets could be launched per day from these platforms. Which is problematic, explains Futurism: noise.

Elon Musk seems to have planned the coup and, in November 2019, he indicated that the spaceports should probably be more than 30 kilometers offshore, to avoid any excessive noise.

To reach these massive floating spaceports, the American company would again have an ingenious idea, on which it has been working for several years, notably via The Boring Company, another Musk company. It is a question of connecting the platforms to the ground thanks to the hyperloop, a means of transport at very high speed installed in a tunnel dug underwater.

Large projects are therefore underway at SpaceX, and priority would for now be given to the Starship rocket, reports Business Insider. After the successful launch of the Falcon 9 rocket and two NASA astronauts at the International Space Station, Elon Musk is, therefore, free to realize his other space dreams.

How to treat astronauts in space?

NASA has been studying how space changes the functioning of the human body for a long time to prepare the great objective of a trip to Mars. We already know that it weakens bones and muscles, modifies the movement of fluids (like blood flow) or exposes to radiation that could promote cancer.

But several scientists would like to draw attention to everything that is still unknown, including the use of drugs . Should the doses be changed to make them effective enough? How to store them so as not to risk intoxication with expired pills? Does the human body in microgravity absorb molecules correctly?

The answers to these questions are currently pending. "For the moment, our hypothesis is that the drugs are absorbed and distributed to the tissues in the same way in space as on Earth, ditto for how they are metabolized and excreted by the body", explains for Ars Technica Virginia Wotring , professor at the International Space University in Strasbourg.

"It would make sense that the drugs would have different effects on the altered physiology of astronauts," said Dr. Tina Bayuse, who directs pharmaceutical operations at the Johnson Space Center for NASA, however. "Any [any of these changes] could make any medication less effective or increase its side effects."

The problem lies in the fact that it is impossible to carry out very successful clinical studies in space: the tests are carried out on too small a sample of individuals and lack controls. Going to space is very expensive, which restricts the repetition or validation of experiments. In addition, these cannot be multiplied on each trip.

Most of the tests, therefore, take place in laboratories which artificially recreate conditions encountered outside the Earth's atmosphere.

That's why Virginia Wotring and LaRona Smith, a clinical administrator at the Johnson Space Center, created an application for astronauts to record their medication intake while in flight.

Despite an early interruption of the program due to a technical use problem, the two researchers published their results in January in the journal of Aerospace Medicine and Human Performance. They report receiving data for 5766 drug uses - thirty-eight times more than all records combined for previous space flights.

According to their results, it seems that the use of drugs is higher onboard the International Space Station (ISS) than on Earth - especially when it comes to pills to help sleep or painkillers like ibuprofen.

Above all, the researchers report that "most of the drugs have been considered partially effective" by astronauts. A result that worries them, especially because it shows how little is known about the risks associated with the expiration of drugs or an overdose.

"I don't want to sound like the alarm," warns Rebecca Blue, who works with the Aerospace Medicine and Vestibular Research Laboratory at Clinic Mayo in Arizona. "Because the truth is just that we don't know."

An observation that seems to accompany the rare studies already carried out on the question. Published in Clinical Pharmacology in 2005, one of them already showed that ciprofloxacin, a conventional antibiotic, seemed to have more trouble penetrating body tissue because of micro-gravity - according to tests on six patients in a hospital in Florida. Except that the technique used to reproduce a space flight, although excellent according to a 2011 study, cannot completely imitate the real conditions.

To obtain more data, NASA is, therefore, working on implementing a protocol similar to that of Wotring for future missions. Astronauts have a medical office provided: they find, among other things, caffeine, sedatives, antibiotics, adrenaline, sleeping pills, antidepressants, or hormones.

That said, the astronauts mostly cross their fingers so that there is never any reason to perform medical surgery in space: an emergency would be statistically guaranteed for a crew of six people en route for a 900-day mission on Mars.