An angel, a demon, and a dreamscape where they share everything. 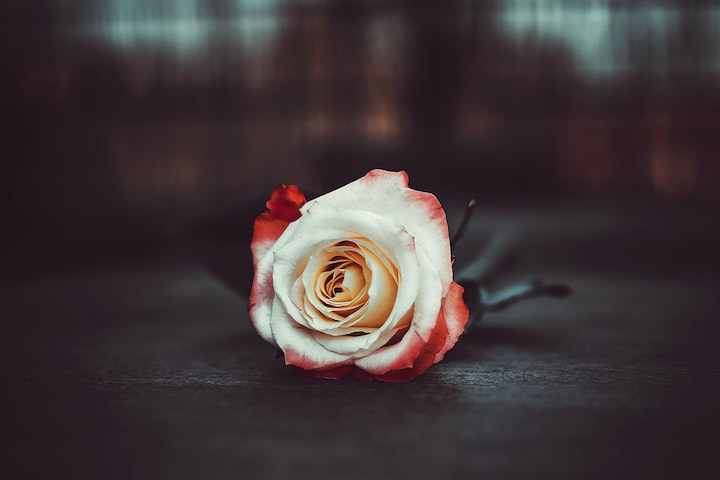 Photo by Sindy Strife on Unsplash

How many lifetimes has it been? He wondered. When was the last time we were face to face?

Shame filled him as he stood before her, but he forced himself to meet her guarded stare. They were the only beings in this interdimensional space, after all, so he had nowhere else to sensibly settle his gaze. To look her straight in the eye, and say...

"You look lovely," he remarked.

Lovely, he reminded himself, was an understatement. She wore an off-the-shoulder cocktail dress shaded a blue so dark he was certain he was peering into the deepest recesses of the ocean. Silver straps were fastened around her ankles, holding her high heels in place. Her nails were painted an onyx black, matching the curls that spilled over her left shoulder. Her eyes were like sapphires as they pierced his, gathering information.

She's trying to figure out whether or not I'm sincere, he realized. In their recent reincarnations, angels were always wary of demons. How ironic of Death to fear Life.

He took a step to the right, gesturing for her to follow. She acquiesced, her hands steady at her sides as she strutted toward his intended destination: a small, round table, set for two. A single tall, white candle acted as a centerpiece, and a cart beside the table offered a series of cubed fruits, whole berries, rare cheeses, and two unopened bottles of red wine. Nothing else existed in this space; he had not bothered to create anything else to liven up their scene.

They took their seats, and shadows erupted from beneath her, forming two separate figures. The first offered various berries and cheeses to Death, while the second held the two bottles out to Life. Both bore similar labels, so he could only assume that both were the same Merlot.

"Whichever is fine," he assured the shadow.

"Is it, though?" she sucked in a sharp breath, feigning ignorance. Teasing him.

He cocked an eyebrow. "How about you choose the wine, and I pick the food."

Death smirked and addressed the shadow. "We'll have the Petit Verdot, please."

"Hmm..." Life's hazel eyes skimmed over the overflowing platter. "We'll have all the berries, all the nuts, and an assortment of cheddar, gouda, and Manchego."

The shadows went to work, with one piling the requested foods on their plates as the other poured their drinks. Once the dark figures stepped back, the two spirits raised their glasses.

"To the mission," Life vowed earnestly.

They tapped their glasses together briefly before they each took a sip; hints of fruit and oak came to Life's mind as soon as the alcohol washed over his tongue. He was just setting his glass down when Death solemnly whispered:

"And may our banishment last forevermore."

Life sighed. "We can't stay here forever, Candy. We already tried it your way--we lived out at least a hundred lifetimes before they sent the others here on a rescue mission. One of these days, we'll need to go back with them."

"We didn't ask for them to come," countered Death, fork in hand. "I sure as hell didn't twist any arms--did you?"

" 'But' what, Blake? You want to give up our mission? Are you willing to toss aside everything we worked toward--the lives we lived as humans, the missions we had to sabotage--are you willing to give all of that up, go back home, and do what they want you to do?"

The two spirits were silent for a moment. "Would it really be so bad," he began. "To marry a friend? You make it sound as if they're asking us to disintegrate Gaea or commit genocide against the humans. All they ask is that we put our people before our own desires."

Death's expression hardened. " 'Our people'? What the hell do they have to gain from an arranged marriage?"

Life had opened his mouth to retort when Death cut him off. "Nothing. The answer is nothing. There isn't a single damn benefit for either of our planets."

Life sighed and rubbed his temples. "It's hard to believe this is my first time seeing you since we died in the nineteen-forties. You're the same as always."

She stabbed the tines of her fork into two blueberries. "And you're desire to please your parents is as revolting as ever, so I'd say we're about even."

"This has got to be the worst first date I've ever had," he grumbled before sipping his wine.

"Even worse than the time I killed you?" she teased. Death had stabbed a sliver of cheese with her fork, pairing it with the dried berries before delivering it to her plump lips.

He set down his glass and nodded. "I would absolutely welcome death. Every life we live on this planet is filled with agony. In my last life, I was killed while still in bed with my soul mate--and she was too broken over my death to stop her own. Aren't you worried about your mates?"

Death paused from stabbing cranberries and blueberries to mull it over. "No. My mates aren't weak--they can protect themselves. The same goes for your mate. She's not the helpless lamb you make her out to be."

Life frowned. She's getting on my nerves. "I don't make her out to be helpless. Far from it--I'm pretty sure she's saved me more than I have her."

She scoffed. "Yeah, I have no doubt about that."

He could tell that she had expected him to blow up on her, to explode with a fiery rage that had become a habit for him to show her. Instead, he sat there quietly and studied her more closely.

Bags sat beneath her deep blue eyes, self-inflicted bruises from her loss of sleep. Her shoulders were slumped, and a few strands of silver shone from deep within her onyx curls despite her vessel being only twenty-two years old. She looked tired, as if the strain of simply keeping up appearances was exhausting her.

"Candy." He called her name gently, as if to coax her away from a cliff. Her gaze remained on the table as he spoke. "I know you're probably as tired as I am. We don't have to keep doing this, you know. We can go back to being friends. We can go back home."

She shook her head, still avoiding his eyes. "I can't let her win. You know what'll happen if she has access to the portal. You know the damage it'll do if it's left in the wrong hands."

"We can fix that," the demon of Life and Creation insisted. "We can set preventative measures while it's still in our hands. You can be my mate and protect the portal."

The angel of Death and Destruction shut her eyes and stood abruptly. He watched her collect her thoughts for what felt like an eon. Finally, she opened her eyes, and they appeared almost black as she vowed:

"I won't risk the safety of this planet, and you cannot force me to comply."

Then she stepped away from the table and began walking back the way they came. Tendrils of smoky, ink-like shadows erupted from beneath her heels, bathing her in darkness.

"After all," she reminded him, a playful lilt to her words. "You and I both know that Life will always lose to Death."

Visit my blog, Sisters of the Shadows, to discover secrets, lore, and more about the world of The Chronicles of Life & Death!

More stories from Natasha Penn and writers in Futurism and other communities.