Hanna, The Barberian, and the Quest of the Four Portals

by Kent Brindley 6 days ago in fantasy

Part 3: The Second Portal/Divided, We Rise 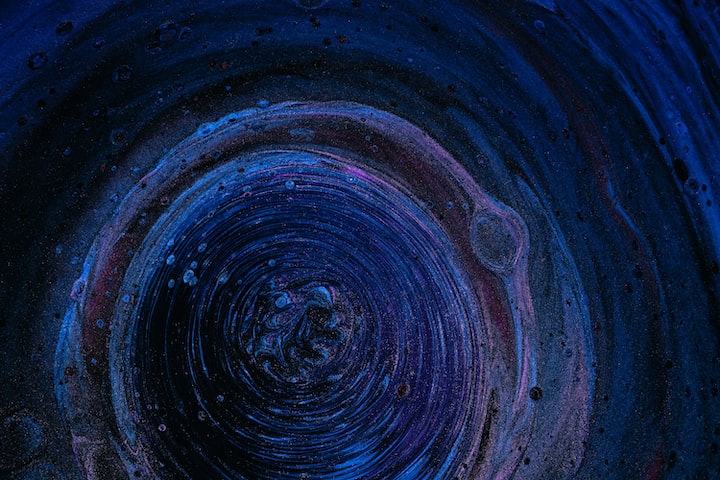 Last time on Hanna, The Barberian...

The barbaric fool and her followers REALLY thought they had caught me!

What self-respecting sorceress only generates ONE magical portal to allow chase? The flippant fools were dumped off to waste their time on a forest picnic; until that distraction no longer amused me.

Not even the heroes know where they're going this time! And if that doesn't count as my first, and only necessary, victory, then what does anymore...?

The spiral vortex ended in the vastness of deep space. That was where Adamis found himself. He gasped for but a moment before he tested his magic. Success; he could breathe in space now.

"Hanna, Ungah," Adamis called, glancing about, "though we are trapped in the vacuum of space now, my magic can allow us to breathe."

Silence answered him. Of course; even Hanna and Ungah understood enough to not risk a response until they could safely breathe. Adamis chuckled at his own ineptitude and glanced about.

Nothing. Adamis sighed to himself.

"What I wouldn't give right now to see that crazy redhaired Zon; or the fool savage, Hanna." he grumbled in the loneliness of space.

Several crudely drawn buildings surrounded Hanna as she promptly descended to Earth. However, these were at least buildings. The barbaric woman then glanced down at her hands in question. She was still a washed out, crudely drawn representation of herself. Nonetheless, she was still human. Adamis was owe his due credit for that, in spite of her personal thoughts on magic or her understanding of any less than physical conflict.

"Well done, Adamis." she declared over her shoulder in the twilight blackness of the nameless city. "I am at least human again and..."

"...Hold, you!" a voice besides Adamis's answered her.

Hanna whipped around to find two like dressed, twin-drawn men. One of them held a pocket sized trigger weapon; the other held a giant weapon.

"I do not know this 'you;' I am HANNA, THE BARBERIAN!" she declared.

Instantly, the giant device went off and Hanna lay on the ground.

"Never heard of you!" The masked, indistinguishable man retorted. "Though, now you've heard of D.A.R.K.!"

"...and our Graviton Ray will keep you grounded for at least fifteen seconds!" his partner with the much smaller weapon retorted.

With that, they both chuckled at her expense as Hanna struggled to rise early. The laughter was only interrupted by...

A silhouetted man with white wings and in a bronze suit with orange collar, armlets, and hood swooped in, followed by a brown condor representative of his name.

"A friend of yours to attack from behind?" Hanna demanded.

The two men sneered at one another.

"A grown man who fears the night!" one of the D.A.R.K. agents retorted.

"You do not resemble a member of D.A.R.K.!" he bellowed, touching Hanna on a shoulder. "You had best not be deceiving me!"

"Did I knock down and bully a stranger?" she demanded.

The condor screeched in reply.

"Yeah; and we'll take care of both of you!" the armed man with the tinier flash weapon answered, aiming.

"I'll take that gun, mister!" Condor answered, grabbing the tiny gun and uppercutting him with his spare hand.

With that, Condor had to kneel.

"Fiends, that single punch took much of the strength that makes me a superhero after sunset!" Condor grunted.

"Why do you think we're called D.A.R.K., Pigeon-Man?" demanded the standing D.A.R.K. agent who had had the far more serious weapon all along as he aimed the giant weapon. "This'll ground you!"

Hanna had the opportunity to stand once more and much of her strength back. As the D.A.R.K. agent gloated over Condor's kneeling form, Hanna bunched up her fists. Perhaps this Condor required a nightlight to be an effective hero for more than three minutes passed sundown; she had no such weakness.

Suddenly, there was a screech and Defender flew overhead once more with two steel sticks. The end of each pole had a red crystal; or...

"My Ruby Spears!" Hanna bellowed up at Defender. "Drop them here, good bird; I know what they are!"

Defender did just that and Hanna, armed once more, gave a lunge.

His answer was a barbarian war cry as Hanna kicked him and went the weapon flying.

"Those red jewels!" Condor gasped. "I sensed the power of the sun in them! Point them here!"

The final D.A.R.K. agent had the pressure of Hanna's boot against his back and she had plenty of time to do as asked. Soon, Condor rose up once more and fired a strange solar bolt at the Graviton Ray. Its smoldering remains were soon all that was left.

"You are safe now, Hanna, the Barberian!" Condor declared as the police pulled up to the scene. "Those two D.A.R.K. operatives won't be bulling anyone else anytime soon!"

"It was my pleasure to fight alongside you and your pet condor!" Hanna added.

"Yes; fare thee well!" Condor answered as the sun rose. "Come, Defender; we leave this one well enough alone to figure out her new place! CAHHHN-DOR!"

Defender screeched back and took to the air. With that, Hanna was left to wander unknown streets in her decidedly garish garb.

"Thanks anyway, hero-man!" she spat at the idea of Condor...

Ungah did not know much about the jungle planet of Quartan or its people. She was fairly certain that Ozor and Grak did not belong there and certainly not leading a mutant army.

Ungah awaited her moment, now that she somehow had her weapons restored, and lunged with a primal scream. That shout had, naturally, spoiled an ambush idea and the mutant armies pushed back against her.

Three crudely adorned jungle people and a pack of animals stood on a cliffside to watch.

"What are all of those creatures, Rando?" the youngest of the people asked.

"I know not who they are, I'do'no; but none of them belong here and one of them seems to need our aid!" the older man bellowed. "Loon, Leep; see to pulling the hairy one to safety."

A pair of amorphous blobs gurgled and giggled in response and both soon extended and tugged back at Ungah before the stunned mutants could react.

"Be careful with that one; it seems to have been through much!" the blonde, scantily-clad woman added.

"Worry not, Glamara." Rando answered. "Now, Rok, your monster strength! Tundrous, your rampaging speed and slingshot horn! Izod, your energy eyes! Drive these others back!"

A plethora of animal cries was the answer and, soon, the mutants were gone.

After a while, Ungah awoke. Then, with a sip of water, she gave a grunt that the giant stone gorilla echoed right back.

"You are well now, then?" Rando asked, kneeling before Ungah. "You are indeed a great warrior then!"

Ungah gave a gurgling cry in response. The other animals made their own pronunciations as well before Rando spoke once more.

"I fear that we know not of a good wizard or a barbarian on our world." Rando answered . "Come; we and our pets, protectors, and friends, The Stronguns, will conduct a search!"

Ungah gave a cry of protest and rose from her resting position before picking up her weapons once more.

"She wants to help us too, dad!" I'do'no declared. "But doesn't she speak human talk?"

"I'do'no, what foolish words!" Rando snapped. "Glamara, you will stay to the tree house with Loon and Leep! Others, we go!"

With that, the expedition went on their way...

Adamis's lonely floating through space had been long since interrupted by a giant green warcraft and a sleek star cruiser. As the two ships around the helplessly floating man started firing on one another, the sorcerer had seen no other choice but to surround himself in a shield of his own magic.

Finally, Adamis tired of floating and had to chance sprawling himself atop the sleek starship in hopes that that was the good guy; if there was one.

As Adamis struggled to maintain consciousness, the shield of the starship yawned open.

"In here; quick!" a booming voice declared. "We know that we are on the same side against Zurant and his humanoid ants!"

"Zurant?" Adamis repeated as the costumed man took him by an arm and dragged him into the cruiser.

"Yes; I will deal with them!" the man added. "My twin understudies and their space cat will take care of you. I only ask that you close the ship's shield behind me as I leave."

"You've got yourself a deal, Mister..." Adamis began as he was situated in a rather crowded backseat.

"...STARRR PHANTOOOOOM!" came the reply as this Star Phantom flew under his own power and willingly entered the enemy war ship...

What happened next took about five seconds before a huge gaping hole was blasted in the side of the giant green cruiser and a pack of humanoid ants were flying helplessly away.

"You've not seen the last of me, Star Phantom!" Zuran bellowed.

"Wow!" the boy called Ace declared from his spectator seat.

"Terrific!" Ann added from Adamis's other side.

Fwip, the Cat, meowed his encouragement from Ann's lap.

"Star Phantom just did that in one percent of the time that it took his space ship to do battle?" Adamis asked.

Before Adamis could agree, or even thank them, a light spiral appeared again. There was no vortext this time to pull him away; Adamis just seemed to fade from view as the twins and returned Star Phantom watched him vanish in astonishment. Then, not moment's later, Adamis had vanished from their memories as well as little more than a spector from a future place deposited into their world. They wouldn't know it; but the now-forgotten Adamis had finally rejoined Hanna and Ungah; albeit that their happy reunion was to be trapped again by another portal...

What dangers await our heroes next time? Will they prevail? And where in the world are they going...?

Thanks for reading; enjoy my works.

See all posts by Kent Brindley →