In the wilderness, the book reads you. 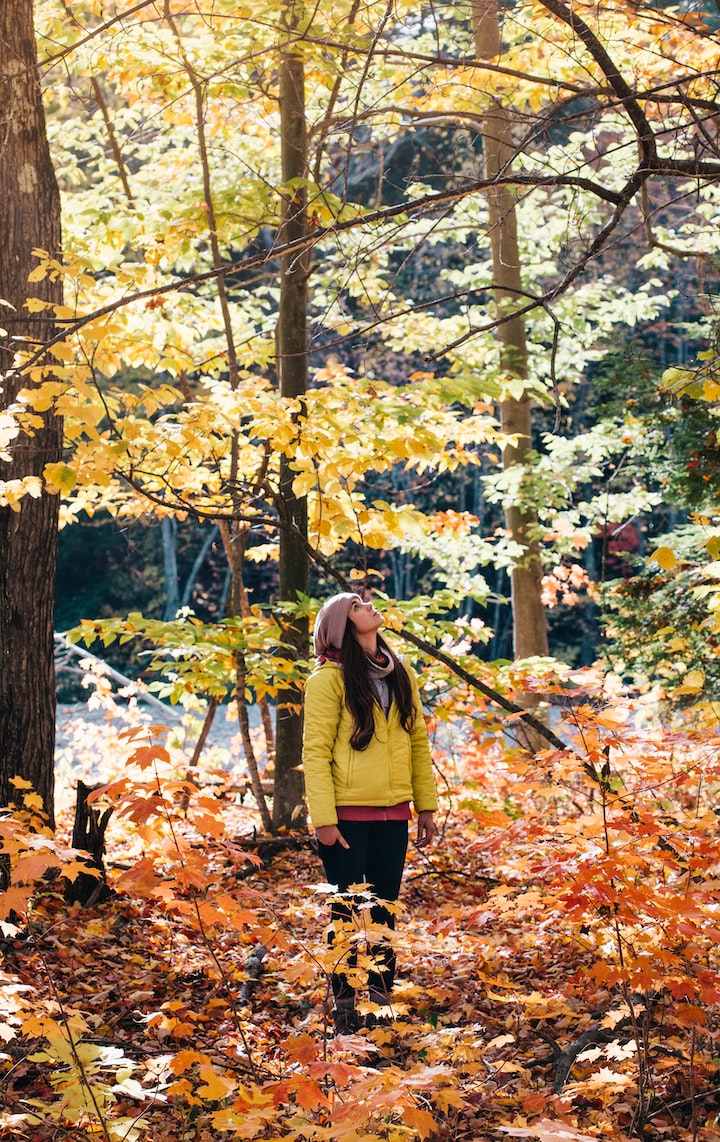 If you asked most of their friends, Miranda and Drew were the most wholesome couple they knew. They adored animals and dedicated their lives to creativity; not in a way that tried to impress people but a genuine way.

On this particular day, they were thrilled to be out on their first fall walk of the year. Miranda, a pianist, and Drew, an art teacher, enjoyed spending their free time strolling through the fresh air.

The couple sat down at a bench in their local park. The park was surrounded by a wooded area, and occasionally they would spot a bunny or two. Today, however, would be much more significant than that.

As they began to chat, Miranda paused mid-sentence, as an object about ten feet away caught her attention. She walked over to find a little black book. She recognized it right away as a Moleskine notebook.

“Someone must have lost this.” She proclaimed empathetically to Drew.

“Maybe there’s a name on the ‘in case of loss’ notice.” He suggested.

As Miranda began to check for a name, the pages of the book began flipping rapidly. The two watched in shock as she held it by the back cover and it autonomously flipped through it’s own pages. Suddenly, they were looking down at one page in particular. Miranda read it aloud:

“The person reading this, has a heart made for the arts. You are passionate about creativity and sharing your talent. Should you choose to accept today’s adventure, you will find a generous prize at the end. There are several rules, however. One: you may seek assistance, but only from someone who shares your affinity to the arts. Two: each next instruction will appear as needed. Until then, these pages will be blank. Three: You have until dusk, and the opportunity will be gone. Touch the next page to begin. Good luck!”

“I must be dreaming!” Exclaimed the couple in unison. They laughed, as they both looked down at the message in confusion and wonder. Each hovered a hand over the blank page next to the message.

“Should we go for it?” Asked Drew.

Upon touching the page, they were instantly teleported into a wooded area.

Slightly disoriented, the pair scanned their surroundings. They were standing in a clearing. Their phones had disappeared from their pockets, and they didn’t know how far they had been sent into the wilderness. They noticed a large rock which appeared to have something glowing on top.

“What’s that? I think we should check it out.” Suggested Miranda.

“Perhaps you might venture as two, but progress can be made with just you. For what can be done as a pair, may be accomplished sooner apart, if you dare. Go to the glow to be in the know.”

“I think it’s telling us that if we go separate ways, we might get to the prize faster.” Miranda proclaimed.

They walked over to the rock to find two beautiful aquamarine gemstones. Miranda looked down at the book as it flipped to further instructions. She read:

“Use the aquamarines to see, hear, or when in fear. For they will keep you linked, if you thrice blink. No danger may come to you, for the gems will block it, if you keep them in your pocket.”

Miranda squinted as she made sense of the message. “The gems will help us communicate telepathically if we blink three times?”

“There’s only one way to find out. I’ll go hide and we can try it.” Said Drew.

They each took a gem and Drew took off.

A moment later, Miranda felt a strange energy. She could feel her eyelids fluttering, as if prompting her to blink. She blinked three times and could instantly see Drew!

“Can you hear me?” His voice reverberated in her head, clear as day. She could see him holding the gem.

Drew could see Miranda too. He listened for her reply.

“Yes, I can hear you and see where you are!” She replied.

Drew jogged over back to her. “It worked! And luckily, as long as we keep these in our pockets, nothing can happen to us. At least, not until dusk. I think we should get started. I’ll head to the right, you go left. Sound good?”

“Good plan. I’ll let you know when we have a message from the Moleskine. For now, keep an eye out for anything interesting.”

Drew couldn’t help but feel slightly worried. He had always felt protective of her, and even though he knew that they’d be okay, he reached out and embraced her for a moment. “Be careful.”

Miranda trudged into the trees. She wasn’t sure what exactly she was looking for, but she trusted that she would find it soon. Before she knew it, the notebook flipped open to a message, which said:

One is bumpy all about, while the other has a snout.

Suddenly, she heard a small voice.

Miranda paused and looked around. She didn’t see anyone.

Suddenly, a toad leapt in front of her from a nearby fallen branch.

“I’m sure it’s strange to meet a talking toad, but I assure you, I’m harmless.”

The toad hopped over to his resting spot on the branch.

Miranda spoke as she followed him. “Well, you’re right about that. I certainly didn’t think I would be talking to a toad today - or ever, really.”

“I believe I have something you need.” Said the toad, looking towards a wooden puzzle piece. “There are four of these throughout these woods. You must put them together, to complete your adventure and receive the prize.”

“You are most welcome, Miss!”

Miranda picked up the puzzle piece and reached into her pocket for her aquamarine. She blinked three times. “Drew! I’m talking to a toad!” She could see his location in her mind, and he wasn’t too far away.

His response came through clearly. “This day seems to get wilder by the minute! What’s that in your hand?”

“There are four puzzle pieces we need to collect. This sweet little toad has given me the first one. You’re looking for something with a snout, okay?”

“A snout? Possibly a wolf then...” Drew gulped. But he knew nothing could hurt him.

Miranda and the toad said their farewells, and she set off walking again.

Meanwhile, Drew could hear water up ahead, and realized that he was coming up to the stream. It was there that he saw a beautiful timber wolf drinking. He wondered if he should say something to it. This was definitely the strangest question he had ever asked himself. He decided to give it a try.

The wolf looked up at Drew, and as he had hoped, it spoke.

“Hello, I suppose you’ve been sent for the puzzle piece.” She replied.

“Yes. Thanks for your help!”

“Ah, no worries, it’s just under here.” She moved a stone with her paw and retrieved the puzzle piece from under it. She trotted over to Drew and dropped it at his feet. Drew gave her a friendly pat on the head and thanked her.

As he turned to leave, he slipped on some mud and dropped the piece into the stream. It began to float away with the current. He chased after it along the bank, but lost sight of it.

The wolf dashed into the stream, thrashing around as she chased. Eventually, the piece was stopped by a rock in the way. She brought it back to Drew.

“Close one! Be careful.”

“I will, I can’t thank you enough.” He said, exasperated.

Meanwhile, Miranda had been chatting with a comical black bear who, if he were a human, would have a great career in stand-up comedy. The bear was pleased to have some good company, since hibernation was only weeks away.

Miranda had collected the third puzzle piece from him and was just about to be on her way, when Drew approached.

“Well, do I have a story for you!” He exclaimed, as he proceeded to tell her what happened with nearly losing the puzzle piece.

The two decided to seek the last piece together. The book opened up to reveal the next message, which said:

She’s spotted white, she has perfect vision in the night.

The pair travelled a good amount before encountering an adorable fawn.

“Congratulations, this is the last one.” She said, as she approached Drew with the last puzzle piece.

“Yep! Let’s put this thing together!”

The couple assembled the wooden pieces together, which formed an evergreen tree.

An envelope slipped from the notebook. Miranda opened it, to find a check for twenty thousand dollars.

“From who?” Asked Drew, excitedly.

“Interesting name - I don’t think we know a Zeus Otrix.”

The book flipped to a new page and another message appeared. Miranda read:

“Well done! You have completed your journey, and have discovered your prize. I am Zeus, a wizard and guardian of these woods. My mission is to promote creativity. I have good faith in you to be generous with this money, and use it wisely. Touch the next page to end your journey.”

They looked at each other in surprise.

“A wizard? I guess that would explain, well, everything.” Said Drew.

“I guess it’s time to go.” Responded Miranda, who in a short time, had become attached to the woods. “Thank you for everything, Zeus. And thank you to the critters we met along the way.”

The two each placed a hand on the book and found themselves back on the park bench in seconds. The book and gems were gone, and their phones were back in their pockets. Miranda was still holding the check.

“Do you think we should try to find Zeus?” Miranda asked Drew. “I want to know more about him.”

He sighed. “Some things are best left a mystery.”

I’m Katrina and I’m from Canada. It’s good to e-meet you! My preferred topics to write about are movies, t.v. shows, and fantasy fiction. I also love the variety of entering Vocal’s challenges. I hope you enjoy my work!