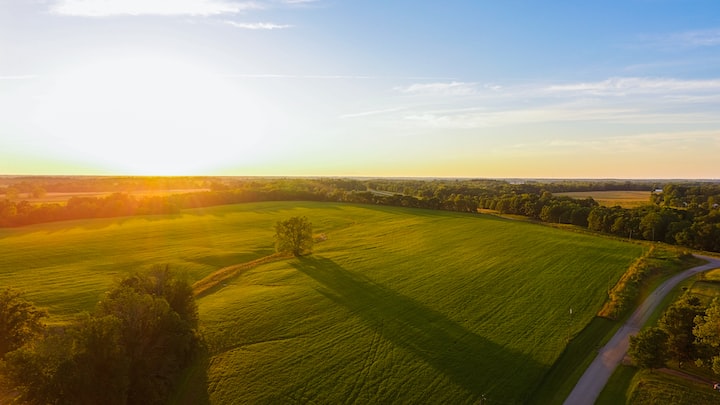 Photo by Carl Schlabach on Unsplash

“Frank has asked that we join him at the Ohio USSF Research and Development Center,” Prof. McNeil said without preamble.

“When?” Carl asked, taking a bite of his taco.

When the trio had arrived back at the hotel, Prof. McNeil invited them to his room for a late lunch and had ordered steak, shrimp, and fish tacos from room service.

“He will be leaving this evening after he concludes business at the Pentagon and has requested us to join him on his flight,” Prof. McNeil explained. “A hover-car will be here for us in about two hours.”

“I don’t have anything more pressing to do. Seems pointless to finish my dissertation now,” he said with a shrugged as he finished the first taco and grabbed another.

“Excellent!” Prof. McNeil said, clapping his hands together before, he too, dug into the tacos.

They finished their late lunch and went to their rooms to repack their bags. Carl had barely taken anything out of his own bag so, had finished the task quickly. To pass the time, he grabbed a beer from the mini-fridge, turned on the flatvid, and sat down on the couch to watch the news.

Since the Presidential election would be taking place this year, the news centered around the campaigns taking place around the country. Carl soon grew bored and his mind wandered towards their new destination. He was going home. Well, sort of. He could rent a cruiser and go see Ma and Pa after he got settled in at USSF.

“Breaking Story: We have just been informed that President Simmons has cancelled his rally in Texas that was scheduled for later this week,” the anchor announced.

When door chime sounded, he turned the flatvid off, grabbed his duffle bag from the bed, and went to answer the door. It was Lena and Prof. McNeil.

He followed the professor and Lena through the hall, to the lift. Lena looked as if she had just gotten out of the shower and as if she had been crying again. He didn’t want to embarrass her by trying to comfort her in front of McNeil, instead, he mentioned a certain resemblance between her and her aunt’s Irish setter after the water balloon fight that they had participated in at her little cousin’s birthday party last year.

“Ow!” Carl complained, mockingly when Lena turned around and slugged him in the shoulder.

“I don’t look like a drowned dog,” she protested, angrily. But Carl could see a smile dancing in her eyes.

By the time they had reached the lobby, Lena seemed to be in a much better mood. As they exited the hotel, the sky was dark, but the hotel lights kept the entrance area well lit. To Carl’s surprise, there was no Q7 waiting outside, but a Gallivant X series, stretch hover. The driver opened the door for them and took their bags, stowing them in the rear luggage compartment.

Carl allowed Prof. McNeil and Lena to climb in first before entering himself. Inside sat Director Frank Wiess and the woman he had seen at the conference earlier that day.

Once they were all situated, and the vehicle was moving towards the private air strip, the large man introduced the woman sitting next to him.

“This is my assistant, Amelia Zimmer,” motioning to the woman who was tapping away furiously at a data pad in her hand. She stopped at the mention of her name and looked up.

“It’s a pleasure to formally meet you all,” she said before returning her attention to the data pad.

“You must excuse her. She is reviewing the decisions that were made today and coordinating with my team back at the office,” Frank explained, apologetically.

“Think nothing of it,” Prof. McNeil said, waving off the apology.

Director Wiess smiled again, graciously and turned his gaze on Carl. “I understand that you are a computer programmer and that you had applied for the original deep space mission,” he said, not a question but a statement as he scrolled through his own data pad.

“Looks like all of the tests were completed as well as the physical examination. High marks on the tests and the physical came back great,” the large man said, more to his self than to Carl. “Very good!”

Then he looked up at Lena, “Dr. Lena Fitzgerald, I see that you have applied as well, and that you are in the field of Robotics.”

“You have high marks on the test but have not completed the physical as of yet?”

“Not yet,” she replied to the unspoken question. “It was schedule for next month.”

“Well, that can be remedied when we get to the office. Should everything go well, and should you accept, you both will be offered positions as colonists for this undertaking.”

After a few minutes of silence, Lena spoke up.

“I am honored for the opportunity but…” she began to object.

“We know you have family,” Amelia interrupted. “Beverly and Brian Thompson, your aunt and uncle on your mother’s side have already been put on the list of consideration for the guardian positions as they are both experienced college professors at Colorado University in the fields of Literacy and History, respectively. Your cousin Jordan will be too old for a minor colonist position at the time of departure. However, he has maintained a 3.8 grade point average and, should he pass the physical examination and score high enough in any of the position tests, will be added to the list of prospective maintenance crew. Jennifer Thompson is currently thirteen and is a straight-A student that shows potential as an apprentice for the Robotics program. Finally, Julie Thompson is currently three years of age and will be considered for a position as a minor colonist on the premise of her relation to you and your family, should she pass the necessary physical examinations."

Lena looked at the woman, a bit startled. She had quite extensive knowledge of her family.

“Why would you do any of this for me?” she asked, looking as if she was going to break down crying again.

“Honestly, it’s not specifically for you so much as it is quite rare to find an entire family that meets the requirements that we are seeking,” Frank said. “We have also placed your brother and his wife on the list for potential guardians,” he continued, looking at Carl.

Carl stiffened instantly. He was unsure of how to respond to the inclusion of his brother and Felicity. He had not spoken with either one of them in a long time. The feelings that simply thinking about them invoked still hurt. Even so, he loved his brother and Felicity and he certainly did not want them to die if they could be saved.

After a few minutes of grappling with his turbulent emotions, he finally responded, “They would be a good choice.”

“Excellent,” Frank said, completely oblivious to the internal struggle within his own head.

A short time later the Galivant was pulling onto the tarmac of a private airstrip where a shuttle-jet awaited them. The driver opened the door for them and transferred their luggage as they boarded.

The shuttle-jet was identical to the one they had been on the day before. Carl grabbed a seat next to Lena on one of the couches while Director Wiess, Amelia, and Prof. McNeil took captain seats.

Soon, they were in the air. When Carl looked out one of the windows, he could see the lights of D.C. zipping past quickly as the aircraft picked up speed. The lights of D.C. faded off into the distance as the craft gained more altitude to fly over the Appalachian range.

Carl could hear Prof. McNeil speaking quietly with Director Wiess as he marveled at his view of the forested mountains stretching out below him. They were so different from the one’s he had come to love during his years of school in Colorado. These were gentle, rolling giants asleep under a green conifer quilt whereas, the Rockies were jagged, red behemoths with skirts of pines.

All too soon, the rolling mountains gave way to plateaus with cities that twinkled with millions of lights before giving way yet again to the plains he knew so well. After nine years, he was home.