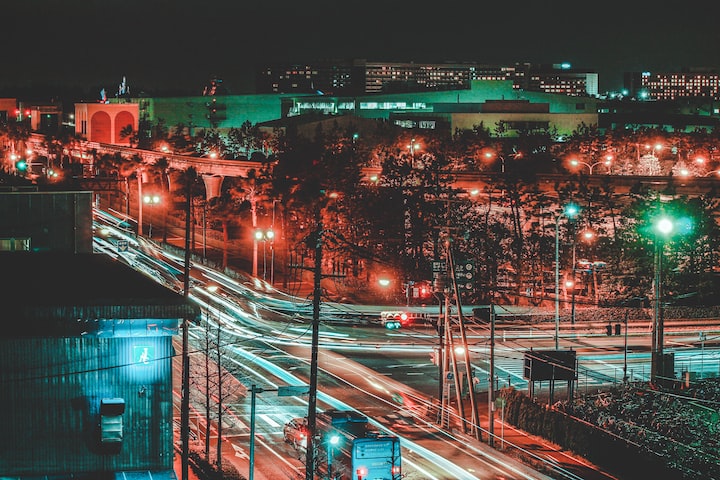 Amelia sat at her large oak desk, right outside of Frank’s office. He had offered her an office of her own two doors down from his, but she had politely refused. Everything was already set up the way that she wanted it here and moving everything would disrupt her efficiency, costing valuable time that they just did not have.

The message alert flashed on her glasses display in her peripheral. Focusing on the alert, she brought the message to the forefront of her view. When the message opened, a voice recording began playing.

“Good morning, Miss Zimmer,” came the mature and authoritative voice of Kendra. “I apologize for having missed your call earlier, but it could not be helped. If it is amenable to you, I am available for a virtual conference for the next hour or I could come to you for a face-to-face meeting in two days. Please let me know which is best for you.”

When the message ended, Amelia got up from her desk and made her way into the empty office that she had refused. Inside sat an empty desk with a high-backed chair with a single holo-form in the center. She took a seat in the chair, straightened her jacket, and connected her tech-glasses to the holo-form.

She had built several pairs of these glasses herself over the years after disassembling a store-bought pair when she was sixteen. With each new construction. they had evolved. She absolutely loved her newest set. They could do anything, even things highly advanced computers could do from composing e-mails and browsing the web to creating, altering, and projecting complex diagrams like the one the engineers were constructing for the Destiny. However, when she connected them to the project that she and Carl were working on, they would be able to do and access much more. She would need to construct several pairs and order enough material to repair and construct more should the need arise, as it inevitably would, on the migration.

Once the connection had been established between the two devices, Amelia found Kendra in her contacts and initiated a virtual conference. After a moment, the woman’s visage appeared before her.

Kendra Dunifer was a stern woman in her early forties from the UK. She was dressed in an all-white suit and had short, straight, dark auburn hair that framed light-gray eyes. The smile that the woman displayed on the holographic projection was cordial but lacked just too much warmth.

“Good morning, Ms. Dunifer. Thank you for taking the time to speak with me again,” Amelia said in greeting.

“It’s not a problem. How can I be of assistance, Miss Zimmer?” Kendra responded, politely.

“I would like to extend you an invitation to become the Assistant Director of the UNC: Destiny. Your physical and mental assessments have been approved and I believe that you would make the best choice for the position. I will be sending you your contract soon. I have also arranged transportation for you, your son, Jensen Dunifer, and your assistant, Carmela Sorelli, to come here to the USSF: Research and Development Facility in fifteen days,” she informed the older woman.

Amelia could see some of the sternness leaving Kendra’s countenance as it was replaced with surprise and then it transformed into apprehension.

“What about my daughter, Rosie?”

“I am sorry Ms. Dunifer, Rosette Dunifer has been disqualified from joining the migration because she has stage two cervical cancer.”

Amelia could see the woman’s face pale slightly. She apparently had not known.

"How long do I have to decide?” Kendra said, her voice only cracking slightly.

“Okay, then. Thank you for the gracious offer. I will be in touch soon,” Kendra said before her image abruptly disappeared.

Amelia sighed heavily. She needed this woman by her side on the migration. She had chosen her because the woman had been working and then running an orphanage since she had been released from one herself at the age of seventeen. All while putting herself through schooling at the University of Cambridge studying the field of History.

Kendra Dunifer was well versed in the history of this world and would be ideal for helping ensure that the last remnants of humanity avoided the mistakes of the past.

“I am ordering lunch for you and Director Wiess. Would you like for it to be sent up here or to the gardens?”

“The gardens please and make sure there is enough for the girls as well.”

When Olivia had left to order lunch, Amelia brought up the profile of Walter Goggins. He would be her second choice should Kendra refuse the offer. After reviewing his qualifications and the notes she had taken during his interview, she began sifting through all of the top choices for each department head and soon got lost in her work.

“Amelia, are you ready to go?” It was Frank’s voice that came from the doorway this time, interrupting her train of thought.

“Sure,” she said as she closed the files on her visual display and followed him out the door.

“What did Ms. Dunifer say?”

“That she would be in touch.”

“It’s a tough choice she is going to have to make,” Frank said, pressing the button for the lift.

“Can you set up to go speak with Morrison?” Frank asked, changing the subject as they rode down on the lift.

“Already done. We will be leaving on Thursday.”

The lift doors opened a moment later and they headed to collect the girls but when they got to their room, the girls were nowhere to be seen.

“Christine must have picked them up already,” Amelia said.

“I guess we will just meet them at the gardens then,” Frank said, bemused.

Christine rarely came to pick them up. She normally got caught up in her work and ran late to their lunches.

On the lift, as they were on their way to the gardens, Christine got onto the lift with them, and Amelia immediately knew something was very wrong.

“Are you going to get the girls for lunch?” Christine asked as the doors began to slide shut.

“They are not in their room. We thought…” Frank’s words trailed off.

The look of confusion in Frank’s eyes turned quickly to panic. The girls never left their room unless accompanied by Christine, Frank, or herself.

“Order a quiet lockdown with security. No one is to leave the building,” Frank demanded with a hiss as he placed his hand on the emergency override button, stopping the lift with a jolt.

Amelia sent the commands and the three of them headed back to the room where the girls were supposed to have been.

When they got there, a tall man with a bald head stood waiting just outside the door, with his large arms crossed over his considerably muscled chest. He wore silver tech-glasses, styled to look like sunglasses, a pair of pressed, black slacks, and a collared black shirt that read: HEAD OF SECURITY on the front breast pocket.

“Jackson, good. Have you been inside the room yet?” Frank asked the man.

“Not yet, sir,” Jackson replied. “I have Grey and Thompson checking the security feeds of the last twenty-four hours.”

“Very good. Let’s see if we can find anything in here,” Frank said, pushing by the larger man.

Jackson had been working for Frank long before Amelia came to USSF. Frank and Jackson had been part of the same special forces team when they had been in the military, though she knew that Jackson was quite a few years Frank’s junior.

Amelia liked the man; he was exact and meticulous when it came to his job and their jobs matched up perfectly. They took care of Frank. Or at least it used to.

She gave Jackson a nod as she and Christine entered the room in front of him to help them search the girls’ belongings. It did not take long.

“Amelia, Christine,” Frank called out, holding up a white envelope. It had been sitting on top of a stack of drawing that Anna had made. It was addressed to Frank & Christine.

When they had all gathered around, Frank opened the letter carefully and read it aloud.

“Director, Ms. Becker,” Frank began in his deep voice. “As you have no doubt realized, your granddaughter Katie and Ms. Becker’s daughter, Anna, are in my care. They will be returned to you soon and unharmed. Do not involve any outside parties in this dealing. The reason for the temporary change of custody will be apparent in short order. L.K,” he finished.

“What the hell does that mean,” Christine said, snatching the letter from Frank’s hand.

Frank turned to Jackson. “How did anyone get into this room and abduct my granddaughter without being noticed,” he snapped.

“Yes, sir,” Jackson nodded, leaving the room. A few moments later, however, he was back, Katie and Anna in tow.

“Anna,” Christine gasped, rushing past herself and Frank to grab the small red-headed child in a rough embrace.

Amelia noticed before Frank and Christine, that both girls now wore identical chokers around their necks and Katie was holding an old-style mobile device in her hand. Before she could mention the two oddities, the mobile device rang.

Katie looked at the mobile and then at her grandfather before handing it to him. Frank answered it and put it on speaker.

“Director Wiess,” a man’s voice rang out from the device, cutting Frank off. “Before you start making threats, you will notice that both of those girls now wear a modified military-grade interrogation collar. I have personally modified them to not only release 150 volts of electricity on my command, but they will also deliver a lethal dose of Botulinum into their systems should I desire or should anyone attempt to remove them.”

“Who are you and what do you want?” Frank demanded.

“You know well what I want Director. I want to survive. Specifically, by having a place on that fine spaceship you’re building.” the voice said from the speaker. “As for who I am. You will have to wait until the last minute. Can’t have you tracking me down now, can I?”

“I will find out…” Frank began angrily but was cut short as Katie screamed, falling to the ground, body spasming.

“That was a warning Director. NO threats. No Tampering. Just reserve two open seats on Destiny and as soon as we are on board and underway, I will remove those collars from their necks. Understood?”

“Okay,” Frank ground out through teeth clenched in anger and worry.

The mobile device clicked off.

Frank pocketed the phone and knelt down by Katie’s side. The electrical shock had knocked her unconscious.

“One of the security feeds had to have captured someone coming in or out. Find out who is doing this,” Frank said to Jackson as he cradled Katie in his arms.