by Ally Boreets 12 months ago in literature 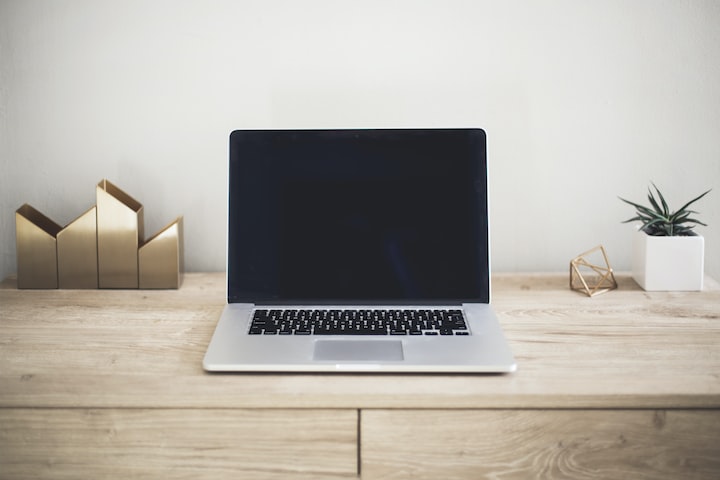 Photo by Kari Shea on Unsplash

The computer is on the desk, exactly where she left it. Blank. Open. Staring shrewdly at the front door. Waiting.

Ally tried to stare defiantly back but falters. It could see right through her. It knew that the deadline was coming up. It knew that she hadn’t started her assignment. It punished her.

She slunk across the messy apartment to the kitchen sink. Out of laziness her kitchen had taken the duties of a bathroom as well as its own.

A pink electric toothbrush lay on its side among the dirty dishes. Trying not to think of the computer, she starts the familiar whirl against her teeth. Allowing her mind to wander for the allocated 2 mins. Begging her mind to come up with some sort of inspiration.

…The internet said that brushing your teeth is weird because it is the only time we wash our skeleton....

…. I can still smell his deodorant on my skin...

...Apparently in dreams, the presence of teeth means you are withholding some sort of information or keeping a secret....

She spat in the kitchen sink, smirking at a conjured image of polished skeletons. Lined up and gleaming on wooden hangers in the secret closet of her mind. She would have some of the most well-maintained skeletons in the world with how often she brushes her teeth each shift.

She peaked ruefully around the kitchen wall to spy on her lounge room. The computer was still there. Relentless. Open. Blank. Reflecting her front door. Staring straight in front of itself with supreme intelligence and judgement.

The deadline was coming up faster and faster and she still had nothing.

No ideas. No inspiration. Just tumble weeds blowing around behind her eyes in a vast and vapid desert.

Why hadn’t she been able to do this sooner? Why was it so difficult for her to sit down and focus on something?

The face of her last job came into her mind. A carpenter in an industrial area. His living space out the back of his workshop. Lonely. They are always lonely. Loneliness is her business.

She sat down in front of the computer. Trying not to look at it directly.

The carpenter’s face comes close to hers in the memory. Her body, confidently pressed against his. Naked and aware of the beautiful boundaries. The independence of sex with no attachments or expectation. The liberation of transactional intimacy. It was her therapy as much as theirs.

Her client’s face morphed into her dad’s.

Brushing away the secrets she kept from her family, she turned her attention to the computer. It was excruciating.

Her dad was so proud of her. As far as he knew, she was trying to get her life back. Taking up a few Uni subjects, even though she had struggled in school.

‘Intelligent but troubled’ the teachers whispered.

You were an idiot to think you could do this. A fucking idiot. The dumbest bitch I know.

She forced her eyes against the palms of her hand. Pressing down hard as though they might pop an idea into her head. Or at least suffocate the voice that slithers up to her ear in moments of doubt.

The student counsellor had warned that returning to school as a mature aged student can come with some ‘teething’ issues. Ally liked that she had used that phrase but had paid no attention.

After all, she had ran haphazardly around the world. She was fearless! Known for terrifying those who loved her and recklessly throwing herself into situations just to see if she survives. She had escaped kidnappings in Vegas. Climbed frost covered cranes in Vancouver. Slipped in and out of darkness in Mexico and escaped the jaws of death in South Africa! But none of that compared to the agonizing rigidness of academia.

Here she was. Full of adventures but no stories.

The phone vibrated. “You have an hour in Ripponlea. Driver will be there in 10 mins”

The guilt became agonizing as she tore herself away from the computer. Quickly washing herself and touching up the make-up that had become smeared around her eyes.

She pulled on a bustier and impractically sexy heels before studying herself in the mirror. A smirk playing on the corner of her lips before she winked at herself.

The computer rolls its eyes at her from the desk.

The street lights slide over the sleek dark car. The computer stays on the desk, all knowing. All seeing. Drawing Ally’s entire focus to it despite her zooming away from it at high speed.

I have nothing! Ok?! WHAT DO YOU WANT FROM ME?! I have no idea what to write about! I am going to have to call tomorrow and apologize for wasting everyone’s time! I’m A BUFFOON! I get it! Ok!? OK!?

She leaned in to kiss him. Letting her perfume waft strategically in his general direction. Then she saw it. Over his shoulder: A computer. Staring at her. Reminding her. Spying on her.

‘Your computer just reminded me of something I am meant to be doing but can’t. Her charming laugh danced over the awkwardness. Calming him.

“And what couldn’t you do, Ally?” He purred at her.

“My homework.” She smiled. “I am meant to be writing a story”

Her professionalism slipped a moment. Like a shawl sliding off her slender shoulder, before quickly being snatched back to its right place.

He moved backwards a fraction at her tone. She noticed and chooses her next words in a tone of velvet.

“I can’t think of anything. What would you write about?”

The computer is on the desk, exactly where she left it.

Read next: Two Can Play That Game