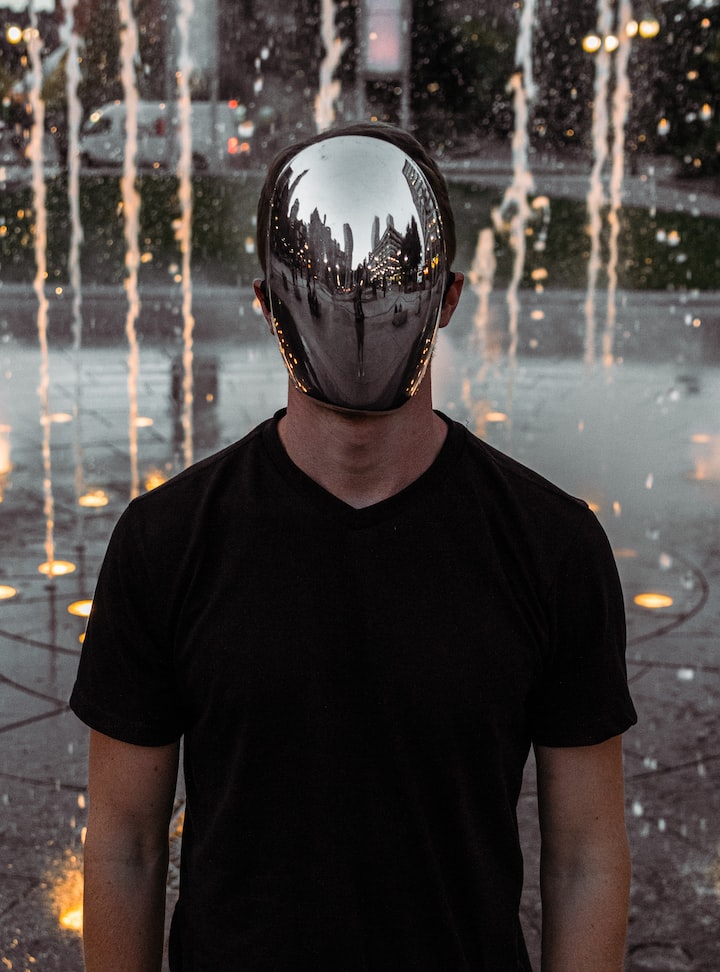 It was a boring, rainy night. I had already eaten, showered, draped a pink

silk robe over my shoulders, and put on a pair of black, lacey, thong panties. I tied the robe around my waist, fluffed up my hair with the towel before brushing it straight, and then headed into the living room. I sat down on my big, green, fluffy sofa, and had found the perfect spot to sit right next to my cat, Chloe. Then, picked up the remote to the TV and started to flip through the channels. Yawning, I stopped on the local news channel. Normally, I hated watching the news, but they were covering a story on The Masked Man that was kind of intriguing.

He was a local rapist famous for raping ten women thus far who preferred young, blonde, co-eds. He always wore a mask and never left any evidence at the scene of the crime. He was in and out very quickly, so they said, and to be on the lookout for him as he was very dangerous. The last woman he raped ended up suffering from bruises and contusions on her body. ‘Wow,’ I thought. ‘This was a mad man.

As I made my way into the bedroom, I looked at myself in the

full-length mirror that was hanging on the back of my door. ‘I was young, blonde, and was attending a college nearby,’ I thought to myself. ‘It fit the bill’ although, I was a very careful, young woman. I was brought up to keep to myself and not to talk to strangers. My mom’s little brother was kidnapped years ago, so our family was always extra cautious of anything happening to us kids.

I’ll admit, my life was boring. I stopped looking at myself in the mirror and called for Chloe who was already on my bed licking herself. I laughed and climbed into bed myself and pulled the covers up over my shoulders and tried to drown out the city noise and fell asleep.

All of the sudden, I was awakened by Chloe, who decided to jump right on top of me and hissed while doing so. I wiped my eyes and looked at the clock. It was 4 am. I uncovered myself and got out of bed wondering where my cat went. I started to walk through my small apartment, starting with the kitchen “Chloe”, I called as I walked around, next to the living room. “Chloe, where are you?” I went on, but I didn’t see her anywhere. I heard the floor creak like someone was right behind me, and quickly turned around, but no one was there.

I continued to walk around looking for Chloe, but I couldn’t find

her and thought that maybe she went back into my room. I was very sleepy, so I walked back to my bedroom. I didn’t see her in there either. I walked inside a bit thinking she might be hiding under the bed, however, I didn’t make it there. Someone grabbed me from behind. I couldn’t see them, but they held their hand over my mouth wearing a thick, black glove, and told me, “Don’t make a sound, or I’ll have to hurt you.” It was a man’s voice, deep and smooth. I nodded, showing the man that I understood.

The man walked me over to the bed and told me to sit down. I obliged. He still had his hand over my mouth, but now I was facing him and could look at him. He wore a mask, so I couldn’t see his face, and he was dressed all in black. He wore black jeans and a black hoody. I would assume he had on a black shirt as well. I could also view his physique. He was tall, stocky, and muscular. He didn’t have any visible tattoos, piercings, or scars. I tried to see his eyes through the mask, but he had finally noticed that I was staring at him and commanded me not to look at him. I started sobbing. Then, it hit me like a whirlwind. ‘This must be The Masked Man,’ I thought to myself.

“Now I’m going to take my hand off your mouth, but if you

scream, I'll have to hurt you. Am I clear?” He spoke with such authority. I nodded, still sobbing. He took his hand away. “Please don’t hurt me,” I begged. “You can have all the money in my purse and there’s some jewelry in…” He stopped me in mid-sentence by pressing his hand over my mouth. “I don’t want your money,” he stated, “I just want you”. He went on to say, “Now, I want you to take that cute little robe off for me,” I whined, but I untied the knot in the belt and then slipped the thin, silky garment off and it hit the floor. I was now almost naked before him with only my little thong left. I could see him staring at me through the mask and it made me feel uncomfortable. “Good Girl,” he stated.

He extended his hand out and urged me to take it. I put my hand in his and he pulled me up from the bed, then turned me over and told me to bend over the bed. He ripped my little thong off and now I was bare naked in front of him. I pushed my face into the bedspread, tears rolling down my face. I knew he was going to rape me, and I tried to think of myself in a different place, anywhere but there with The Masked Man. He slapped my ass cheek hard. It stung when he did it. He slapped it about five times total before he stopped. I could hear him unbuttoning and unzipping his pants. My breathing quickened. This was the part I was dreading the most.

The Masked Man spread open my pussy lips. Then, I could feel

his wet spit sliding down from my ass to my slit. Afterward, I felt something hard sliding up and down the length of me. It was him, and he was already hard and ready to go. The head of his cock wasn’t penetrating me yet. He just wanted to become familiar with the way I felt on the outside at first. So, he took his cock in his left hand and started to stroke his cock on my ass then to my center, and finally on my clit. He was thoroughly enjoying himself and he hadn’t even put it inside of me yet. “I bet you have a nice, tight pussy.” he stated. “Now I’m going to enter you,” he went on to say. I just pushed my head further into the bedspread wanting this to be over as quickly as possible.

He grabbed his throbbing cock and started to tease my little fuckhole with it. Then, all at once, he entered me. I cried out as it hurt badly since I wasn’t properly primed. He seemed to like that it was causing me pain. “Shhh,” he said as he pulled his large, veiny cock out. He put it inside of me again, this time much slower, and settled into a rhythm as he went in and out of my pussy. It was starting to feel good. My breathing became ragged, and I wasn’t shoving myself into the bedspread as much. I lifted my pussy up to meet his cock when he went in and went down towards the bed when he pulled it out. I couldn’t put my finger on it, but something felt familiar about the way he was fucking me.

me. Then, he grabbed my long, blonde hair and forced me up from the bed. He started to pump harder and deeper inside of me. I moaned in pleasure. He gripped at my full breasts as he continued to fuck me, and I could feel his large cock throbbing inside of me. For some reason I couldn’t explain, it felt right to fuck him. It felt natural. He was pleasing me, and I didn’t want him to stop. He was moaning as well. It’s like we fit together perfectly.

After he came, he started to lick his sticky spunk off my ass until I was completely clean. The Masked Man didn’t miss a spot. Then, he told me to lie on the bed with my face down, and count to 100. I started to count, but before I got to 10, he tapped me on the shoulder and said, “Look at me.” I turned around and there standing before me was my boyfriend, Brett. He wasn’t The Masked Man at all. That’s why it felt so familiar.

you some excitement,” he stated. “So how did I do?” I looked up at him and started to laugh. “You big jerk!” I exclaimed. “Why didn’t you tell me it was you?” I went on. He climbed on the bed with me and gave me a big, wet, sloppy kiss. “Well, that would’ve taken all of the fun and excitement out of it,” he said. I agreed. Brett got into bed with me and held me. Then, Chloe joined us as well. It turned out to be a pretty good night, and I realized that I do have excitement in my life. Brett is my excitement. I'm grateful that it was Brett and not The Masked Man.