Mistress Alicia Has a Bad Day

by Lilith Bealove 2 months ago in fiction 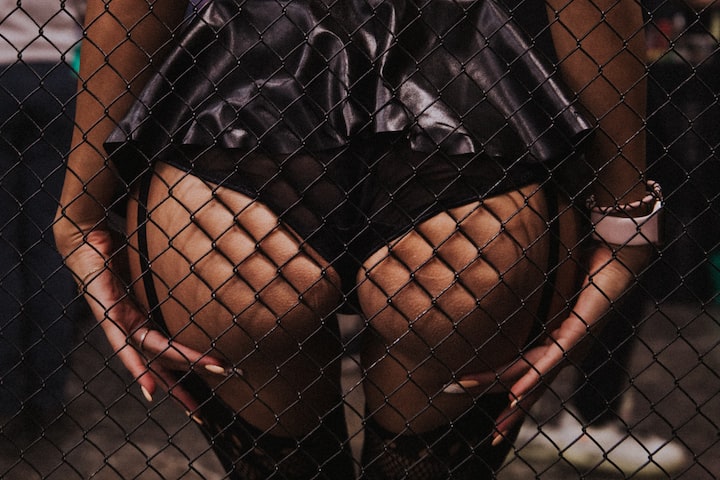 Photo by Klara Kulikova on Unsplash

Eli struggled against the cuffs that had him bound to the wall but soon gave up. It wouldn’t do him any good if Alicia came home to find him out of the restraints anyway.

He was nude and spread eagle against the wall. His wrists and ankles were bound, making it impossible for him to get comfortable. Mistress Alicia had insisted on him remaining in this position until she returned from shopping.

When Eli first met Mistress Alicia, everything was quite vanilla, he had no idea that she had such a sadistic side to her. Or that he would enjoy it so much! Since the beginning of their arrangement, which started out as a simple “friends with benefits” ordeal, Eli and Alicia’s relationship bloomed into something neither one saw coming!

In the earlier days, she had just used him as a booty call, she’d laugh as she would say “I only want you for your body.” The sex was good enough that he didn’t mind. In the past couple of months, it had evolved from vanilla, to slightly kinky, to him being chained up in her bedroom while she went shopping.

Eli had started to drift off when a noise caught his attention. The front door was being unlocked. He straightened up and made himself appear awake and waiting for her. He heard her set down the bags, put up her purse and keys, and finally her footsteps heading towards the bedroom.

She had paused just outside the door, where she kept a chest of whips and paddles. When she entered the room, Eli could sense an air of frustration, and she had her favorite Tantus Thwack paddle. This was the only paddle he hated.

The Thwack is thick and heavy. It hits a wide area and leaves a good mark with minimal effort on Alicia’s end. It seemed like she wasn’t going to go easy on him, though.

“Bath and Body Works was out of my lotion. And the waitress messed up my order. Today was not as fun as I had hoped,” her voice had a whine to it, her lips settled into a pout. Eli remained quiet, knowing that if he spoke, it’d be worse for him.

Alicia undid Eli’s restraints and led him over to the chaise she kept in the corner of the room. She sat on the edge of it and instructed Eli to bend over her knees. He obliged, and as soon as he was in place, the paddle came down over his ass.

A loud thud met his ears as the sting from the paddle warmed his ass. Almost immediately, his cock started to swell. He couldn’t help it. Another thwack from the paddle met his ass, and he had to bite his lip to hold back a whimper.

After the third smack, Alicia told him to count out loud. He had reached 17 when she stopped. His cheeks stung with an angry fire as he stood up from her knees, his cock was throbbing.

She leaned back in the chaise and closed her eyes. Almost absently, she reached up and stroked Eli’s cock. Without realizing it, he closed his eyes and leaned into her touch, a whimper sitting just on his tongue.

Alicia felt him relax, and her eyes flew open. Without warning, she smacked his cock, causing him to jump, and a gasp fall from his mouth.

“N-no, ma’am-Mistress,” Eli managed to stutter out before she smacked his dick again.

“To the bed,” she demanded, each word spit out as if it were bitter. Eli quickly obeyed, kneeling before the bed, knowing what was to come.

Alicia stood before him, and he removed her clothes with just his teeth and lips. When she was fully naked, she sat on the bed in front of him and spread her legs. Eli quickly buried his face between her thighs, his tongue lapping out to lick her labia and clit.

She ran her fingers through his hair, pushing his face deeper into her pussy. The more she pushed, the more eager his licks became. Soon he was sucking on her lips. His tongue dashing out to flick against her clit.

She was moaning, and her thighs were starting to tighten around his ears. Her fingers had left his hair, and were now clutching the covers of her bed. Eli took her clit between his lips and gently sucked until she reached orgasm.

Despite this being his least favorite act, he showed eagerness and sucked her cock as if it were real. She tired of it quickly, though, and firmly grabbed him by his hair. Then she fucked his face with her cock until she grew bored of that too.

I'm a #bisexual #polyamorous #writer. I cover #relationships, #sex, #sextoys, #dating, #lifestyle, and #books with a touch of #erotica.

If you want to know more about me, check out this article: https://vocal.media/filthy/meet-the-author

See all posts by Lilith Bealove →