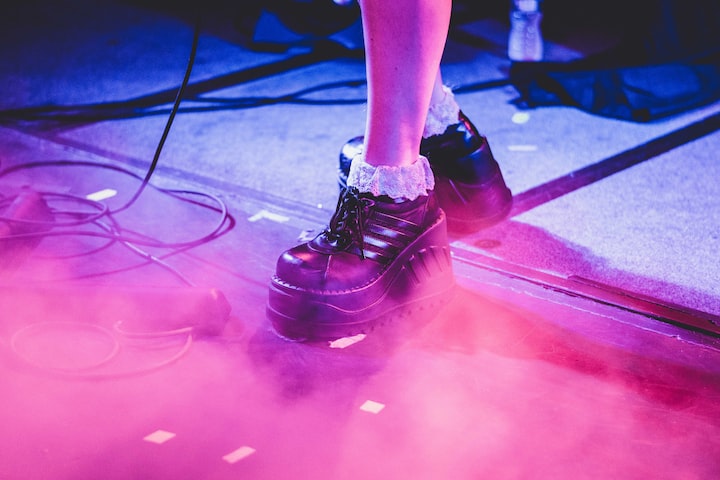 Photo by Robbie Noble on Unsplash

Kay was positively THE most beautiful woman I had the pleasure of laying eyes upon. Waist long purple hair framed a pallid angelic face. Eyes like dark flames were accentuated by elegant high cheek bones, and strategically placed piercings highlighted sensuous lips. Curling black tattoos covered her graceful arms and her legs seemed to stretch on for an eternity. She only ever wore clothes that showed off her features, her tucked in waist, curvy hips, and her breasts. There was always just enough fishnet clad legs and bare back revealed to drive those of us who appreciated her looks crazy with lust. What she was doing in the hell-hole that was our city's only Goth club was beyond me. Sometimes I felt maybe she was thinking the same thing as her face was permanently frozen in a look of disclaim. Understandable in the midst of a crowd that sneered at others and a cloud of bitchiness and superiority complexes hovered over those in the dingy room.

As much as I despised the club, (and I really did), it was utterly unthinkable that I wouldn't be there every Friday night. Family occasions and plans with friends alike were forsaken, sickness was feigned and relationships ruined by my absence. All for the sight of Kay whipping her plaited hair and twisting her body to the mechanical beat of Nine Inch Nails, the lilting tones of Souxsie And The Banshees, the murky melodies of The Sisters Of Mercy - it never mattered to me what was playing as she simply looked exquisite dancing to them all. Sometimes I would venture up to the dance floor and try to get near her, try to work up the courage to speak to her, but no amount of Vodka would give me the courage. Perhaps I thought if the crowds shifted I might end up near her or if my fantasy came through with her.

Sometimes Kay arrived at the club alone, sometimes accompanied by lovers, or at least those who wanted to be her lovers. She always made time for the younger ones who wanted to be just like her unlike the others who mocked them. However on the night I uttered my first words to her, she came alone. She arrived later than usual, I was already on my fifth Vodka. She walked right up to the DJ booth and requested Bauhaus' 'Hollow Hills'. I walked right up to the dance floor and placed myself in front of her, moving my body to a song I always associated with tears, wine, and blood. Our eyes met and driven by some undefinable force, we moved towards each other, moving as one. When the last bars of the song faded out, she put her arms around me and said, "Thank you Amy, I needed that'. My name! She knew my name! I couldn't let it end there. "Drink" I spluttered as she looked at me quizzically. "Would you like a drink?" I asked regaining my composure and she nodded in acquiescence before moving over to an empty booth. I ordered two Vodkas and floated over to the table.

We talked for hours, at first about trivial things like books and music, but then delved into more personal topics, deep details on heartbreak and loss. Kay was rambling and expansive, but throughout the fog the message was clear - this girl had real pain in her life, not the small scale sufferers who blew things out of proportion wanting a badge of cool they thought came with being fucked up. Right there and then I wanted to be inside her, to travel in her veins, to have her heartbeat sync with mine, to feel every pulse and lower into every muscle, to have her feel I was with her, let some light into her dark mind. Something told me not to press on the big issues and instead I reached across and gently stroked her face and wiped away the tears, an act of warmth and compassion swept away what was once pure lust.

It was clear that by 3am when the club was closing that Kay would be coming home with me. I never expected sex, her company was more than enough. When we arrived at my lonely flat I made some pasta and opened a bottle of wine while we talked more. Several times I caught her stealing furtive glances at me but thought nothing of it. Never before had I felt such a warm affinity or closeness with anyone, it was as if we grew up together, played as children, even as though we were in the womb together. And just as I was pondering this, Kay leaned across and kissed me. Somehow we found our way to the bedroom and again our bodies were as one, liquid, eternally flowing, soul kissing. And Then, and then, and then…

Afterwards as she lay sleeping I couldn’t help but watch her, sipping the end of the wine. The perfection of her body made me want to cry. How could such pain be buried within a body so beautiful? Her milky skin was so soft compared to my own which was scarred and broken. Again I felt the overwhelming urge to be inside her, to understand, to actually physically see her through all the darkness. A surge of jealousy gripped me, jealous of my own tongue and fingers! I lay back on the bed and traced the circumstances that led to this moment. I smiled in reflection of my desire, my complete inability to speak to her, feeling I wasn’t even on her radar. And then I smiled at these strange feelings, that’s what life is all about I suppose - a series of strange feelings and unimaginable joys and sorrows . Only now they were bearable and all because of her. I drifted into a blissful sleep, soothed by the deep breaths the angel beside me was taking. HOME I thought, THIS IS WHAT HOME FEELS LIKE.

The sunlight drifted through my grotty red curtains, rousing me from my slumber. I smiled in the memory of the night before and turned to my side to breathe her name, to plant a kiss on the lips that relieved me from the coma I’d been in for twenty-two years. A sense of panic sunk its vicious teeth into my heart and I shot up in the bed. She was gone. I beat my pillow in frustration as floods of tears pumped from my eyes. She was gone. I sank the glass of wine she had abandoned in one gulp. She was gone, gone, gone. With this somber and soul destroying thought, I reached for the blade concealed under my mattress. And so the night I had only ever dreamed about before ended as it began - tears, wine and blood.

Receive stories by Liz Wall in your feed
Liz Wall
Read next: Best Tantric Sex Tips That Anyone Can Try