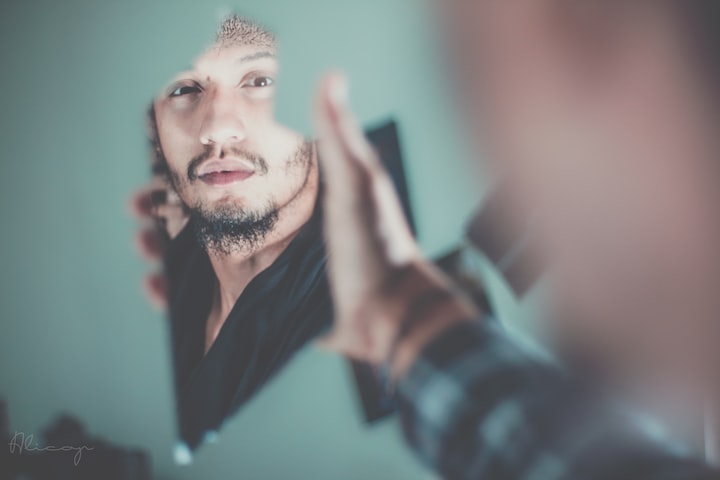 Photo by Fares Hamouche on Unsplash

It was mid-summer. Gina was getting her packing her bags to go on her vacation with a group of her friend. Her mother had already said her goodbyes. Due to her having to work at night. She wouldn't be able to see her off in the morning. Taking her shower Gina was going to go to bed a tad early. Thirty minutes into her sleep she was awakened by a groan. It sounded like a wild bear that was going through their garbage.

The groan fit the sound they were close to the forest. Closing her eyes is when she heard it once again.This time it sound like it was inside the house. Sitting up in her bed she slipped on her slippers and made her way down the hallway. She was darn if she was going to be lunch for a bear.She continued walking till she saw light in the hallway.How did she forget her stepfather was home? She quickly ran into the room.

“Dad there is a…” she paused as she looked at him.

His eyes wide filled with shock. The sheets wrinkled tightly at his crotch. His pants down and face red of embarrassment. On the television played a adult film. The volume low so no one could hear the moans and groan of the two having sex.

“What are you doing? She asked him.

“It's not what it seems. I was undressing, and you came in.” He spoke to her as she watched him.

Not wanting her to tell his wife about his late night session. He quickly crawled over the bed and placed his hand around her throat. Being taken by surprised. Gina did what she thought was her only option. Sending her elbow into his gut. Hearing a groan but the grip on her neck getting tighter.

“Help, help!!” She screamed as loud as she could. Her nails clawed at his arm.

“You're not telling anyone. Want to know why? I will kill you before those words slip your mouth. Why can't you be like the other, good teenagers hmm?? Pleasure daddy on the low as their mother works. Keep me happy dammit.” He growled against her ear. He noticed that Gina was turning purple and had blacked out.

Letting her fall onto the bed. He dropped the sheets and looked his step daughter over. A grin came over his face as he closed the bedroom door and locked it. This was the day he waited for. Leaning over her body. He began to lift her nightgown. Seeing that she was wearing those laced panties he loved so much. It brought joy to his heart. Yet he had to get everything ready. He walked towards the closet and pulled out a black box.

“I bought you a present the day I saw you.” He spoke as he opened the box. “I knew that you would be mine, but it was going to take a lot of work. I had to date your worn-out mother. Fuck her a few times. Tell her I love her. Then deal with your tantrums all cause I wasn't your father.” He grinned as he pulled out a collar that had “Daddy’s Little girl” on it.

He gently lifted her head before locking it in place. “Ah one more thing.” He smiled and grabbed a cup of water from the bedside dresser. Placing a drop of some liquid in the water and stirred it up.

“Come on wake up.” He spoke as he slapped her cheek some. Seeing her stir some. He lifted her up to him by the collar around her neck. “Who said I was done with you, Gina? Come on drink it up.”

Coughing sounds filled the room before her eyes could focus on him as she drank the water.

“What are you doing?” She asked in a still dazed state.

“We are going to have fun Gina.” He smiled as he knelt down towards her. “Ready?”He asked.

“Ready for what?” She asked as she noticed he was standing right in front of her.His cock standing at full attention. She turned her head from him. “I am not doing that. You're a freak!”She screamed.

“Oh yes, you will.” He spoke as his hands turned her head back to his cock. Open your mouth before I have it forced open. Now let's make the night fun." he taunted

In fact, he had a hard time keeping her head still. He could feel his cock brushing against her nose and her lips. He could feel her trying to pull back when his ten inch cock made its entrance. A soft groan left his lips. "Oh yes ." he groaned as he slowly moved hips back and forth against her face.

Gina couldn't believe this was happening to her. Tasting the sweat that coated his cock and smelled the musk from the day's sweat. Watching his hips thrust into her face as his cock thrust passed her teeth and tongue into her throat. Often she couldn't breathe as her hands pounded against his thighs. Choking from the repeated invasion of his cock. Her saliva drooled down the corners of her mouth and down her chin.

He could feel her throat closing around his cock. Oh that feeling was amazing. He felt like he could do this all night. He had died and went to heaven. His hip thruster faster as he looked down at her. Seeing his thick hard glistening cock thrust in and out of her mouth.

She coughed and coughs before catching her breath. Crawling away from him on the bed. She was glad he was done with her. She eased to the far corner of the bed. She watched him as he panted in pure bliss. She stood up and made her way to the door before she felt a tightening around her neck.

"I'm going to…" He spoke as he pulled her back to him by the collar on her neck.

Stumbling back towards him is where her lips met his. Her eyes filled with shock as he placed her hand to his still harden cock. How was he still so hard? She could feel his tongue parting her lips and sinking into her mouth caressing her tongue. She whimpered against his lips as her hand pressed against his chest. He pushed himself onto her till her small frame fell onto the bed.

Her back arched up off the bed when his fingers thrust inside her. Her lips parted as his lips covered hers. Keeping her silent as his fingers moved in and out of her pussy. She could feel herself slowly beginning to betray her. Her form tensing up with each thrust. Her squirming under him.

He knew she was feeling the pleasure of Daddy playing with her sweet little pussy. He continued to French kiss those soft pink lips. Feeling her wetness around his fingers as she pulled them free.

“That's my girl. Now let's play.” He smiled placing her arms above her head tieing them to the bedpost. He laid between her legs looking at her glistening pussy lips. He let his tongue caress those folds. Slowly up and down tasting her nectar. He parted her legs slipping his head between her legs. Looking up at her his tongue swirled around her clit. Watching her breast heave up in the air, each time, his tongue swirled around her sensitive button. Looking at her pink nipples pointed in the air. She was turned on for him. For daddy. This drove him wild.

His tongue ventured deep inside her pussy. It was like a fountain of honey how wet she was becoming. His own hand stroked his cock imagining himself fucking her at the pace of his tongue.

Gina’s hips swirled against his mouth as her eyes met his. She could see the pleasure he was getting from eating her pussy. Her body liked it as well. Each lick moan and suck of his lips was slowly driving her mad. She couldn't take this as she tried to pull her hips away. Only to have his arms lock her in position. Her fingers gripping the bed post as her pants filled the room.

He knew she was about to climax. He watched as her head tilted back on the bed. Faster and faster his tongue moved inside her till a scream filled the room. Quickly he moved to cover her mouth. Seeing her eyes rolled back of her head. He knew she fought this moment, but the body always win.

“She shh even though I love knowing I can make you scream. Don't need the neighbors coming over.” He grinned before sitting up on his knees on the bed. “Now to make you all mine.” He spoke as he lined up his hard cock along her pussy. With one good thrust. Half of his thick cock was inside her. He shuddered before leaning down kissing her deeply. His thrust starting slow and hard.

She groaned against his lips as he continued to thrust inside her. Her stepfather was different in bed. He knew just how to work her sweet little pussy and the words that made her body obey him. What was wrong with her fucking him. He wasn't her blood father. Slowly her lips melted against his. Letting her tongue caress his. Her hip moving with his.

He was shocked when he felt her hips moving with his. That she was kissing him back. He grinned the night went as planned. He took her breast into his mouth through her gown. His thrusting becoming more determined.

“Oh god daddy.” She whispered out as the bed creaked under the pressure of a father fucking his daughter.

“Mm yes my princess. Enjoy daddy's cock." He whispered out as the bed creaked under the pressure of a father fucking his daughter. Looking to her bouncing breast. He stopped and swirled his hips making his cock hit her g spot.

Her eyes rolled back feeling his cock pushing against her spot. Her toes curled as her walls tighten around his cock.

Having both came for the second time. They both were tired. Undoing her wrist from the bed. He carried her to bed butt naked. Gina had no problem sleeping after being fucked like that.

Next morning Gina woke up to see her mother had made it home. She walked towards the room. She was going to tell her mother. Her stepfather was a creep. Only to catch her stepfather looking at her motioning her to the bathroom. Looking back at her sleeping mother and him.

She walked toward the bathroom only to be yanked inside. He wasted no time lifting her dress and pushing her panties aside and thrust inside her.

“No one is to know Gina of last night. How you moaned for me. Be a good girl and keep me happy. He stood there proudly awaiting the day she returns to make those words more of a reality.

That was it he had her again. Her lips melted into his as her father fucked her once again in their bathroom.

Walking out to join her friends. Gina looked back to her stepfather and waved. “Love you mom and love you dad. Going to miss you.

”He moaned feeling her walls tighten once more only awoke the beast in him.

Erotica is a Pandora's box that I am willing to explore.

More stories from Lady Allen St Jovephine and writers in Filthy and other communities.