Trouble on the Water

All Hands On Deck 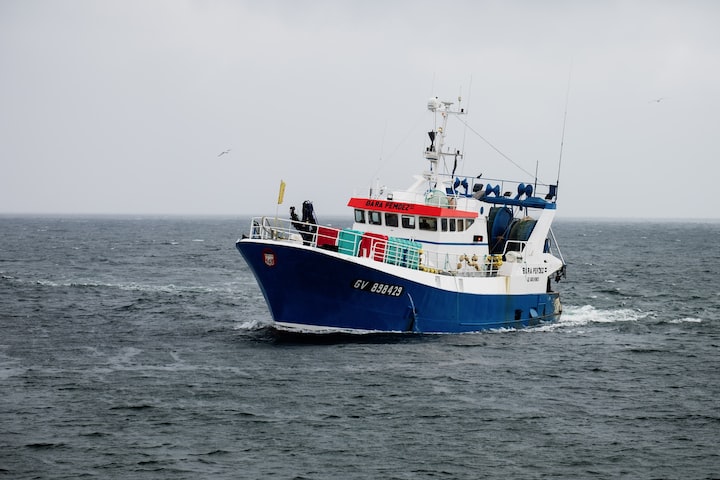 Photo by Thomas Millot on Unsplash

Cold spray crashed against the windows of the small fishing boat as she pierced the crest of a wave and then pitched down into the trough. Time and time again the unforgiving cycle had gone on battering the boat and soaking the three-man crew to the skin.

The crew were tied to the ship with safety lines and already in their life jackets, but they all knew that a life jacket was little match for a 20-foot wave.

Captain Floyd Oram checked the compass and maps again, praying to whoever would listen that they were close to land. They had been blown off course long ago and were in unfamiliar waters.

“A lighthouse…how in the blue hell am I supposed to see a lighthouse in this mess? Boys! Look for a light!” he called out, seeing one charted on his maps.

The crew scanned the horizon each time the boat pitched up and after several tense minutes had passed, the muffled sound of a foghorn cut through the storm. Following the sound, first mate Tom saw a pin prick of light in the distance.

Captain Oram looked, squinting through the night and the storm. “It’ll take a lot more than that to get us to shore!

The minutes that followed were filled with nothing but radio static and a fear that was colder than the North Atlantic. It was the fear of being alone on unfamiliar, rough water with his men and their families depending on him to make it home in one piece. Just as he was about to give up hope, a reply crackled over the line.

With a sigh of relief, Floyd turned the wheel to starboard and soon found the lights of the Elsie Marie through a hole the wind tore in the fog.

“Would’a never a known she was there…” he muttered, running a calloused hand over his face. Relief started to ease the grip fear had on him, but he knew they were not safe until they reached shore.

Tom Adair and Dave Gallant both gave him a thumbs up when they heard Floyd’s voice come over the boat’s loudspeaker. Tom secured the last lobster trap and they both scurried below.

For over an hour, Floyd fought to keep the lights of the Elsie Marie in sight. Each dip of a wave came with the fear of looking back up to see the lights were gone. But they were always there, a steady comfort that they were not alone and would make it to shore. Floyd wouldn’t allow any other outcome.

At long last, the tiny port of Alma came into view.

The waves continuously pushed the boats against the wharf, making the danger of being crushed a real one as they struggled to tie off.

Tom cursed as he dropped a rope from cold chapped hands and snatched it back up. Eventually, they succeeded and with a yawn and a wave to Floyd, Tom and Dave headed below for a hard-earned rest. Both men knew they would be on their way home as soon as the storm was over and wanted as must sleep as they could manage.

Floyd was still up and around in his salt-stiffened clothes. It was his duty, he felt, as the captain of the Astrid to go thank the captain of the Elsie Marie before he could turn in for the night. Walking bent over into the driving wind and rain, he called out to the crew.

“Hello there! Which one a ya’s is the captain?”

An older man with a scar on his nose and a thick white beard stepped up onto the wharf.

“Ya saved our hides out there, no doubt.” Floyd grinned, keeping his back to the storm.

“Reckon so, but we’re safe now. Nothin’ to do now ‘till she blows herself out.”

Knowing that the captain and his crew were doubtlessly as tired as he was, Floyd nodded and went back to the Astrid for what was left of the night.

The next day, there was nothing but sun once the early fog burnt off the water. Floyd, Tom, and Dave decided to go and thank Captain Marr and his crew with the traditional gift of fishermen — a case of cold beer.

When they got to the spot the Elsie Marie had docked at the night before, they were not too surprised to find it empty — fishing was a hard way to make a living.

“Maybe we kin find them on the water,” Dave suggested as they walked back to the Astrid.

Floyd nodded. “You two get ready to leave. I’ll check with the harbour master to see if he knows where they went.”

The harbour master’s office was small and cluttered with maps and charts. The leather-faced man looked up from a map and nodded in greeting when Floyd walked in.

“Mornin’, I was wonderin’ if ya could tell me where to find the crew a the Elsie Marie. Do ya know where I can find them?”

“Morning. Go out to the road, turn left, walk to the edge of town and you’ll find them in the inlet there.”

At the inlet he found no boat where there should have been one.

He shrugged and figured they were already fishing somewhere. Tom had been right in his assessment of the fisherman’s life.

As he turned to leave, the morning sun glinting off the local fishermen’s memorial statue caught his eye. It was the wheel of an old boat set on a block of local granite. On one side was a long list of names with dates going back to the 1830s.

Floyd inspected the monument and reflected on how glad he was that his and his crew’s names were not on a similar stone at home, thanks to Captain Marr and his crew.

A familiar name jumped out at him and he quickly read the inscription.

In memory of the brave crew of the Elsie Marie. Lost at sea when they went to the aid of a boat in distress on September 23, 1946.

‘Huh.’ Floyd thought. ‘We must a been helped by the Elsie Marie II or something.’ Maybe a relative a one a these guys.’ After all, it was not uncommon for families in those parts to pass down boat names in honour of the generations that came before them.

Taking a closer look at that side of the memorial, he noticed photos of the four-man crew from the Elsie Marie. Goosebumps broke out all over his body despite the heat of the sun on his skin.

There was Captain Marr, scar, beard, and all.

Standing there in mute disbelief, he took in the other photos and names.

Floyd returned to the Astrid on shaky legs, recalling every ghost story his father had ever told him when he was a boy. He certainly owed the old man an apology for laughing at him, which he would give as soon as he got home.

He sank heavily into his captain’s chair in the wheelhouse while Tom and Dave gaped at the state he was in.

“Ya look like ya seen a ghost!” Tom quipped, wondering what could have shaken their usually steady captain.

Floyd grumbled, unwilling to tell them what he had learned until he came to grips with it himself. “Don’t just stand there gogglin’, let’s get home — or do ya want to spend another night below instead of with yer wives?”

They jumped into action and soon were out on open water. When they reached the spot they had met up with the Elsie Marie the night before Dave spotted a ship on the horizon and popped into the wheelhouse to tell Floyd.

“Why not?” asked Tom, joining them from below.

Before Floyd could answer, the radio crackled, and the voice of Captain Marr came through faintly as if from a great distance.

“Safe sailing ahead, lads. Say a prayer for us down here.”

The radio gave a burst of static and fell silent.

“Down here? What did he mean?” Dave questioned, a frown creasing his brow.

Tom, as superstitious a fisherman as they came, connected Floyd’s shaky state with the message and looked at the sea chart on the table. “There’s an old wreck marked on here — almost right below us, must be down some deep.”

He turned to look at Floyd, a heavy brow arched in question.

Floyd sighed heavily as he piloted the boat toward home.