Trees of Life and Death

The Unquenchable Thirst for Knowledge 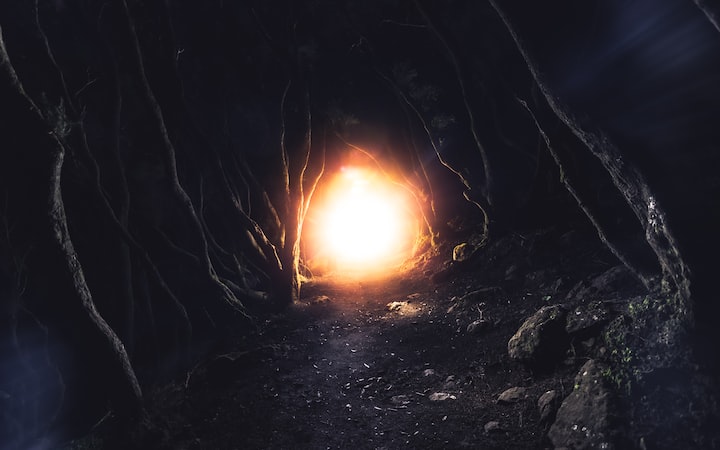 The outside world was unknown to her, but she could see a glimpse of it through the window in his room. Ivy and greenery encased the compound, and the sun’s rays looked magical as it shone against the glass.

“Someday you’ll be the death of me.” she whispered aloud.

“Are you talking to the window or to me?” he inquired.

“Both: you know it is illegal to have a window that looks outside. If anyone ever finds out we’ll both be dead.”

“Yet, I’m fairly certain the only reason you visit me is because of my window.” he chuckled.

Henry had been careful not to disturb anything noteworthy in his placing of the window. He tediously removed all the circuitry within the wall’s contents in a painstaking manner. The tools he utilized were of intricate size as to not open the compound’s walls to the outside world. Although he longed to explore it, he wanted to establish more concrete evidence within his research. Opening up a portal into another world could drastically change the livelihood of the compound’s residence; this he knew. He placed a pane of glass in a way easy enough to conceal when necessary, and thick enough not to compromise the structure’s seal and integrity.

“You said if anyone ever finds out we’ll both be dead; therefore, I’m not including you into those risks. Besides, beyond my window you never veer from the rules. You follow the rules so spectacularly, I’m sure the guards and councilmen are happy you look after me. You have to make up for my incompetence, after all.” he winked.

She sighed, “In genius there remains idiocy.”

She stared at the rare artifacts he stored in his room; Edison bulbs, Fitzroy storm glasses, and Galileo thermometers. It was true that through him she was able to follow her historical and botanical studies. He had acquired a variety of glass and metal tools and objects; most had been outdated or deemed unnecessary for modern life. Most things were electronic now; even book knowledge could be pulsed into your brain and sorted accordingly through manufactured electromagnetic waves. Still, something about this boy’s primitive learning techniques tickled a part of her brain that no other substance had been able to reach. His risks had been her reward, and the councilmen were none the wiser. As long as what was done in secret could stay secret, she didn’t ask questions. She didn’t want to acknowledge the fear within her own heart; the fear that insisted she stay in partial ignorance. She held a dichotomy of desire for knowledge and desire for innocence simultaneously. She longed to be involved while staying uninvolved. In short, she was a coward.

Still, Henry didn’t seem to mind. Everything she lacked in courage, it seemed he made up for. He had a secret room full of secret inventions and innovations. His plan was this: a way out, a way to discover, a way to seek and find. His thirst for knowledge was unquenchable. He had often told her that she filled the gaps in his logic. Every inventor needs an element of caution, and a way to see the harm in what could be created as good. He needed such critical thinking and negativity. As intelligent as he was, he remained primarily simple minded. She both hated and loved that in him.

Henry’s family longed for the two to be betrothed. She wondered if Henry longed for that too or if he would always be married to his own maddening genius. She thought he made attempts to flirt with her on occasion, but never could decide as to whether she wanted his advances or not. Her parents knew him to be an unsophisticated scoundrel. While his parents longed for her presence to bring him up, her parents feared that his would only bring her down. She had a bright and promising future; the highest scores and ranks in her schooling. The council sought for her to one day join their ranks as the elite, and her parents longed for nothing more than that chance. In their view, only one thing was standing in her way; Henry.

Henry had been assigned an officer once or twice already in his young age. Only through excellent behavior, test scoring, mental evaluation, and much pleading and promise from those around him was Henry able to be an independent individual again. Henry, however, had created memory blocking substances foreign to his time. In truth, his behavior, scoring, and evaluation results were mere illusion. He sought and relied on old techniques and practices to make himself appear untraceable. She thought he would take to the outside world well, if only given the chance. They’d seen movies of space pirates and rogues a few times raging against the empire, but that sort of thing didn’t happen here. It was too dangerous to happen here. Still, somehow she felt Henry would more than fit that role. He was most certainly a hazard to himself.

While she was entranced in her thoughts, and Henry fixed on his latest venture, a knock came at the door. The knock was one of authority, and Henry wished to hide her elsewhere for her protection. He had made for himself a little box above that window; one that could easily be hidden and pulled with ease. He quickly thrust her inside of it as he scrambled to stow away his forbidden goods. In his rush, he had forgotten one thing: the window.

As the guards caught on to his scheme, they noticed the atrocity staring back at them. Captivated for a brief moment, horror and awe struck their faces. One approached the window, ready to arrest Henry for this abomination. The guard had just called out an order to seal up the window when something hit him from above. She had found the courage to make a stand against the current counsel regime; if only for the window and the genius guilty of installing it.

What she hadn’t counted on was the guard on the floor holding his throat, and struggling to breath. She felt compassion for him when she turned to the guards still at the door’s entryway. They were doing the same. In her haste, she had noticed only the adrenaline pumping through her veins. She turned to look at where Henry stood, holding a ghoulish looking mask to his face. His speech was muffled as he rushed to hand her a similar mask.

She now noticed her own labored breathing, and as Henry motioned his hand toward the window she realized why. Tufts of green, yellow, and brown blew in as if frayed cotton fibers around the room. It was somehow beautiful, yet deadly. For how long had humans remained inside; in a controlled environment never to be disturbed by the truest forms of nature?

“Our compound has been removed long enough that a meager wisp of pollen could wreak havoc on your lungs! This window wasn’t ready to be opened! Quick, help me seal the vents!” Henry shouted.

As she had opened the trap door to knock out the guard, the guard’s weaponry had crashed into the glass window pane. Their compound was sealed away no more. Now, they were all at risk of the outside world’s inhabitants; plants. The pollen and spores that these organisms produced was no match for mankind’s new state. The plants within the labs and gardens inside the compound were of totally different structure and nature; cloned or cultivated by human hands. No wildness remained in them, and soon they would be overtaken by those that were once only outside. The plants left untended outside the compound's walls only grew stronger and bolder. Human bodies were no longer resistant as in days of old, and what was once natural became a toxic poison.

Surely, this was her greatest botany lesson of all. As she looked aghast in awe and wonder, she choked and inhaled a deep breath. Henry cried, “No!” with all of his might, and it was the last thing she heard as she drifted into oblivion. Yes, he would be the death of her; him and that window, but this she realized was also her own doing.