Today, was no ordinary day.

by Victoria Rivera 3 months ago in Sci Fi

A dystopian story created from my imagination, as I listened to an instrumental song. "Enneagram 5" By Sleeping at Last. 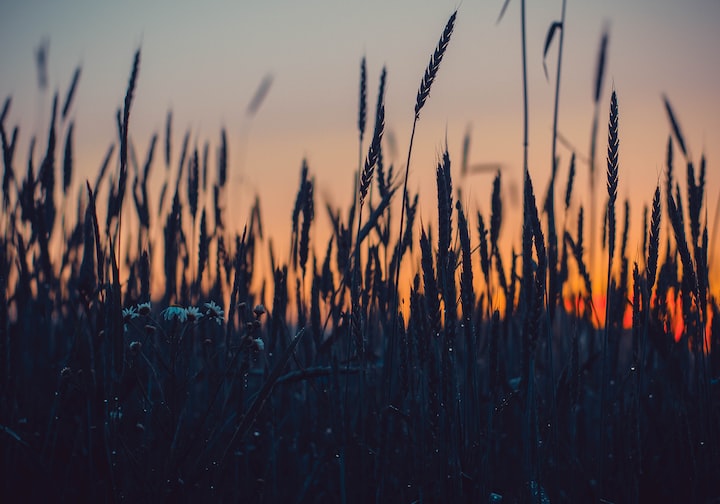 Photo by Irina Iriser on Unsplash

I woke up to the sun shining through the window, just as I do every day. I am not sure what day, month, or year it is, but I know I am alive, and I am alone.

But today was different.

I looked out the window to see a few dark clouds in the distance. I was running low on water, so I happily welcomed any rain. I got dressed, boiled my water, and brewed my - probably expired - coffee, enjoying small bites of homemade crackers, and eating a single egg. This is how I have survived all these years; in the beginning, I found and hoarded any and all ingredients and supplies. Using them just enough to keep my head afloat, but knowing that eventually, I would still run out. Even with everything working against me, I have managed to keep chickens alive, taking some eggs for food while allowing others to hatch and grow.

I harvest wheat, tomatoes, corn, and some kind of leafy vegetable, but I can’t take all the credit, the crops were already here when I found this vacant farm. It’s large and takes a lot of effort to maintain, it started out with much more variety but some things are harder to sustain. The old barn used to have cows, but there was no bull, so without offspring or milk, I did what I had to to survive. Now I use the barn to stash away whatever I can, occasionally taking naps when I get tired but don't want to return to the house just yet. The hens have produced enough roosters that the population stays high, and I can occasionally have more protein. I know more than two years have passed, but halfway through the third, I stopped counting.

I went outside to feed the chickens and tend to the crops, just as I do every day, but today, today I saw a light.

As I bent down to pull some weeds a light flashed across the sky, I never saw it touch the ground, yet from afar I could see a small blue glimmer bouncing across the fields. Desperate for something else to exist, something other than myself and the chickens, I walked towards the light. Increasing my pace slightly as the light became brighter. I started to run when I saw the blue ball bouncing closer and closer. I ran until the light was no longer blue and round, but a bright white light skipping along with the flowers, flowers I never knew existed.

The last time I ventured off of the farm, almost everything was dead, the vegetation was scavenged, the animals left for a better home, I told myself this was a miracle. A miracle that birds were flying over me, a miracle that small rodents were jumping through the grass, creatures I thought had all left this land had finally returned. I stopped and fell to my knees, crying at the thought of shooing these creatures away all those years ago, hoarding the crops for myself and my animals, I didn’t realize they’d never come back.

I looked up and through the tears, I saw the light was now closer, smaller, and not actually a light. It was a girl, she looked younger than me but no younger than 17. She danced in the fields with a bright wave of energy flowing around her, the animals seeming to dance with her.

She saw me on the ground and ran out to me, reaching her hand for mine. Without thinking I grabbed it, and she pulled me to my feet. I hadn’t had a real shower in years, my hair was down to my lower back, matted and frizzy, my overalls dirty and loose, I hadn’t seen another human for at least 6 months longer than I had been at this farm. Yet, here she was, bright-eyed, clean skin, a blindingly white dress, and with hair that flowed in the wind, her blonde waves glimmering in the sun.

Before I even had a second to think, we were running. She held onto my hand tightly, weaving through the grass, sprinting downhill until the sound of rushing water filled my ears. She pulled me towards a clear river, sparkling under the sun with trees lining the sides, and deer and foxes taking sips from the clean water. The only water I had at the farm came from a pond and the rain, and most of it went to the chickens and crops.

It took all my energy to believe that this was real, to think that had I just looked a little further there would be something more out there. The girl cupped her hands in the water and motioned for me to drink. I mimicked her movements and felt the coolness reach the back of my throat, tasting the crispness of clean running water. Realizing this wasn’t a dream, I threw myself into the river. The girl laughed as I swam through the water, taking big gulps as I watched the girl run around to the trees and bushes that covered the land.

She came over to the side of the river and laid out a pile of fruit. Apples, oranges, bananas, blueberries, fruits I didn’t even think grew in the same areas. I quickly stumbled out of the river and ate it all, she laughed again as the juices spilled over my chin, but her giggles quickly stopped as another beam of light flew overhead. She watched the beam fall and turned to look at me. She waited for me to finish eating before squeezing my hands and waving goodbye. Before I could even blink, she was gone. She ran off towards the light and with her, the animals went too, as did the sun and the flowers. Just as it looked all those years ago the land quickly dried up, there were no more birds or deer, the river all but disappeared, it was all gone.

I jumped to my feet and ran after her. In front of me, the world still glistened and seemed as if it was brand new, behind me, pouring rain and desolation nipped at my heels. I ran as the light became brighter and brighter, until I could no longer hear the rain behind me, and was only surrounded by sunlight and trees. I stopped and looked to a cliff where the girl stood staring up at the sky. As I made my way towards her she turned and smiled, reaching out her hand to show a single seed, unlike I’ve ever seen.

“It’s going to be okay,” she said. I took the seed from her hand, and with one quick breeze, she was gone.

Today was different, but tomorrow, tomorrow will be better.

I am simply looking for a creative outlet. I had a personal blog that wasn't seen by many so trying something new! Occasionally I write poetry, short stories, or just whatever is on my mind.

More stories from Victoria Rivera and writers in Fiction and other communities.