by Gloria Michael 2 months ago in Mystery
Report Story 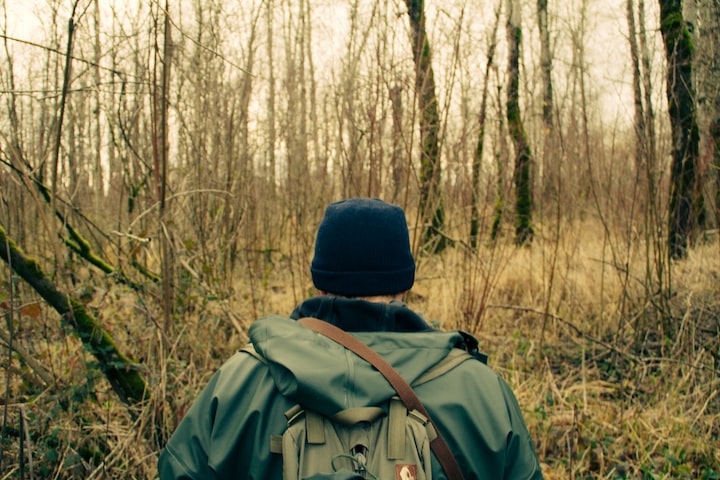 Or, more likely... someone looking for him. No, no way, he wouldn't have any reason to be out here, especially when the weather is supposed to be terrible.

Still, he can't shake the feeling that it's him being hunted. He knows he is being followed now, by the sound of footsteps pounding through the forest. Whoever it seems determined to catch him, and it's obvious that whoever they are they are not very pleased to see him. He pulls out his sword and waits, ready to fight if necessary.

A few minutes pass and still, the footsteps don't come any closer. They continue for a bit longer before stopping altogether. He lets out a sigh of relief and lowers his sword, he decides to wait until morning to confront whatever it is that's hunting him down. If he can figure out who they are, maybe he'll be able to take care of them before they get too close. Night came and he decided to take a little nap.

He wakes up early, he thinks that perhaps it's still nighttime and is beginning to wonder where he is. He glances over toward the windowsill in search of his cloak, but it's nowhere to be found. The curtains are pulled closed, and the only indication that there's any light inside at all is from the flames crackling in the fireplace and the faint glow of the moon through the windows. He sits up slowly, careful not to disturb the blankets that are covering him, and looks around the room. He recognizes it immediately. It's the room he spent his first night in, the room the girl in pink had shown him the previous day. He's starting to become increasingly suspicious, the way the girl acted didn't seem to fit the scenario he imagined in his mind when he first arrived. He pushes himself off the bed and walks over to the window, opening the curtains slightly. Immediately his eye catches sight of what looks like a shadow, it appears to be about three meters tall, floating just above the ground. He squints, trying to make out its features. The shape seems vaguely humanoid, but there's definitely no way someone could be living in the forest, especially not a person. Even so, he still feels uneasy.

As he stands there staring at the creature, he notices it begins to float towards the tower. When it finally reaches the top of the tower, it looks directly at him. In that instant, all the fear he felt earlier suddenly vanishes, replaced by complete hatred. It's like his entire world has turned upside down. A sudden thought enters his mind: he couldn't possibly go back to the castle now. Not without Erika, if she's still alive. He needs to get to her, and fast.

After leaving the tower, he makes his way to the entrance of the castle, running along the grassy path leading towards the front doors. The forest around him seems darker than ever, the sun setting on the horizon behind him casting a shadow across the ground. All he wants to do is find Erika and bring her somewhere safe, and then he is going to make sure she stays there forever.

Suddenly he hears a scream echoing throughout the forest. His heart begins beating faster and he races towards the noise, adrenaline rushing through his veins.

There, he sees a boy standing in the middle of the road, covered in blood and crying out in pain. He stops dead in his tracks and looks around frantically, trying to pinpoint the source of the scream. He doesn't see anyone, but he does notice that every single tree has a different type of fruit hanging from it.