Time passes slowly when measured in units of Life With Tim. 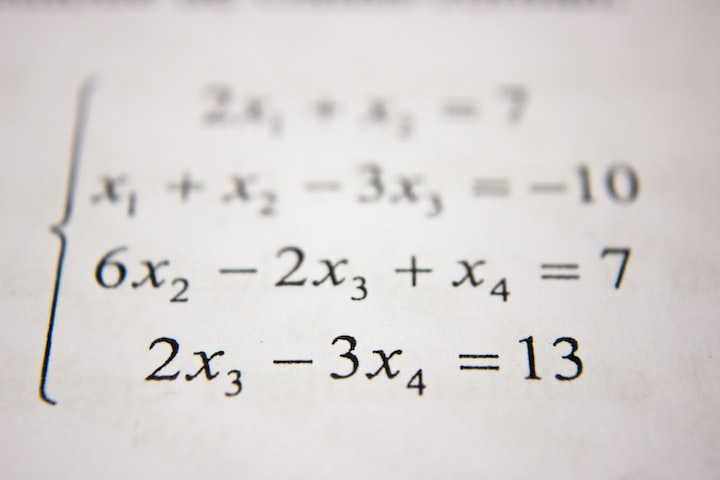 Photo by Antoine Dautry on Unsplash

T was no more than a variable in the convoluted equation that calculated the time complexity of Life With Tim. It was the amount of effort it took to shift the weight of her head to the other hand. Its passage was as heavy and unnecessarily painful as a sack of groceries dangling from a single pinkie finger.

The formula of the afternoon converted seconds to minutes, and then to hours, which—when plugged in for T—equaled the time it took to lounge around the flat until four o’clock, when it was socially acceptable to take the dog down to the park. Tim's one-bedroom garret flat, stacked on top of the laundromat, was as convenient as it was bohemian. She stared out the window at the copse of pear trees at the street corner. Pierre laid in his fluffy dog bed, his paws crossed, his head nesting patiently upon them. He was dressed in his park-walking flannels, attired for the Highlands, but named after his father, a nod to his mixed heritage.

So lounge she did on the divan. One did not sit on a divan. Such pedestrian activity was reserved for couches. She kicked at a pile of laundry he never put away, shuffling an unread newspaper as she got comfortable again. She glanced lazily at her coat on the hook by the door. Her bag and her shoes snuggled up in miserable loneliness next to his. She had worked her way into his life inch by inch: a pillowcase here, a pair of socks there, until Tim slowly realized he was living with someone and gave her the spare key. A fine concession, given that he spent most of his time in the bedroom anyway, hunched over his Mac in almost pitch darkness, typing with impolitic aggression. He was a freelance technical writer. His current project was a white page explaining the finer points of a machine learning model that could be trained on the buying and selling patterns of crypto currencies to predict the right time to invest in Dogecoin.

She imagined him blinking in the blue light to moisten his caramel-colored eyes before they dried up into cotton balls. She liked them precisely because they were as moody and distant. He was soft-spoken, but once he warmed to a rare subject of interest, and his shoulders came down from around his ears a little, Vanessa found him fascinating. Tim’s usual form was quiet punctuated with moments of irritated brilliance. He would be back there for hours still, his impossibly long frame slouched into his uncomfortable chair, his bony shoulders pressing into the fiberglass backing, both he and the chair shaped into a semblance of complexity and finished to look like wood.

She flipped through one of his books on developing low-res prototypes and ate a plain yogurt cup. She watched the tiny town’s even tinier populace come and go down the main drag. Pierre, unable to gauge his master’s body language, eventually curled up on his side, his head resting more comfortably than Vanessa ever had on the cushion of his bed. He sighed in the resigned boredom of house pets. A sudden afternoon shower offered short respite.

Tim's odd choice of a Victorian grandfather clock chimed the fourth hour, taking her and Pierre by surprise. She heard a groan from the back room, the sound of a tortured deadline. She rose, suddenly feeling too lazy to go down. She tied a scarf around her hair, put a leash on the dog, and left a note for Tim—though she knew he wouldn’t read it. She shut the door as quietly as possible and turned the key in the lock.

Every day since May, she had calculated her formula:

Or the Distance of .25 miles divided by the Time it took to while away the silent day, equaling the Rate at which she would drag her feet on the sidewalk multiplied by the square root of Walking the Dog at Four O’clock. The numbers never lied. Their walk got shorter and shorter despite the interminable day.

She paused beside the town’s only coffee shop, where they had met. It was empty, as usual. The intimately small, warm-toned, rustic place and the mustached barista in the expensive flannel had seen depressingly little traffic when she had first stopped in. The wholesome, corn-fed locals thought the homespun aprons and little "free range" sign on the decorative chicken coop made mockery of their poverty. Feeling sorry for the place, Vanessa had stopped in for a croissant, but stayed for the playlist. Blackstar crooned over the MUZACK.

Their gazes had touched over the rim of a Macbook.

On the day of execution, only women kneel and smile

At the centre of it all, your eyes

“Are you French?” he asked.

She sat down opposite the man and the MacBook with her coffee and croissant while David Bowie sang his own eulogy. His half smile took the sting out of the back-handed compliment.

The park was close at hand. Pierre reminded her of their purpose, tugging on the leash. She broke eye contact with her own reflection, and turned them towards the copse of pear trees at the end of the lane. Her step didn’t drag so as they approached the park, which was a largely open field affair with a gravel path and clumps of the unofficial town tree. The early autumn afternoon was brassy where the emergent sun struck the pools of water at the sidewalk’s edge.

Her expectations for interaction at the park were low, given that WP//IP--the Weather Conditions being directly proportional to the number of Interesting People who also happened to own dogs, but it seemed the brief shower wasn’t about to deter anyone. She didn’t see anyone she knew yet, but she was willing to keep an open mind.

Vanessa groaned once she spotted him. Not exactly what she was going for with her optimism.

On the park’s only bench sat Guy Du Black Beret, his jaunty cap hanging just so off the side of his head, another of Tim’s colleagues, whom she had been introduced as Tim’s French model in what perhaps his only, and longest-running, inside joke. If she had been told his name, she couldn't remember it. And anyway it didn't matter. He was an intellectual pleb, at least compared to Tim.

He was approaching. She thought fast. She hoped he spoke less French than she did, which was hardly any at all.

“Right,” he said, barely masking an eye-roll. Triumph rippled up her spine. Obviously not caring to introduce himself or perhaps thinking that she already knew his name, he continued.

“Tell Tim… I’d like to get together with him sometime…. You know, business stuff…Manuscript writing?”

He spoke slowly and gestured with his hands, classically refusing to ask if she spoke English (he would have been shocked), and actually attempted his own French.

“Interesting,” Guy Du Black Beret said, his good-natured—if ignorant—patience giving way to a questioning glare along the length of his nose, “See you around, Vamoose.”

“Au revoir,” she replied, twiddling the fingers of her free hand. She dropped it into a straightened middle finger to his turned back. She supposed he would tell Tim she wasn’t actually French. She imagined Tim's half smile and amused grunt, and nothing more.

Pierre did his business quickly, and before the sun had even begun its final descent, they were on their way back to the flat. She contemplated taking Tim to dinner. She wrapped Pierre’s leash around her wrist and tucked her hands into her pockets, suddenly cold.

The coffee shop’s door was propped open with a sandwich sign advertising $2.50 espresso drinks. David Bowie’s ghost was never not sad these days.

Lived with the best times

Left with the worst

I've danced with you too long

Nothing left to save

Let's take what we can

I know you hold your head up high

We've raced for the last time

A place of no return

And there's something in the air

Tim was gone when she flung the door open. The flat was still dark. She crossed to the counter. Her note, of course, was untouched, and he had not left his own.

She began picking her way around the shadowy, cluttered living room, tidying up. She righted books, removed the odd shirt from the lamp, and threw anything of hers into an obliging suitcase she had found crammed between the grandfather clock and a roll top desk whose owner had never sat at. She tapped out a few numbers on a ticker tape calculator, hitting the equal sign to produce the sum and a satisfying ding.

She stopped as she picked up Tim’s copy of Richard Feynman’s treatise on quantum mechanics.

"We should be more concerned with time's relativity to space," Tim had mused on their second date. He spoke either to Vanessa or to Time itself. She was not sure which.

"Time is without question relative to the space we occupy. Its flow can be correlated to contentment; we're only aware of its passing when we're unsatisfied."

Vanessa had braided her fingers and rested her chin on her knuckles, trying to gaze into his soul without looking like it. His curling blond hair spun out at odd angles beneath a black, boxy corps hat, catching a clean afternoon sun that warmed the glass beside him.

“Too bad it can’t really be quantified,” he said, sipping his coffee with finality.

"So you wouldn’t consider happiness an adequate measurement of time?" Vanessa had asked.

“Well, it might be a poor measure of time," he said with an uncommitted shrug, "but it’s all we have. A clock isn't much better. It's as deceptive as being happy.”

Vanessa liked that she didn’t disagree with him. She had smiled into an oversized mug, plugging in Time as T on a quick expression, balanced on an equal sign, her on one side and Tim on the other, stepping through the years like the positions of an array, performing a sort of map/reduce of Contentment.

But if T, D, and R were still the same variables as her Park equation, she mused, then she only needed P and G to complete a new equation

or the Distance from the bus station divided by the Time it would take her to Pack her things, equaling the Rate at which she and Pierre sauntered out with one bag each (walking was too pedestrian), times how long it would take Tim to Realize she was Gone.

It was still dark when she left the place, and the street lights had come on by the time she and Pierre stopped on the sidewalk. She put her suitcase down beneath the pear tree to wait for her Uber.

More stories from Ashley McGee and writers in Fiction and other communities.