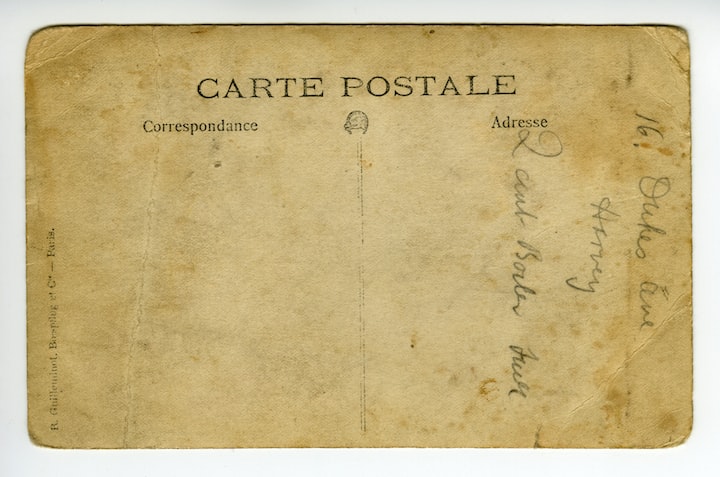 I stand on the deck, starboard side. I stand on the deck looking out. I stand focusing on my breath, in and out. I stand to calm my nerves. I stand to find an understanding as to why I have this pit of fear deep inside me. I close my eyes. I focus on the water splashing against the side of the ship. I focus on the sounds of distant chattering in the background, the boastful men bragging arrogantly behind me, making suggestive comments on my build and body. I hear squeals of laughter as if a group of immature schoolboys stand behind me. I turn around, confused as to why I hear little boys, as no children were to be on this trip. Advice given to all passengers which I did find odd. I turn around and stand before me, four tall grown men. A mirage perhaps of the untapped potential of boys posing to be men. I laugh silently to myself and continue to my relaxation.

I open my eyes and I look up to the sky. I see large puffy clouds pressed up against a pristine blue sky. I see birds of a color that I have never seen before. A bird expressed as the deepest of crimson. The density of rouge is exquisite; like nothing I have ever seen before. I cannot tell if the birds are as red as they seem or if it is just perhaps the hue is brilliant only juxtaposed against the crimson clouds and blue skies. I stare in awe, and for a moment, I forget where it is that I am. My senses return to my body, and I find my hands gripping the railing, white knuckled and tense. I have no idea why my body in such a relaxed state, has left my hands gripping onto the iron rails of the ship, almost causing more pain to let go than to leave them as they were. I relax my hands and I return to the sky. I see not only cumulous, but scaffolds of the atmosphere with levels of different clouds. The forefront being dark, shapeless clouds, and it is of that darkness which explains my hands holding for dear life. I see fog further out from port and during brief periods when the wind separates the fog and then it happens, I receive the message and I see the flags. I see white flags with navy blue squares. White flags with navy blue squares possessing a red cross. This is one of those visions, like one I have had before. I saw the flag. I saw the flag before it was real. No one believed the words that I had to say. No one believed what I had seen. No one believed me when I said something was coming. Nobody believed me. Nobody ever believed me. Perhaps it was because I was a woman. Perhaps it was because my family painted the picture of lunacy. Perhaps...

Without pause, I run to the nearest crewmember I could find. I bolt to the first man I see, with gold buttons and white gloves, to tell him what I have seen. I blurt out to him that I have seen what appears to be a warning sign. I blurt out what I have seen, and he scoffs at me. I tell him we need to speak to the captain and crew. I was unable to control my emotions. I was unable to control the words that spilled out of my mouth. It was impossible for anyone to see me, and it was impossible for anyone to hear me. Defeat was and still is my most common emotion. A defeat not caused by lack of faith on my part, but lack of faith of those around me.

110 years later, I say that I experienced a vision, a possession if you will. Not of demon or dark spirit but a possession in the form of a vision. I am still upon this earth, just in a different ship, in a different vessel, and I tell you possession is simply a message from the great internal conscious, the great being. The others just don’t understand it and, in a world, where leaders try to control the powers that be, become destructive to the powers of each country’s ability to be at peace. I saw the flag. I saw the flag before. The flag was real, I know it. I saw the flag and no one wanted to believe me. At dawn, we departed and said hello to the sea. And just as it was then, as it is now, I see another flag and yet, no one believes me.

That was then, this is now. 110 years later. The ”Titanic” has been factiously romanticized and falsely remembered stories and movies. Stories and movies that have not even come close to the truth of the “Titanic” yet these theories have proven entertaining for the spectators or multitudes. Even the name of the ship was a lie. The truth has remained secret- drowning along with the ship. The “Titanic” was not a new and fancy ship set for leisured guests, although that was the cover story. Reported in the news to distract everyone from knowing the true reason of its expedition. It was a ship set for sail by Britain to begin the process of destroying America. It was a ship set for sail, for an initial voyage of many others to destroy America and to start yet another war. A war of revenge.

The “Titanic” was Britain’s way to retaliation from an ongoing and unresolved feud. Unresolved differences of a “new world” and “old world”. Britain versus the Colonists. Britain versus America. A war of a revolution that ended; yet decades of bitterness and quests of revenge remained. Quite possibly the never-ending tale that has never been told.

The French agreed to working with Britain to help regain control of American Territory, with obvious benefits for trade and property, it was an obvious and believable motive. However, France was always America’s ally. America was well-informed of all details. The truth is that the ship, carrying valuables such as diamonds, emeralds, and other precious stones, intended for the French as a “down payment” so to speak. A “down payment” for their participation and help to aid Britain to try and claim what was once never theirs, as their government had become infected with greed and manipulation.

In the traditions of war and allied forces, there is always a level of uncertainty. There is always a level of distrust. A constant fear of being turned on, a lack of loyalty and those that are dishonorable to their word. America already had preparations in place, should their neighbors to the North were not capable of living to their promises. As I write, I know it seems as if this was not a timely process, however, this was years in the making. The first keel plate was made in Belfast, Ireland. This keel plate was equipped with small sized explosives if France went back on their word and decided to retreat from the plan.

Irish, forever thankful to France and America. As they were once rejected in their own country for being Catholic, many Irish men and women turned to France for education. Bonds broken and bonds built, the Irish went against the allegiance of geographical relation to seek religious and educational freedoms. The Irish, bold and brave, never sacrificed their beliefs, always loyal to their faith beyond anything else.

America also relied on a rebel, perhaps the biggest part of the whole operation who never was recognized for efforts or name. The name never mentioned. The name never known. The biggest piece of the puzzle to hopefully one day be at peace; and no one even knew who this person was. Leaving only an insignia of “J” and a red bird at the bottom of her letters. “J” worked sorting mail in the Royal Mail Post Office and all we further know about “J” is that “J” was a woman sworn to secrecy who was protected by forces higher than anyone could fathom. The groundbreaker to a new revolution and a new way of life, yet- no one would be able to recognize her.

“J” had found a way to adhere a fake message on top of the existing message on post cards. This cover was stuck on top of the message that needed to be hidden. It was placed onto the postcard and sealed by an adhesive that would lift when heated slowly, as not to destroy the intended message. She would decorate these temporary messages with hearts and love poems in an attempt to keep her concealed to the oblivious men that worked around her. This also kept her protected and secure from ever being called a traitor to Britain. She was never a traitor. She was just a woman in the mailroom who wanted rid of corruption in Britain. “J”, was quite possibly, the biggest supporter of her country; she just did not support her government like so very many others, and she was the one who decided to do something about it.

Fast forward to the crash and making a long story short, The “Titanic” did in fact hit an iceberg, but it was not the iceberg that directly caused the ship to sink. An iceberg was hit and it sent the boat into disarray, causing cargo and items to become loose and unravel, but it never punctured the boat. In the chaos of confusion and clutter, the postcards were strung out all over the floor, ultimately retrieved by the Royal Guards. One of the postcards had the cover message already unraveling as it must not have been entirely sealed. The secret was now no longer a secret. Before the guard could report to the Captain and crew, the bomb attached to the first keel of the boat was triggered, causing waters to surge, creating the start of the end.

The ”Titanic” which was meant to land in Newfoundland and it never made it. The messages were lost and the revolution halted. The precious stones dropped to the ocean floor. The hearts of the queen sank; diamonds of every color. Falling into the sea, tells the tale of the ship who’s real name will never be known.

A spirit having a human experience. Join me on this journey to popularize self-discovery, self-love, and love for mankind. Promise to never stop asking the world "Why?". Because nothing is as it was once thought to be.....

More stories from Jamie LeFebvre Hakeem and writers in Fiction and other communities.