by Adam Patrick 4 days ago in Short Story
Report Story

Enlightenment comes from a flicker in the dark 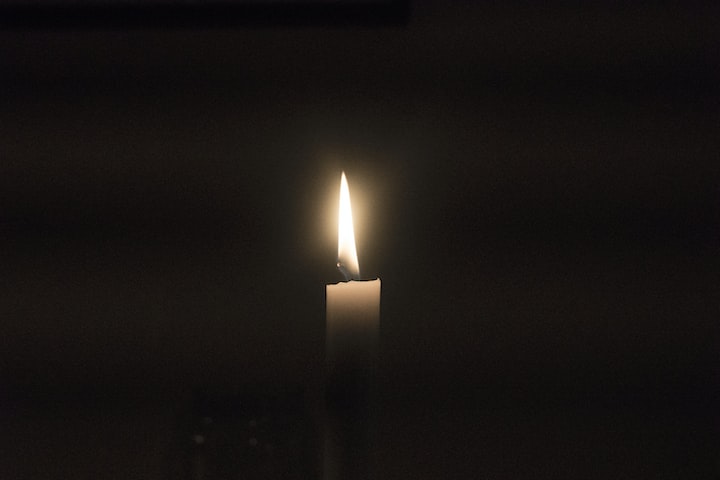 Photo by Jarl Schmidt on Unsplash

The cabin in the woods had been abandoned for years, but one night, a candle burned in the window. The cabin was nestled in the pine trees far away from the trail I walked each day. I took it to my grandmother’s house on Sundays. I took it to the store when we were running low on milk and eggs. I took it to school where I learned about math and English and history. History was my favorite.

I had never noticed the cabin, so obscured it was by the trees. When the orange glow caught my attention through the crooked limbs and twisted vines, I realized that I had always had a sense that something was there. An untold presence. Something lingering beyond everything that cluttered my vision.

It took only this small flicker of light to illuminate something I had never known was there. A pinprick in the dark. I wanted to know more.

I looked down the winding path that I had walked so many times. Clean and flat from the steady, consistent, pace of me, my family, my friends. Easy to follow. Comfortable and mindless, like the simple act of walking itself. I felt the urge to continue down that path. To stay where it was safe and certain. Where it smelled of honeysuckle and blackberries. Where small birds flitted between the trees, tweeting their familiar melodies.

I could not deny the strange sensation emanating from the direction of the cabin, though. Get curious, my father had always told me. Don’t simply accept what you hear, not even what you see. Get curious about it.

But I was afraid. What was in the cabin? Would I be able to find my way back to the trail?

I didn’t realize that I had taken my first step toward the cabin until I heard the dry leaves crackling under my shoe, the sole worn so thin from the trail that I could feel the twigs and acorns underneath.

I took another step. And another. I already felt like the trail had fallen away and I looked back to be sure it was there. It was the only space in the woods where the moonlight made it through the canopy of trees. The trail was bathed in white light, warm and welcoming.

I turned back toward the cabin and the vines seemed to have grown. The birds’ songs grew shrill and ragged. A hollow wind whispered through the limbs and the leaves. The candlelight blinked in and out of my view. But I knew it was there. It was pulling me. Tugging me towards the cabin.

I pushed on. I stepped lightly on shaky legs, vibrating with curiosity and fear. There were more trees than I had realized, more vines. The vines seemed to entangle my wrists. The limbs seemed to slash at my eyes and throat. They grew heavier with each step, the weight of them pushing me toward the ground. I suddenly became more fearful of the obstructions than of what the cabin might hold. I pushed with my legs and clenched my teeth and pressed forward, snapping limbs and razing the leaves from the vines. I burst through the tree line and fell to my knees only feet from the door of the cabin.

I saw then that there were two candles, one in each window on either side of the door. The glow extended all the way to the tree line, which seemed to have receded behind me. I became aware of how exposed I was. How vulnerable.

I climbed to my feet and went to the door. As I approached, the door eased open. Without hesitation—the time for that had passed—I walked inside.

Wind moaned through the spaces where the wooden slabs that made up the walls didn’t quite meet. It hummed a low, slow melody. I felt it more than I heard it. Like a song I had never heard was stuck in my head.

The room was dark but there were more candles. One on a small wooden table at the center of the cabin. One on a shelf on the wall. One on the mantle over the fireplace. A low fire danced among the stone. Just outside the glow sat the Shadow Man.

A great swelling rose in my chest. My throat constricted. I could hardly breathe. The Shadow Man’s chair rocked in time with the wind song; perhaps it was he who hummed the song.

“I'm sorry,” I stammered, but I didn’t turn to leave. The Shadow Man said nothing. Just continued to rock.

“Who are you?” I asked. The flames surged and drew my attention. From the corner of my eye, I noticed more candles. They lined the walls, illuminating the single room even further. When I turned back, the rocking had stopped. The Shadow Man was standing. The wailing melody seemed to have grown in the absence of the steady beat of his rocking chair.

The light had grown brighter but the Shadow Man's features had not been enhanced. I took a step closer—no, I was pulled closer. Two short, stuttering steps before I felt balanced again. I realized he wasn’t a shadow at all. He was a silhouette. Black like a moonless, starless night.

The fire boomed. It licked the stones at the top of the fireplace. The mantle was covered in candles. The melting wax dripped to the ash-strewn floor below. I could feel the heat. It was behind me too, stinging the back of my neck. I could smell the smoke crawling across the ceiling. I tasted the sweat that had beaded up on my brow and ran down my cheek to my lips.

It was bright as day except for the space the Shadow Man filled. Space. That’s what he was. That’s all he was. Wind rushed past me as I was pulled a few steps closer. The wind's throaty voice pulsed in my ears. It whispered to me words that were foreign. It sang to me stories that I had never heard. My face twisted and I began to cry.

The walls were on fire. No—they were glowing. The flames had fallen away. Radiant light emitted from the cracks as the voices grew to a crescendo. Millions of them. A cacophony of sad and lonely and powerful souls. A brilliant and hopeful hymn. Light flooded my eyes. The Shadow Man swelled. He filled the room. Overwhelming darkness in a field of pure bright light. I was dragged toward him with increasing ferocity.

I had learned about black holes in science class. I knew nothing could survive its pull. I would be ripped apart, torn to shreds. Stretched and pulled a million different ways. The clothes would be torn from my body. Skin shredded from muscle. Muscle ripped from bone. Bones disintegrated. Every molecule of me would be laid bare.

The booming voices encapsulated me. Their words rang in my head and my heart and my soul and I cried out as my body was hurled into the darkness.

But it was quiet. Not just quiet, honest and absolute absence of sound. The voices fell away. No light was visible. I thought it had fallen away too, that I’d been cast into a void where light could not exist or escape. But the light was still there. It was always there. It was within me. I could feel it. It coursed through my veins.

My mind stretched and expanded. My heart sang. When I opened my eyes, I was staring at the candle.

The lone candle in the window. I was back on my knees in front of the cabin.

The woods were quiet. Thin ribbons of moonlight were scattered across the cabin’s roof and the dry leaves surrounding me, like something had chipped away at the suffocating dome of limbs and leaves that had been there when I’d first arrived.

I could see things just a little bit more clearly.

I turned and peered into the woods, back the way I had come. Back in the direction of the path. It all looked different. Less menacing. There was space between the trees. The vines lay coiled on the ground. I could see clear through to the path. The path I had taken so many times. The only way I had ever known through the woods. The moonlight still spread out across its bare and even surface, shimmering like a river.

My eyes traveled down the tree line. Off to my right, there was another flicker in the dark. An orange flame blinking and twitching, its light just barely reaching me through the dwindling obstructions. Another cabin? This time I wasn’t pulled toward the light; I was curious.

I entered the tree line and navigated the obstacles with far less struggle; maybe I just had far more conviction. More desire to pursue what I didn’t quite know and understand. There would always be obstacles, I supposed; perhaps they would simply grow less threatening.

I wasn’t thrown to the threshold of this cabin. I walked out of the tree line and up to the door. Two candles flickered in each window. The door opened before me.

I knew I would never walk in the moonlight again.

I was born and raised in Southeastern Kentucky. I've travelled the world as an Airman in the U.S. Air Force. I enjoy reading and writing, working out, and (indoor) rock climbing. I'm also a Bengal cat dad.

More stories from Adam Patrick and writers in Fiction and other communities.