A story about waiting for a phone call. 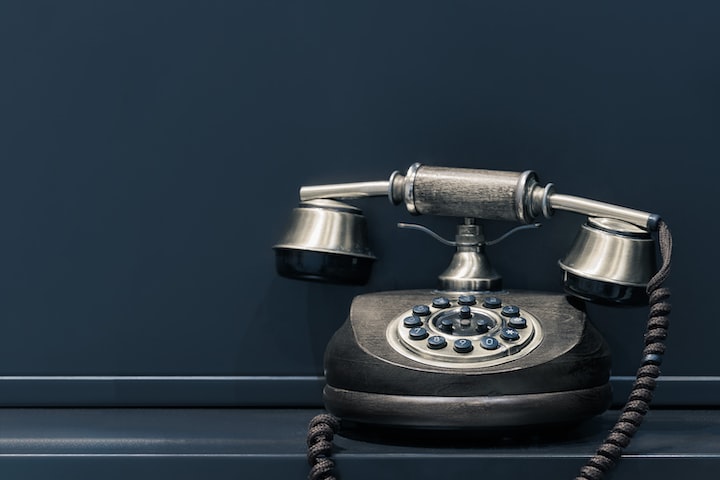 The secret to happiness, Geoff figured, was acceptance. There were things in life that couldn’t be helped, so you just had to accept them. A perfect life was impossible - if you even made it to “not bad”, well, you were beating the odds. And, as he saw it, he was definitely beating the odds.

He was approaching middle-age now - 45 this year - and the paunch he had been half-heartedly trying to work off for the last decade was now more or less a permanent fixture. His doctor said his blood pressure was a bit high, but on the whole he had his health and, unlike some of his friends, still boasted a full head of hair.

He was a mid-level manager for a regional hardware chain. There wasn’t any higher position to move to in the company he was at, and he wasn’t earning as much as some of his old high school friends, but the job was relatively cushy and afforded him and his family a trip away together each year.

And his kids! That was one part of his life he could say with confidence he and Vicky had done well. When he first looked into his little baby boy’s eyes, he knew what happiness was. Any doubts about his marriage seemed to drift away, and he knew he would do whatever it took to make sure those eyes would never look at him in disappointment or shame.

Two more had come along after John - another boy, James, and a baby girl. He and Victoria hadn’t been intimate since Millie had been born, but he had never even thought about another woman and he was certain Vicky was faithful. Their marriage may be a bit strained at times - what marriage wasn’t? - but she was a good woman, a good mother, and he did his best to be the best father he knew how to be.

Geoff’s not-perfect-but-not-bad life hit it’s first snag in a long time one morning as he was climbing into his car. He waved distractedly to the kids across the street - Michael, a boy John’s age whose family had just moved in, and he didn’t recognise the other boy - and had set about turning on the radio and starting the engine. He looked up just in time to see the two boys break apart, smiling sheepishly at each other.

Those little poofs, they were kissing in the front yard.

Geoff stared. His mind went blank for a moment, not fully understanding. His body seemed to tense up on it’s own accord, his fingers gripping the steering wheel tightly.

A moment later, he snapped back to reality. He looked away quickly, pretending to check something on the front seat while looking surreptitiously out the windows to see if anyone had spotted him. That’s all he needed - two boys kissing in the middle of the street, and he’d be the gawking pervert. When he’d finished his pantomime he put the car in gear and pulled out of the driveway. He waved again as he passed, without turning his head.

The rest of the day went by in blur. He couldn’t get the scene out of his head. He’d heard things were different since his day, but he’d never seen it. And out in the middle of the street of all places - surely most of them kept it behind closed doors?

Is it normal these days?

He was still turning the question over in his head when he sat down for dinner. Millie was telling him about her day as he distractedly nodded along - fortunately that wasn’t unusual, the girl could talk underwater. John and James were arguing about something, Lord knows what. Should he ask them? They were about the same age as those other boys. Would that be weird?

The thought of embarrassing himself in front of his own sons was too much, he couldn’t ask, no. And there was something else that held him back. He thought of the boys kissing again, and something cold and hard seemed to settle somewhere at the base of his spine.

“Geoff? Earth to Geoff? Is everything alright?”

His gaze snapped to Vicky. “Oh, sorry Vic, I just… the new kid across the road, what was his name again?”

At the end of the table, John looked up from his argument with James and sniggered. “Oh, Michael? That fucking faggot.”

The cold hard thing felt like it shot up Geoff’s back and into his chest. It happened so quickly he felt short of breath and sick, as though he couldn’t move. He was staring at his son. Geoff vaguely noticed the entire table had gone dead silent. John’s eyes were a sneer... but no, they were changing now, pulling back. He was nervous. Scared. His gaze dropped to the table.

“Watch your language, boy. You’re on kitchen duty for that,” he growled. John nodded mutely.

Later, he lay awake in bed, waiting for Vicky to finish up in the ensuite. He almost never raised his voice or punished his kids - he rarely had reason to - and his heart was still racing. He kept clenching and unclenching his hands. He didn’t want to, but he had to talk to Vicky about it, had to know what she thought.

Was I too harsh? — No, if anything a bit lenient. His grandma would have scrubbed his mouth out with soap.

With that, he felt himself relax a bit. It was ok. He suddenly felt exhausted, like he always did after these moments of tension. He drifted off quickly into sleep.

He dreamt about the boys kissing. At first it was Michael and the other boy, the one he didn’t recognise. But then he did recognise him - it was Timothy. It was always Timothy. And suddenly he was there, in front of Timothy, where moments ago Michael had been. He could feel his heart racing as they leaned in. Hot breath tickled his neck, and he kissed the boy.

The dream becomes more familiar. They aren’t on the street now, but under the stairs.

They hear the footstep too late. The door opens in the heartbeat. Too quickly. Too quickly to pull away, to look innocent. The scene rushes by in fast-forward - someone is screaming and something smashes - and then Timothy is pushing him out the front door. He runs. A black eye, a ripped shirt. He lies to his mother - some bullies, a fight, don’t worry - and goes to the kitchen. He sits by the phone, pretending to read the paper but waiting for the phone to ring. Waiting for Timothy’s mother to call his, and tell her what he is, waiting to be caught. A cold hard something curls up at the base of his spine and in the pit of his stomach.

His mother wakes him up, laughing. He fell asleep at the table. He spends the day around the kitchen. It frustrates his mother, but he’s waiting for the phone to ring. The cold hard thing never leaves.

It’s later, much later. He has spent forever waiting for the phone to ring, but it never does. He’s trying to find Timothy now. He’s running through the streets, checking every door, every place they had haunted together. Timothy’s gone. The cold hard thing isn’t resting anymore. Now it’s screaming across his check, his back, his skull.

It’s later, much later. He finds Timothy. It’s not Timothy anymore. This empty puppet thing, it’s neck is bent wrong. The eyes are missing, and the tongue is black and too fat. The lips are swollen, purple, grotesque. This isn’t Timothy. He doesn’t want to kiss this thing. But he can’t control his body anymore. He leans down...

Geoff wiped the vomit from his lips and flushed the toilet. The nightmare wasn’t new. It came on every now and again. It was less frequent now than it had been twenty years ago. After tonight it would happen a bit more often for a while, he supposed.

Well, that’s not new either, he thought as he clambered tiredly back into bed. Can’t be helped.

He felt exhausted, but he knew he wouldn’t be able to sleep. He lay in bed, listening to the gentle sounds of a house at night. Listening carefully. Waiting for the phone to ring.

More stories from Ben Norman and writers in Fiction and other communities.