by Julianne Algueseva 5 months ago in Fantasy
Report Story

Chapter Three of the Magic of the Dragon Princess. 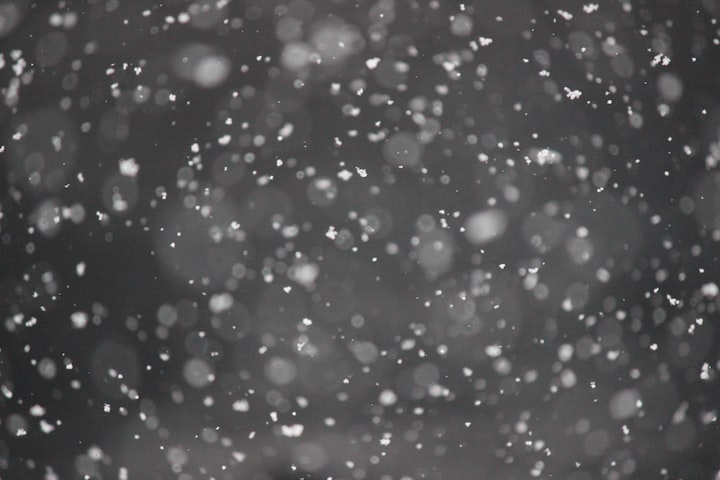 Photo by Jessica Fadel on Unsplash

The snow was falling fiercely, and the wind was blowing very fast. Cold as ever, mid-winter was definitely here in the Kingdom of Basiliska. King Scorp was looking through his window, still drunk from earlier, grumbling to himself. “I hate this time of season!” The queen walked through the bedroom door, putting her heavy fur coat up on the spiked hangers. Ursa said with a tired groan, “pooky-kins why don't you come to bed, it's late.” Scorp was still looking outside his window.

With a big sigh he said, “Honey, the night is still young, and the grandfather clock says it's only eight.” “Just come to bed!” Ursa replied with an angry voice. The king went into his bathroom, put on his pajamas and got ready for sleep. Walking back, the queen gasped, “what happened to your face?” Horrified by the sight of him she said, “who or what did this to you? 'Sniff, sniff,' and why do you smell like ale?” “Um, uh...” Scorp stuttered. “I got attacked by one of the guard dogs, and I bumped into a drunken guy who splashed his drink all over me.” Ursa looked at him with an irritated glare. “Mocking those creatures, you can really get yourself hurt. Also, you should stop drinking as well, that itself can kill you.” Scorp replied, “Yah, yah, yah, and we all will become poor people by the morning sunrise.”

“Ha ha, you really are quite amusing,” said the queen. Ursa and Scorp got into bed and went to sleep. Later that night the royal tyrant tossed and turned trying to run away from the terrors of his dream, in a strange way he couldn't. It was all hazy, but it soon became clear. In his nightmare, it was snowing, there were two creatures in hooded capes at the front palace doors. One taller and robust, and the other a little shorter and feminine like. They both were saying, “Please take care of her as if she was your own and make sure she's safe and warm.”

These large beings placed the baby in the evil ruler's arms, and then they disappeared into the blizzard of snow. As the king closed the castle doors and was about to look underneath the cloaked baby, there was a loud knocking. Scorp walked over to see who it was. Opening the doors, but before he knew it the evil king had awakened from the dream. Drenched in sweat he said to himself, “What a nightmare, I thought for a second... BAM, BAM, BAM... Someone is knocking at the front gates?”

“Who or what could be awake at this hour?” Shouted Ursa. Scorp ordered his queen to go to Angel and Honeys room and stay there until further notice. Ursa asked her husband, “Is everything alright my love?” “Go... just GO!” Scorp shouted. The evil king had a bad feeling about who was outside. So, he grabbed one of the skull swords from his wall, and went out of his bedroom chambers to get the guards.

The knocking continued, and everybody in the castle was woken up due to this load banging. All the evil guardsmen, including the king, hustled together and crept down the stone staircase. The knocking became louder and faster. Scorp and his men got to the front doors, but Scorp stayed behind and said, “I'll just stay here on the stairs while you guys take care of whoever is outside.” The guards got closer to the door, ready to open it and attack whoever it was. The loud knocking stopped, all seemed quiet for the moment. Suddenly, the front gates burst open, and all the guards were flung to the stone floor.

In the distance of the snow were many masculine, hooded creatures that were growling with glowing green eyes. All of Scorp's men fled out the back entrance of the castle. Some even went out the windows, and all who was left was the king. Cowering in his pajamas the creatures surrounded him. A voice rang out in Scorp's ears. It was a familiar voice the king thought, but in that single moment, he remembered the nightmare he had earlier was not a nightmare. It was a memory.

Not paying any attention to the large creatures that were snarling at him, the king looked back into his past and the memories he had blocked out. Still he couldn't remember why that voice sounded so familiar and what that dream kept haunting him. Out of the crowd of creatures, came the tallest and strongest. He said very calmly, “King Scorp, I have come for my daughter, where is she?” The evil ruler, scared and frightened by the hooded being, replied, “Why do you hide yourselves? Take off those capes!” The creatures looked at each other, then they looked at their leader. The head creature said to Scorp, “Are you sure you want us to take off our cloaks?” “Yes, I'm sure, it's not like your monsters under those things,” replied the evil ruler. All of them took off their hoods and capes, and surprisingly they were monsters, but only to King Scorp.

“Beast's, ahhhhhhh!” The king ran up the stone stairs like a frightened little girl, but before he could get to the top, the creatures had got to him first. They grabbed him and took him back to the bottom of the stairs where their leader was. “We all took off our capes, now I ask you from one king to another, WHERE IS MY DAUGHTER?" With eyes of rage and concern, the large monster picked Scorp up by the neck of his pajamas and spoke, “It's strange that you don't remember me. Let me refresh your memory then.” The giant creature went outside and spread out his wings and flew up to a tower with King Scorp in his claws, acting as if he was going to drop. him. Hanging in the air, Scorp screamed, “What are you? Who are you? And where do you come from?” The giant beast said with a harsh voice, “I am King Dallyoth the Fifth-tenth, ruler of the first Royal Kingdom. I come from a different world than yours that's much less barbaric, selfish, and a lot more kind, generous, and loving. I am not like you, and I'm not going to kill someone so pitiful.”

Scorp looked at the eyes of the dragon king, then he remembered, “Oh, your daughter, that's right she's.” Then Scorp remembered that these monsters told him to treat her respectively and royally, but all these years he's been treating her like a prisoner and hardly feeding her.

“Oh heavens,” the evil king murmured out loud. “What do you mean, 'oh heavens?” The dragon king said with an upset tone? “Your highness!” The other dragons shouted from down below, Dallyoth grabbed the evil king and flew down to where the others were. “We couldn't find the princess, all we found was these three.”

Ursa, Honey and Angel were all huddled together scared. “Please, don't be afraid of us, we're only trying to find my daughter, she's a princess.” Before Dallyoth could say anything else, Angel blurted out, “oh you mean that ugly freak we keep in the tallest tower of our castle. Man, she is so totally weird, I'm surprised she hasn't died of starvation yet, because daddy is not feeding her.” “Oh no,” Scorp said with a squeaky voice. “Is this true?” The dragon king said with a most irritated voice. The evil king took a big gulp, nodded and gave Dallyoth the key to the tower. The massive dragon roared with rage, as well as his followers. “I'll take the stairs, the rest of you go get some blankets.” Said Dallyoth in a rushed voice. The dragon king hurried up the stone staircase. Reaching the top of the tower he unlocked the door. He couldn't believe his eyes. There was snow coming in from the broken wall, bits and pieces of busted crafts were scattered.

Bodies of animals and bloodstains covered the room. King Dallyoth thought his daughter was dead, but she wasn't. She was in a corner sleeping on a stack of moldy hay. “My darling Jennibelle. ” "Uhhhhhh,” the little dragon girl groaned. Dallyoth picked her up carefully, but in her arms were four little mice, one baby fruit bat and a white horned owl. The king looked around at the site of the dead animals all around the tower, “we will take you too little creatures,” the dragon ruler said softly. The other followers of Dallyoth came running up the stairs with blankets, “fly her to the portal, away from this place as fast as you can, and don't forget these animals.”

The creatures flew out the broken hole in the wall, while the dragon king went downstairs where the evil family was. Dallyoth started to say, “I thought my wizard was right behind me?” “Where is he, huh?” “I'm here, just be patient.” In through the doors came an old dragon with holes in his wings, scaly wrinkles and a walking staff. “You know I'm not as young as I used to be. In fact, I still was old when your great, great, great, and several more greats' granddaddy ruled the throne.”

“We've all heard the story before, Merlin,” said the dragon king. “I only came on this trip to open the portal to this world and to help you with the perils along the way, and you know my name. It's not Merlin!” “Merlin was my master, I was the pet. What do you exactly need from me now?” King Dallyoth whispered in the old dragons' ear, “I can do that,” the ancient monster replied.

The wizard held his staff over his horns and said, “by sunrise may my pauper's curse be forever on your heads!” The evil royals gasped and started laughing.“That's it, a couple of stupid words,” said Honey. “That's a wizard, oh please,” replied Ursa. “Besides, just because you are a king from another realm, doesn't mean you are ruler of mine. I will continue to be king and that's that!” Scorp said in a scoff. “I wouldn't doubt the powers of this wizard if I was you,” Dallyoth spoke with assurance.

As the royal dragon and his wizard flew out the door, the sun was about to rise and still the royal family didn't believe the silly old magician. As the sun was finally up, a ray of green illuminated dust turned Scorp and his family into peasants. Their riches disappeared and their kingdom into ash.

More stories from Julianne Algueseva and writers in Fiction and other communities.