by Charles Turner 8 months ago in Short Story
Report Story 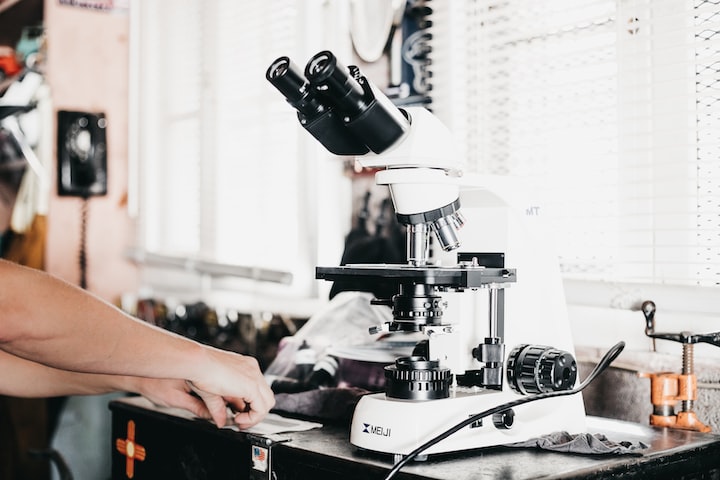 Photo by Misael Moreno on Unsplash

Clausen blinked his eyes repeatedly before the unexpected brightness. He was suddenly here when his memory held him elsewhere. He remembered a doctor, an anesthesiologist. Then, nothing. An absence of sensation, and light. Without knowing, without being. He turned suddenly, aware of someone‘s presence.. “Huh. You.”

He was looking at a man who had been around for years without being his friend. They had crossed paths at continuous junctions, yet rarely had spoken to one another.

“What are you doing here?” he said.

He was wearing a white lab coat. His pink skin went perfectly with his blond wispy hair and blue iceberg eyes.

“Which do you believe in? Miracles or science?” he added.

Peter’s attitude and the nature of his question clued Clausen that something was going on. Something of which he was a part.

“Science? Miracles? I don’t know. Both I guess.”

“The situation here is a bit of them both. So, tell me, Clausen: What are your last memories before just now?”

Clausen blinked away the eye contact. He turned his face down to avoid reestablishing it.

Peter let his gaze roam proudly about the lab, with all its tubes and vials and solutions. Furnished with cabinets and contraptions such as no other lab in the history of humankind had the merest whisper of knowledge of.

“The explanation I have for you is both simple and complex,“ he said. “I want to ease into it as gently as I can. Will you answer yes or no? Is your last memory of the day you went in the hospital and was operated on to put a stint inside you?”

Clausen said yes. “I confess I am confused. I should recall leaving the hospital and getting on with things. But I don’t.”

He looked around as had Peter. “And then I am here.”

“I must tell you. No more pussyfooting,” Peter exploded, unable to further contain himself. “You left on a gurney. I intercepted your body on the way to the morgue. As you had no discoverable family or friends I petitioned for the right to make all the arrangements.”

“Before the mortician could despoil your precious fluids or turn your body parts into useless refuse, I took what I needed. The mortician turned a blind eye. He was no friend. I had to bribe him plenty.”

Transfixed, Clausen failed to move and otherwise respond when Peter suddenly put his hands on his body.

“I grew this,” Peter said, exulting. “You are the first reconstituted human being.”

He stared feverishly into Clausen’s eyes.

“You are a replica of your former self while at the same time being your original person. Unlike Porkly, you turned out perfectly.”

“He’s a hog I have in the far back. The original prototype. I learned from my mistakes before growing you. It took three long years to turn you out. A perfect specimen. I took possession of your belongings, including the clothes. They still fit you perfectly.”

“Aa-urk,” came an agonized cry from the back of the lab.

Clausen knew it had to be Porkly.

“Why,” Clausen said - “Why do you keep him alive if his existence is unending pain?”

“My scientific colleagues. When I go before them to prove my work I need Porkly as well as yourself for display.”

Instead of clarifying, Peter had gotten Clausen still more confused.

“But why choose me,” he said, “for a subject? Why not a close friend or relative? Someone you would actually like to see again?”

“It was too late for them. The raw material needs to be fresh. Besides. My mother? Bring her back for what? So she can grieve herself to death a second time over losing her firstborn to a vicious murder? Her dead son? So he can be wracked with guilt for causing her death? No. Better to choose a stranger. At least near stranger. Someone who appears to have lived a constant even flow, not harming, not defrauding. In my judgment you are perfect.”

Clausen snorted. “This isn’t what’s called cloning is it?”

Peter had regained his self-control. He waved a flat palm.

“No. No,” he said. “Cloning is just another way to have a baby. Reconstituting may not be exact for what I have done, but it is what I am calling it. My processes grew the bones and the meat and the spinal chord and the brain and everything else strictly from the material harvested from you.” He paused, then looked significantly across the space between them. “I am the greatest scientist in the history of the world.”

“If you could do all of that on your own I’m certainly not going to argue with you,” Clausen said.

“Well,” Peter said, assuming a bit of modesty, “my work rests upon the shoulders of thousands of scientists who did their work before me. But I made the follow through on the science.”

He took several steps before poor Clausen and said, “Would you like to meet Porkly? He’s very sweet.”

Clausen refused. He had begun having urges and so needed to leave the lab to resume living the life he had left behind. “It’s been very nice,” he began.

Peter was quick to intercede. “Oh, no. You mustn’t try to leave. You owe me a few weeks of your time. It’s my fee for snatching you from the jaws of death. Once I present my thesis and allow them to inspect the evidence - you and Porkly - you will be free to leave or accept my help at rehabilitation.”

“Will you end Porkly’s suffering if I stay? I mean end it now?”

Peter’s face showed anger. “I expect you to be reasonable. If you don’t have more questions for me I will show you to your quarters.”

Clausen hoped he would not have to fight this man. He hoped Peter would not try to block his way. Instead of falling in beside Peter, his feet took him to the door, a massive metal construction that he found locked with no visible mechanism for making it unlocked. He turned away from it to confront Peter, who with his hands on his hips watched him like the parent watches the rebellious child.

“Now will you go to your room?” Peter demanded.

Reluctant Clausen bowed his head. “Show the way,” he said.

Suddenly ebullient Peter bounced away with Clausen several paces behind.

“Oh, you will love these quarters,” Peter gushed. “My onetime partner, Ed Slaine outfitted it for himself before he met that bimbo and sailed for Europe. Yes indeedy. Here it is.”

He flung open the door.

Clausen cautiously peeped in. It was, as Peter implied, more than just suitable. He stepped inside. Peter immediately tried to slam the door shut. Clausen’s foot blocked it.

“All right,” he said at last, obviously knowing better than to test his strength against the healthier man. “But please stay in there so I can work.”

Clausen waited for Peter to go. Then he looked for a screwdriver with the intent to remove the door lock. There proved to be one in an odds and ends drawer. After that, it was a simple exercise to remove the screws from the lock. He hid the parts inside the water tank of the toilet - obvious place police would search, but not someone like Peter. He looked the place over.

It was not bad at all. In fact, ultra-comfortable. It even had a fireplace and a wonderfully comfy chair from which to admire the flames or to read a good book or listen to an extensive library of music. Clausen opted for the flames. He needed some reflection time. First, he went to the kitchen where he discovered bottles of wine. He selected a chiante and emptied half of the bottle into a large goblet. Then, drink in hand, he settled to mull the mostly unbelievable situation in which he found himself.

It felt odd to know there was no gratitude within him. No feeling at all. Perhaps because there was no forewarning, no awareness inside the process. The only personal involvement was, he simply continued being alive, just as though nothing consequential happened. There were other considerations.

Firstly, he could not decide if Peter was a deranged individual. Could he qualify as a mad scientist? Clausen concluded not. It seemed more he was just a driven individual who spent all of his time alone.

Secondly, it felt wonderful to be alive. If he had to wait two weeks to reestablish himself he could wait.

But thirdly, he began to consider a world in which selected people need not stay dead while multitudes would be denied. There was no getting around it. For every reconstituted person at least thousands were sure to die. And if word got out, as it was sure to do, there would be riots. The police would soon be bound to shoot.

The sort of person to stand at the line’s head likely would be the ultra-privileged. He could envision regeneration being monopolized away from the most deserving.

After a silent twenty minutes, he knew he could allow no further attempts at regeneration. It was his duty as a human to defend the sanity of people, also guard the gene pool.

Clausen was no hero, in the comic book sense. He just knew he had to try. Plucking the fireplace poker from the stand, practicing swinging it with both hands, imagining a forceful blow shattering the skull beneath that wispy blond hair. Facing the lock-deprived door. “Go. You’ve got to do it,” he commanded of himself.

More stories from Charles Turner and writers in Fiction and other communities.