by Logamathangi Patheesan 5 months ago in Fan Fiction
Report Story 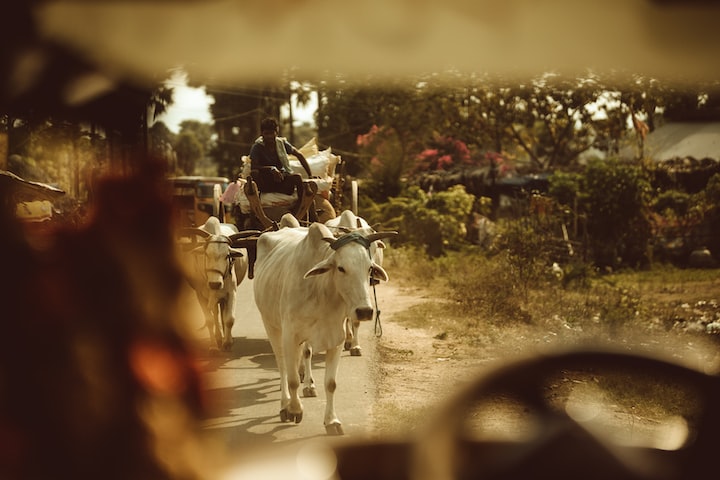 Photo by Taylor Brandon on Unsplash

Dusk was a welcome sight to Krishna as it meant he would be less easily spotted. So he went out; though he had many friends he had a mind of his own and strong will power. And though he had won many hearts, there was none who had his so he was never in one place too long. He kept running, from what he didn't know but ever since his father passed away in a car crash he hadn't been in one place for long. This gave him a plethora of friendships of all sorts. and he met up with many casual friends that night and the shots continued until the street lights began blur into a psychedelic haze. 4 in the morning; darn it! He didn't realise time had gone so fast - it was time to head home.

It was too dangerous to skate having drunk and that too in the night so Krishna tied the laces of his skates together and hing them around his neck and dawdled down the high street towards his home whistling and puffing plumes of cigarette smoke.

Little did he know that Rana had positioned seven of Neelan's men outside his home. So he was caught by surprise as they rounded him near his front gate, enclosing him in a tight menacing circle and took turns to question him.

"Why do you ask?" he replied and casually puffed the smoke in the face of the henchman.

"Do you know where Laxmi is?!"

"Who's Laxmi?" Krishna opened his palms in a sign of confusion.

"Where did you take her? Where is she?!"

"I don't know who Laxmi is, so how on earth would I where she is?" he was sobering up quickly now for he noticed the men had sickles jutting out from their back collars.

"Weren't you friends with Babu in college? The tailor's son? He eloped with our Laxmi!"

"Oh Babu! The tailor's son! Him! Really? He did that?!" Krishna asked gleefully, too gleefully for the angry men who were questioning him. But it seemed he couldn't help it, the news was apparently new to him and occasion to celebrate, so he took his phone from his pocket and dialled a friend's number.

"Hey, man! You know our mate Babu! Did you know he eloped with a girl called Laxmi? This is a great time for a party - I'm coming over for another round of drinks!" And with this he squeezed his way past the men. But they blocked his path understanding his ploy. One of the men put a heavy hand on Krishna's shoulder, stopping him moving away, whilst another grabbed his phone and threw it on the floor. Krishna hated any sort of restraint and took the hand off his shoulder before silently picking up his phone. His mother had bought it for him having saved up for months. As a another of the men came up to him to hit him, he expertly blocked the strike and delivered the man a smart blow to the head. At this, the men went wild and began to attack Krishna from all sides.

Krishna defended himself as well as he could, but one of the men hit him over the head with a rock, knocking him unconscious. They lifted him into the van and drove off to the village where Babu's others friends had also been rounded and brought to.

THE VILLAINS OF THE VILLAGE

"You won't escape from us so easily!"

Krishna woke to the frenzied sounds of taunts that felt like needles piercing his ears. Holding up his pounding head, he was about to clamber out of the rear of the van when five pairs of hands pulled him out.

"Hey! What are you doing, put me down! Where is this place?" Krishna exclaimed angrily until he was put on the ground and harshly pushed into a group of shabby looking young men who managed to stop him from toppling over.

Looking around, Krishna could see what appeared to be a whole village population gathered around him. Cows included. So many of the individual members of the crowd appeared to be shouting out different things to him at once, that the chaotic mayhem made him angrier.

"You tell us where Babu is now and take us to him!" one lady screeched. Krishna was just about to retort to her when he felt his collar being tugged at from the back. Turning around furiously, he balled his fists and just as he was about to strike out to steer loose, a steady stern voice that rang above the noise of the crowd stopped him in his tracks. The villagers' shouts dissolved into pin-drop silence.

Krishna turned away from the beefy man who had caught his collar to face a man who was the very epitome of strength and resilience. Neelan.

Neelan eyed Krishna with curiosity. "To find Babu and get Laxmi back" he stated.

"I don't know where he is." Krishna opened his hands in a gesture to connote that he had no clue.

At this, the man who had grabbed his collar earlier, one of Neelan's henchmen, tried to grab Krishna by the collar again, but Krishna was too quick this time.

"Tell us where Babu is!"

"You are his friend! You should know where they eloped to!"

Krishna was used to being cornered and scolded by his mother for his happy-go-lucky nature, but being bullied by this bull of a henchman with the backing a whole village and Neelan behind him, called for a change of strategy.

"Hey, do you know how many people elope in India? Do you think they all tell me where they are going?" He said in a mocking tone.

The henchman, who despite all his strength, could not match a goldfish in wit, fell dumb. But Neelan saw right through Krishna's wit and understood this stab at an easy way to escape. Neelan was not so dumb.

He walked up behind Krishna, laid a hand on his shoulder, spun him around, glared into his eyes and spoke.

"You will stay here, until you tell us where Babu is."

With these words he shoved Krishna back towards the group of young men who looked profusely like sheep rounded up for slaughter rather than Babu's other friends, which they were.

"May the wind under your wings bear you where the sun sails and the moon walks." - J.R.R.Tolkien, The Hobbit

More stories from Logamathangi Patheesan and writers in Fiction and other communities.