The Mark of the Reaper Owl

by S.D. Kang 4 months ago in Short Story
Report Story 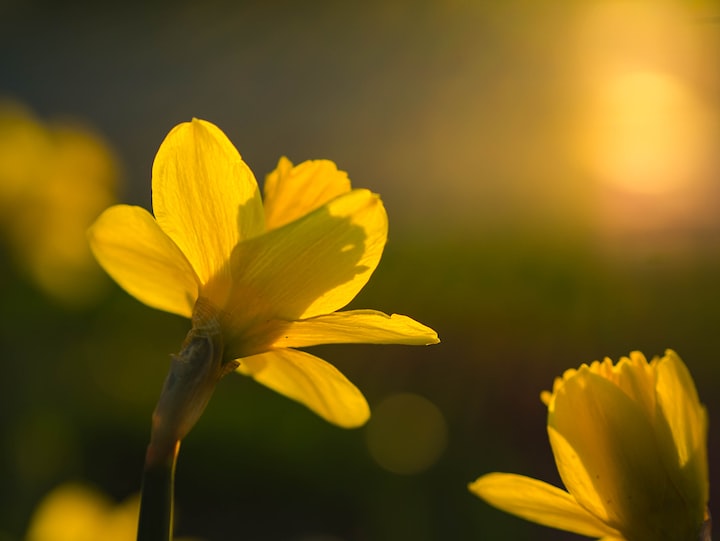 The yellow hue of the daffodil caught Roman’s attention. It was a pretty hue and he was sure Julia would like it. He crouched next to it and gently felt a petal with his thumb and index finger. It was soft and delicate, unlike most things in Neo Verona these days. The war between the two houses had left everyone on edge and ravaged the city. You only found pretty things like this outside.

He dug around the flower with his dagger and placed the flower and some of the soil into his helmet. He didn’t have a flower pot, but this would do. She was going to like it.

She had been holding a flower in her hand when he had first met her. Of course, she was also about to jump off of a cliff, but it was the flower that had caught his attention first. He had thought he was the only one left in the world who stopped to appreciate flowers. And just like that, he was in love.

Of course, fate had played a cruel trick on them, as she was one of them. But it wasn’t like he cared much for the war in the first place.

“Why would one so beautiful want to end her own life?” He had asked her after she had reluctantly agreed to step away from the cliff.

That’s when she had told him about those born with the mark of the Reaper Owl. He didn’t know if he believed in all that, but Julia definitely did. She told him that those marked by the dark wings of the Reaper Owl would constantly see it, wherever they went, calling them to embrace the eternal slumber. They belonged to the Owl, and its grip on them only grew the older they got.

As he made his way to the ruins, where they usually met at, he looked around to make sure no one was following him. He was fully prepared to talk her out of whatever situation he may find her in. He’d be lying if he said he didn’t feel jealous sometimes. It felt like she was constantly in love with death and that he took second place in her heart.

Roman stopped for a second and took a deep breath. He couldn’t give up on her though, he knew it in his heart that they were meant to be together. He touched the small vial of poison he wore around his neck by habit. He would do anything in his power to make it so, anything at all. And so, he adjusted the flower a little in his helmet and went into the ruins. Fortunately, Julia was not about to do anything terrible. She was just sitting down, drawing something on the ground with her finger. She was just being her radiant self and effortlessly taking his breath away every time.

“Salutations, fair maiden!” He announced his presence in an exaggerated manner as it never failed to steal a smile from Julia. “I have stumbled upon this here treasure. Its splendid beauty, but a fraction of your own, but nonetheless, the closest one can expect from this mortal realm.”

As the words left his mouth, he regretted mentioning the word mortal. But thankfully, she rewarded him with a smile.

“You know I can’t take that with me, right?” She asked as she got up and dusted her skirt with her hands.

“Because of the helmet?” He asked, realizing that his family crest on it probably wouldn’t be overlooked by her family.

“Maybe we could plant it here.” She suggested, her smile seemingly holding back an infinity of sadness as usual. “As something we leave behind when we are gone.”

He had been about to say they could look at it every time they met there. Still, he didn’t want to clash with her verbally, not when the times they met were precious few to begin with.

“Where should we plant it? Maybe over here in the center so that it gets plenty of sunlight during the day?” He asked as he pointed and walked towards where he thought was best.

“Yeah, sounds good.” She said as she approached him and stood beside him.

He crouched and started to dig with his dagger once again. The dirt there was a little tough to dig, but that was to be expected on any ruins. When he was satisfied with the depth of the hole he had dug, he placed the delicate flower into it along with the soil from where it was originally from, covering only a few centimeters at the top with the soil he had displaced from the hole.

Once he finished patting the dirt down with his hands, he realized that his dagger was no longer on the ground where he had left it. As his heart dropped in his chest, he turned to find Julia holding the dagger as she slowly slid her index finger across the flat of the blade.

“Hey, let me clean that for you.” Roman said, slowing his breathing to calm his heart. “Beautiful hands such as yours shouldn’t be touching such black soil.”

Julia stayed quiet for a moment, but it had been long enough for him to wonder whether she had heard him.

“What are we doing, Roman?” She asked as she visibly gripped the dagger more firmly, with the blade towards herself.

“What do you mean? Hey, hey, let’s talk about this.” He said as he slowly approached her with his hands open towards her. “Come on, Julia, look at me. Let’s talk.”

She hesitantly looked up from the dagger to meet his eyes. For a split second he wondered if he could drown in her eyes before pushing such thoughts away.

“The only reality that matters is that I want to be with you.” Roman stated as he inched closer with his hand now outstretched. “This war won’t last forever, Julia. I will do everything in my power for us to be together, I promise.”

Her expression softened a little but the sadness in her eyes was still heartbreaking for Roman to see.

“It’s not just the war, though, is it?” She asked as she gently handed him the dagger. “You love life, you see beauty in the smallest things, while I-”

Julia closed her mouth and looked at the ground, making Roman wonder if she was seeing the Reaper Owl at that very moment.

“I’m different.” Julia finally stated before looking back up into his eyes. “I love you, but I can’t have you. The more time that passes, the stronger the influence of the Reaper Owl will be. I will want and crave. I can’t and won’t be able to change. This is the way things are for me and with me, it is set in stone, and you can’t follow me.”

“Who says I can’t follow you?” Roman asked as he embraced the love of his life as hard as his heart shattered. “Just as it is your burden to be unchanging, so it is mine to be beside you. We can make this work! And if at the end you really feel like you can’t, then I will cross the bridge to the afterlife with you. I will go where you go.”

“I won’t let you.” Julia suddenly said as she broke away from his embrace. “I can’t fight it anymore so I must go, but you are too precious to me. I don’t want to force you into anything, I don’t want you to change just for me.”

“But that’s just it, dearest Julia.” He said as he approached her once again and held her hands. “I’m not changing. This is who I am and who I have always been. One longing to be forever beside the one he loves.”

And with that, Roman pulled the silver chain around his neck to reveal the glass vial he wore since the day he had met her.

“I always knew there was a possibility that you would not be here waiting for me one of these days.” He said as he showed her the vial. “This was my guarantee that we would be together even if you took your life one day. This was how I was going to follow you. I was always ready.”

A single tear rolled down Julia’s face as the corners of her lips trembled.

“Then will you cross the veil with me?” She asked, sounding so vulnerable.

“I’ll take the first step.” Roman said as he unscrewed the vial. “I’ll drink half and you the rest.”

Despite her tears, the smile that she now gave Roman finally felt sincere, untethered and pure. And so Roman put the vial to his lips and drank of the poison.

He had expected the liquid to be bitter, and maybe it was. But the idea of finally being with his beloved Julia for the rest of eternity was too sweet. He looked at the vial to make sure he had drunk half when his reflection on the glass surface caught his attention.

On his forehead he saw a drawing, maybe a symbol, of what looked to be a pair of dark wings. He slowly turned the vial in his hand to the left and to the right to make sure what he was seeing was actually there. He turned to ask Julia if there was something on his forehead, but the love of his life was no longer standing beside him.

“Don’t worry, I’m still here.” Julia said from behind him.

Instantly relieved, he tried to turn around again but suddenly his legs gave out under him. Julia caught him mid-fall and slowly lowered him, kneeling with him.

“That’s a strong poison you brought, it shows your resolve. It shows how much you love me.” She said as she moved a strand of his hair on his forehead. “And that means we will be together faster for it.”

“I-” He didn’t know where to begin or what to ask, but with some effort, raised the vial to her.

“Don’t worry about that.” She said, as she clasped her slim fingers around his raised hand. “We will be together, I promise. I knew you were special-”

Suddenly a set of dark wings opened on Julia’s back. Roman stared at them as it all clicked in his head.

“-since the day you were born, when I marked you.” Julia said before kissing him on the forehead. “Now sleep. When you wake up, we will truly and completely be together, my love.”

More stories from S.D. Kang and writers in Fiction and other communities.