The Legend of the Monsters

In the endless forest, there is an old tree with a dense canopy. I don't know when this old tree became a forbidden area of death because there was a rumor spread in the forest that whoever came near this old tree would be immediately hit by a flying disaster. 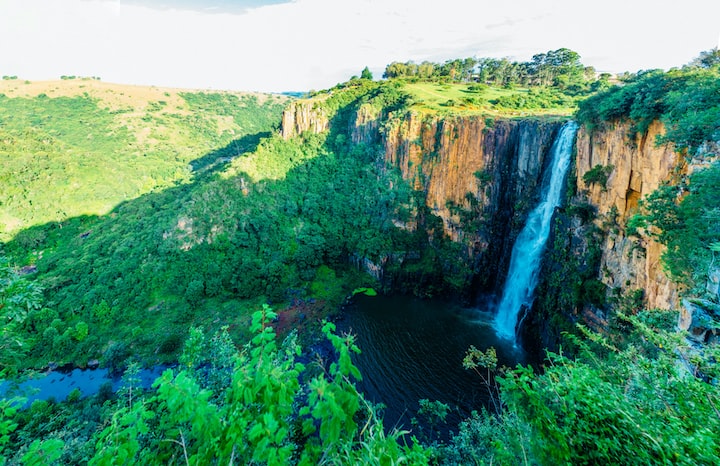 Photo by Ashim D’Silva on Unsplash

The Legend of the Monsters

In the endless forest, there is an old tree with a dense canopy. I don't know when this old tree became a forbidden area of death because there was a rumor spread in the forest that whoever came near this old tree would be immediately hit by a flying disaster.

The birds and animals gathered together to discuss countermeasures, but could not come up with a good solution.

They had to go to the wise old fox for advice: "Mr. Fox, you are the wisest and cleverest one among us, now the disaster is approaching, none of us can think of a good solution, so I implore you to personally come out and quietly snoop around to see what kind of monster lives near that old tree."

The fox was complimented by everyone and was naturally very pleased. However, although it readily agreed to everyone's request, to ask it to risk its life for the benefit of everyone, the fox would not agree. The fiery red-haired slicker had a bright idea and decided to let his friend, the curious magpie, go to that hellhole to see what was going on.

The simple-minded magpie flew around the treetops twice and found two sparkly things flashing between the dense leaf gaps and heard a fluttering of wings. The magpie was almost scared out of his wits and flew back to the fox to report it.

The fox gathered all the ogres in the forest and announced loudly to them, "Friends, it's bad, it's bad! A beast named 'Chuda' has appeared in our forest. So far, although no one has seen its fangs with their own eyes and heard its frightening roar, I want to tell you that I will never take the risk. I also ask you not to go either!"

After the fox finished speaking, he moved away and never wanted to live in the forest again. The other birds and animals were scared into silence and soon followed suit.

This story tells people that they should practice everything they do to know the truth of the matter, otherwise they may lose more.

A similar situation often happens in human society, where an unfounded rumor often causes panic and unrest in the entire region. The reason why rumors are so powerful lies in the weaknesses of people's psychology.

One of them is the psychology of curiosity. Almost all rumors are strange. What ancient wells appear mosquito dragon, the Bodhisattva shed tears, the woods appeared in the monster, etc. So, people with a strong curiosity spread and become the rumor volunteer propagandists.

The second is the psychology of the crowd. As soon as you hear that everyone believes in it and is spreading it, you follow suit and consciously or unconsciously become the sounding board of the rumor.

There is a saying that "silence is golden", and the best way to deal with that gossip is to turn a deaf ear to it and laugh it off.