The Lady of the Chateau

Inspired by the communal pianos of Italy. 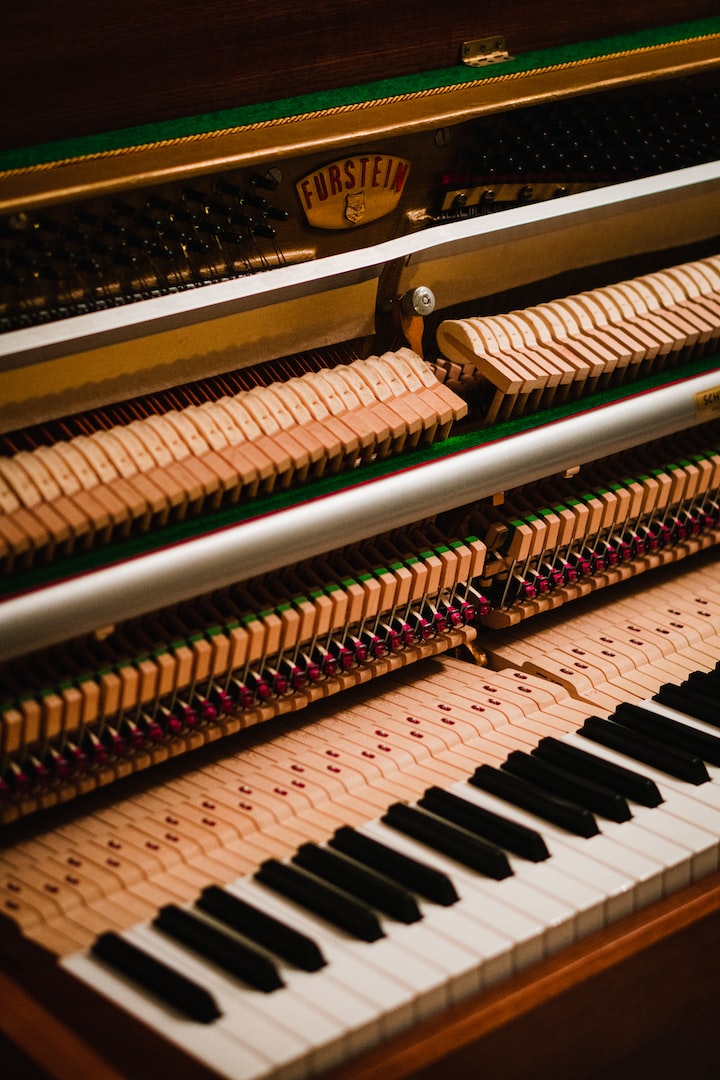 Surrounded by vibrant flower gardens, showcasing the pastel purple of lavender, and bursting with rainbowed bushels of Alstroemeria, dotted with the sparkling windows of hot houses containing lilies and full-bodied roses… stands the Grand Chateau of Avolier.

Its prominent windows encase old English stained glass, creating a subtle kaleidoscope through the day, which is visible to the thousands of visitors who make the pilgrimage every year.

The colours have the pleasure of dancing over dense fur rugs, expertly crafted marble statues, and rich coloured paintings adorning the inside of this picturesque home.

The dining table is always expectedly reset every morning with mirror-like silverware and fine china, though nobody has had use for these in a number of years.

In the evenings, the coloured panes of the windows twinkle into the still nights – creating their own constellations by the licks of candlelight emanating from the Chateau's music room. No visitors have resided in the guest wings of the chateau for… well one generation.

The Lady of the Chateau's generation.

Being the only permeant resident, everything in the home is set how she likes it by her trusted handpicked household staff.

Though mostly unused, the objects selected to feature in this decadent home don’t gather dust – each day, everything is packed in the evening to be reset in the early morning before the first travellers arrive. This rebirth of the home is what gives the visitors an impression of being lived in.

Each of the workers are personally thanked for their efforts every evening, and the doors are bolted on their retreat. The candles aren’t the only sign of life during the evenings however, as the gardens are serenaded by her grand piano, as the music creeps through the flower fields and lull the residents of the estate to sleep.

The same music is played in the same order, allowing an alternate form of timekeeping for any fortunate enough to live close enough. The way she expertly fingers each key has been a lifetime of talent and dedication in the making. At the same time each evening the candlelight is extinguished, and there is no sign of the Lady until the morning sun once again rises.

Gossip about why the Chateau remains closed at night time peppers the lips of those who are trusted in the running of the household. Some believe the Lady has secret visitors to entertain, other more cynical minds speculate she must be performing rituals at a shrine that she hides from guests…

In truth, the Lady has tired from the company of people in awe of her wealth and talents, or those well-wishers who desperately want to find her a worthy suitor. The night brings her peace to entertain herself after the exhausting days she spends hosting, touring, and gardening. The Lady’s intentional solitude allows her heart to explore in ways she can’t in the company of others.

One notably busy summers day in June, the Lady of the Chateau was dutifully touring her 3pm group around the gardens when she heard a foreign song. Though this song was new to her ears, there was something strangely familiar about the sound. As she listened intently, her eyes fell to a gardener pruning her topiaries. The look of horror on his face was the moment she placed why this music sounded so native to its surroundings.

It was her piano.

A few landscape architects and harvesters raced after her; partly from a desire to help their cordial employer, but mostly to witness what would happen to the person who dared violate the sanctity of the Lady’s only possession off limits to the hands of visitors.

There was hurried excitement from cooks, cleaners, landscapers… just about every member of the household staff bustled into the music room at once.

Behind the red velvet ropes, sectioning off a modest performing space with the piano at its centre, sat a modestly dressed man with deep chestnut curls; seemingly plucked from one of the marbled figures placed through the halls of the Chateau.

His previously content face turned to shock, and a little amusement, at his abrupt audience’s presence. His rough hands still continued a little longer on his merry song before he plucked his last key.

“Excuse me, what has possessed you? Can you not read?! The signs clearly state that this piano is off limits!”, exclaimed the Lady in a sharp tone.

Though not as much a spectacular outburst as the household staff had guiltily hoped for, everybody watched intently as the gentleman fell over his words with apparent naivety of the polite notices.

In a heavy Italian accent, he responded with his hands clasped over his chest, “Mi scusi Signorina…” (My apologies Miss…)

His smile still curled from under his moustache, “… ma il tuo pianoforte e bellissima.” (But your piano is so beautiful.)

The Lady, flushed a little from the hast of her journey through the estate, instantly regretted the tone she had taken in dealing with the trespasser and blushed further by her lack of understanding of this gentleman’s obviously humbled apology.

She replied softly, “My apologies, I assumed you could read English. Do you speak any English?”

To which the visitor’s furrowed brows replied silently that he did not.

The gentleman’s sincere eyes melted away the remaining hostility in the Lady. Very aware of each pair of eyes that were darting to the gentleman and back to the Lady, she addressed the expecting crowd, “Thank you all for your concern, you may all leave and resume your duties.”

As the last of the nosey staff left the music room, the Lady followed and as she walked towards the enormous doors the soft click of the handle signalled to them that she was not to be disturbed.

“Well, I must admit I have never heard another musician play the keys of my piano... I was shocked, but you play very well, Mr...”

“Scuso, Signorina. Non capisco… er…” (Excuse me, Miss. I do not understand… er…), the gentleman replied, with a little embarrassment, and his hands gesturing his confusion, facing his palms to the Lady.

“Erm… How do I say this… Oh dammit.” Exclaimed the Lady, frustrated that her deceased parents had favoured French over Italian.

Accepting defeat, and wishing to make amends for her previous outburst, the Lady beckoned the gentleman to sit with her at the piano.

As they sat down, the Lady started her usually solo ritual. Running up and down the keys with knowing hands and even more intelligent fingers. The gentleman watched on with wonder filled eyes. After a few more minutes of him being lost in the pattering keys, he lifted his hands and started to harmonise his own playing with the Lady’s.

The Chateau that day was bustling with song. Any whispers were drowned out periodically by the dual tones emanating from the music room. Each of the household workers asked the same question at short intervals, “Are they still in there?”

When it came to that part of the evening where the Lady would meet the staff in the foyer and thank them all for their hard work, the Lady was nowhere to be seen. Her presence in the Chateau was known through the trickles of music that escaped through the cracks of the music room door.

The staff left that evening with a smile at the thought the Lady had found a companion for the evening, and for the first time since their employment had started no less. Their music moaned on into the early hours of the next morning in ways previously unheard, with the dull tinkle of a lullaby.

The morning journey up the mile of cobbles to the Chateau was filled with whispers, and adolescent giggles at the excitement of finding the gentleman sat at the dining table drinking coffee from the china teacups.

As the bustle of giddy household staff stood patiently waiting for the Lady to open the doors, they looked to find anything out of the ordinary through the decorated windows…

But everything was as it always had been.

At 8AM, the bolts slide on their tracks at the back of the doors, and there stood the Lady. Immaculately dressed as always, with her hair pulled up into a French Twist, minus a few wisps of her chocolate curls framing her delicate face, which was notably peaceful and showcasing a gentle smile.

The first eager workers entered the Chateau. Each of them peeked to the left searching for the gentleman, and then to the right into the dining room.

Everything was how the Lady liked it. the table still set and unused, the rugs ruffled as though nobody had stepped on them, and the cushions on the loveseats were plumped.

Over the next few months, the Lady had many buyers over to the Chateau.

As she strolled them round the gardens, she instructed the maids to allow the accompanying children to play in her music room, and they tapped away at the keys of her piano with juvenile curiosity, filling the house with laughter and incoherent tinkles of music.

In the December, the decision was made that the Lady would donate the estate to the household staff there in her residency, agreeing amongst themselves that it would continue to run how it had for the years they had all been there.

What happened to the Lady, none of the household’s new owners knew for certain.

The gossip was that she had joined a cult, but more commonly the story goes that she ran away with the mysterious gentleman who once visited - now married with her own children on the Amalfi Coast.

In truth, she had grown tired of her own melancholy.

Her life was now a humble one. She lives life in no particular place, travelling around the country which broke the spell on her disinterest for life and thankful to the gentleman who ignited her long lost thirst for adventure. Maybe she secretly hopes her music will enrich another's life.

If you walk the streets of Italy you are sure to hear her wonderful symphony of keys on one of the communal pianos dotted around public metro stations, airports, and community spaces.

And that is the story of the Lady of the Chateau.

I am a budding poet and short story writer from the UK.

My inspiration comes from love, heartbreak, travelling, and classic literature.

Subscribe to be notified when a new word baby has been uploaded!

More stories from LB and writers in Fiction and other communities.