by M.W. Whitaker 3 months ago in Sci Fi · updated about a month ago
Report Story 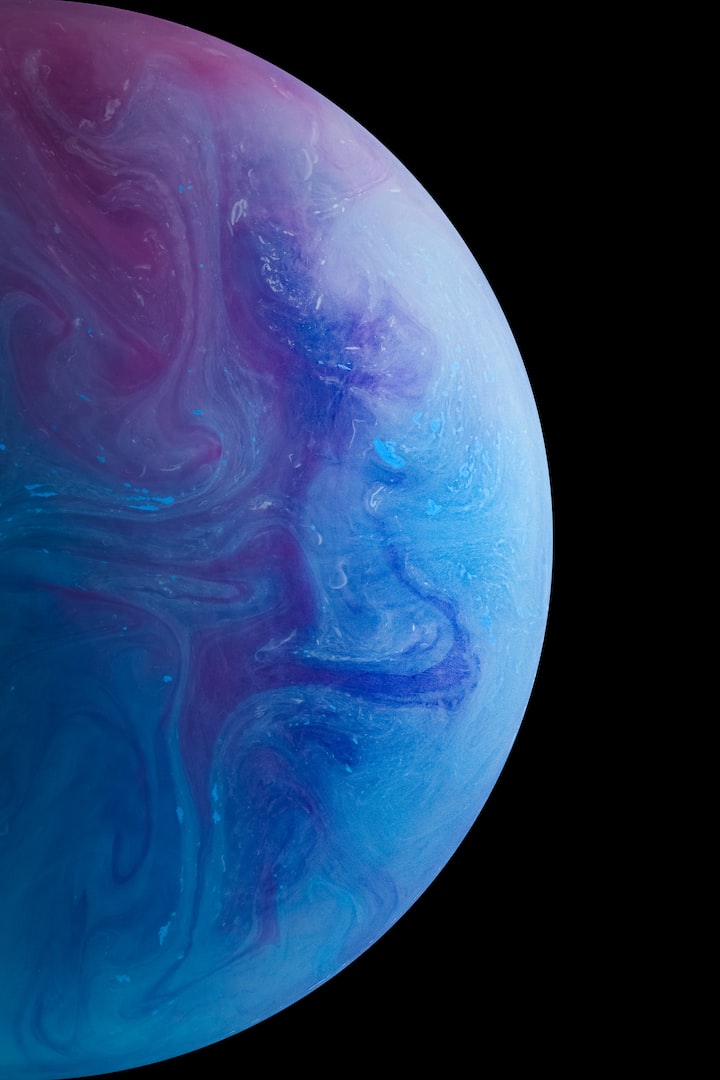 I should have felt afraid, but I didn't. It was big. It reminded me of one of those larger whales from Earth, like a right whale or a humpback though it only vaguely resembled one. It was roughly thirty meters long. It had long wing like flippers on each side, but they were diaphanous, and unlike a whale, it was vibrantly colored, with electric blue bio-luminescence on its face. It's tail wasn't flukes, but long elegant fins that seemed almost metallic but in hues of blue and teal. Two violet blue eyes regarded me from the outsides of its face. It was only about twenty meters from the window. My training kicked in, and I tapped a button on the console.

"This is Samarkand Station to unidentified life form. Please identify yourself."

The whatever it was blinked at me. Impossibly, it made a sound. It was loud enough to hear in the command center, but not excruciating. I tried again.

"Unidentified lifeform, this is Samarkand Station. Do you require assistance?"

It hovered there a second. Then it flicked it's tailfins and started to move away gracefully. It paused a second, turned and looked at me again, then sped up slightly. It's speed increased. It turned sharply, and then, with a flash of white light, it vanished. The whole encounter had lasted less than a minute. I sat there a second. I took a ragged breath. My heart was beating rapidly.

"Computer, begin recording." I managed, "Station log. Addendum. An unidentified lifeform just made contact with the station. It did not appear to be hostile. I am not sure if it was an animal, or a sentient lifeform. It appeared to jump to faster than light speed. I don't know if it will return or not. Station scanners recorded the event and the computer is trying to figure out what sort of creature it is. Aldington out."

I made my way back to my quarters. The emptiness of the station seemed more pronounced than normal. After the war ended, I had debated abandoning the station like Taggart and the others had, but here I had supplies, food, and energy for several lifetimes. It would have been ideal, except for the eerie stillness. There seemed to be no way to avoid it. Not that it was dark or anything. But that was due more to me than the station itself. At first, I obeyed power-saving protocols. Lights out when not in use, and let the motion sensors activate the lights when I'd come into a section. But whoever wrote the protocols didn't take into account the station ever having just a single occupant. Every time the maintenance robots moved, the lights would activate. Not all of them, just one section. The first few times it happened, I remember calling out, thinking that it was one of the crew coming back. Then later, I'd have panic attacks thinking that it was the enemy boarding the station. Sometimes, I'd wake up, my anxiety kicking in. I sometimes slept with the lights on in my quarters.

Eventually, I turned off all the motion sensors in the section of the station I was in. If my CO was still alive, he would have doubtless put me on report. I tried different ways to make the station more livable. The lights were on all the time that I was awake. It was silent, the only sound was the odd hum of equipment and the air system blowing. I had tried playing music throughout the station, but with as empty as it was, it reverberated and echoed long after songs stopped played. So the music went except for in my quarters. Next, I tried other recordings. I tried playing old broadcasts, everything from sitcoms to talk shows. I spaced it out with video letters and greetings from my family back home. For some reasons, hearing the voices and laughter didn’t seem to echo as much, and it seemed almost lively. Then one day it hit me.

Everyone in those recordings was dead. I remember pausing the recording of my mom and my sister with her new baby. They were laughing and smiling, wishing me a happy birthday. I never knew what was worse: the silence or listening to the voices of people I knew were gone. Sometimes I wondered if there had been anything that I could have done to help. It was stupid, but maybe if I had been on Earth, somehow, I could have stopped the onslaught. If I had been a fighter pilot or the captain of a destroyer, could I have stopped the Fasioti Tagata ship that made the run with the planet killer weapon as it approached Earth? Would I have died with my family, or with my sisters and brothers in arms as the fleet orbiting Earth was destroyed? Invariably, my thoughts would grow even darker as I wondered if it would have been better if I had been destroyed too. I tried not to think about my family and friends. But every now and then, I’d have nightmares of them screaming, and burning alive while I watched from behind a glass barrier unable to help them.

I remember collapsing against the wall of my quarters, howling in rage and agony for everything that I had lost. I don't remember if I cried or not. But I do know I pounded my fist so hard against the wall I broke my wrist and two fingers. After that, I limited what I listened to or did. Books seemed better to me after all that. Even reading about animals that were extinct didn't seem as bleak when it was just words on a page. I was kind of a throwback, preferring to read printed books instead of in data format. I kept in shape, mostly out of habit than any protocol or orders. I would walk around the station every now and then. I went on a sojourn for a day or two, going from the bottom most section of the reactor room to the top of the docking ports. I even donned a spacesuit and went outside. For a while that seemed to help. When I was busy, I didn't have time to focus on my loneliness. But some of the daily tasks I did I stopped finally because of futility. I realized I was hoping against hope that I was wrong, and that there were survivors somewhere. So every day, in the morning and in the evening, I'd record a message stating that I was alive, and hoped that someone could hear me. I'd send the message out on a secured channel. All I got back was static, no signals back, no reception notification from the computer. Soon I was just sending a message once a week. Then every month. And then one day, I realized it had been two years since I had started sending out the messages, and more than three years since the end of the war. I recorded one last message, and then signed off. That was why in a way, the visit from the whatever it was I welcomed even if it was brief.

About four days after it visited the station, I was getting some sun in the solarium. It was an officer perk. Inside the chamber, it looked like a tropical beach with sun and surf. It was all simulated though. I was dozing off, when suddenly the sound of the surf and wind stopped. I woke up instantly. A discrete message appeared with two words:

Something or someone was approaching the station.

I hope you enjoyed my story. Tips, pledges, and subscriptions are most welcome.